When I was about five or six years old, my parents ordered a set of wildlife encyclopaedias which arrived by post once a week. I remember the first one arriving in a thin brown cardboard box. My brother and I huddled with my mother on the bed as she opened it. The cover featured an aardvark – the alphabetical first in any animal encyclopaedia.

The photographs were what made these books amazing. At the time they featured state-of-the-art wildlife photography, with incredibly intimate images of everything from diatoms to duck-billed platypus.

But there were some species that weren’t represented by photographs but by coloured illustrations. There were only a few, but I always remembered these species because the implication was that they were rare, unseen – perhaps on the edge of extinction – and this gave them an almost mythical quality.

The New Zealand huia was one – an unusual bird with a curved beak and an extremely affectionate nature between pairs, which mated for life; the Sumatran striped rabbit was another. The huia was never seen again and is now considered extinct. The Sumatran striped rabbit, it seems, was just elusive and unknown, living hidden in the deepest, wettest mountain forests of Sumatra.

Years later, I found myself living in Sumatra and working for Fauna & Flora International (FFI) in Kerinci Seblat National Park. I learned that even 25 years on from my first encounter with the Sumatran striped rabbit illustration there was still no photograph of a living animal; in fact no researchers had seen it since 1972, and before that not for many years.

Occasionally we met locals who claimed to have seen them. They all said it was a stupid animal, very easy to approach and just pick up – a characteristic shared by the unfortunate huia, which probably helped secure its path to extinction.

Sluggish and unconcerned by humans: it didn’t sound much like the kind of rabbits I knew, which disappeared in a flash at the slightest sign of movement. But then the Sumatran striped rabbit wasn’t a normal rabbit. It lived in dense rainforest for a start, whereas most rabbits are found in open grassy areas. It had small ears and, most remarkably, a beautiful striped coat of brown and cream, like an art deco clock.

I decided to try and get the first photograph and learn something more about this almost forgotten creature. Following up on a sighting made by a Sumatran friend, I placed a series of camera traps in the location he had seen two rabbits eating fallen fruit. When searching for animals that are poorly known, it is important to use whatever scant information one can get on their habits. 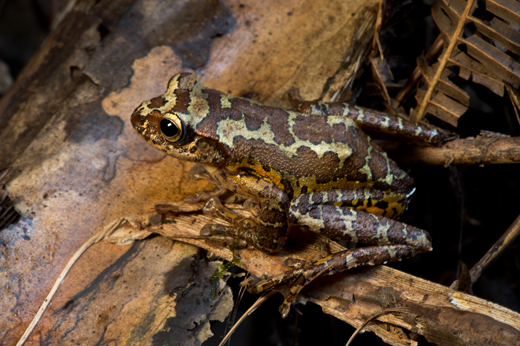 The fallen fruit was a clue. No one was sure what the rabbits fed on but fallen fruit seemed as likely as anything else, so for bait I chose a particularly aromatic type of guava that was in fruit at the time and placed 5 kg around the cameras. Three days later I went back to look. All the fruit had gone, but the film showed only forest rats making repeated sorties to steal the guavas. I rebaited and tried again.

I had placed the camera traps on an extinct volcano at between 1,800 and 2,100 metres above sea level – the known habitat of the rabbit. Each time I baited the cameras I had to make the climb with 5 kg of fruit. And each time I came back with more pictures of rats. I got civets and a rare pheasant, too, but no rabbits.

Elephants further complicated the task. Two domesticated elephants lived in the forests at the base of the volcano. They were supposedly tame, but living semi-wild had made them unpredictable. They had learned that I was making regular trips with a backpack full of odoriferous fruit, and they began to ambush me along the trail. It became more and more difficult to outwit them. A few guavas cast in the opposite direction as I tried to scurry past no longer worked. They wanted the lot, and the trip was getting dangerous.

After almost two months I reached the point of giving up. The tough climb up the mountain every few days, the rats and the elephants made me think I was wasting my time. The guavas were getting harder to find, too.

I made one last visit, without a backpack full of fruit, breezing past the elephants without trouble, to remove the cameras. Back in town I processed the film and discovered that on this last trip we had got the first picture of Sumatran striped rabbit. It was small in the frame and not an award-winning image, but the animal was caught in mid hop, and very clearly a rabbit, despite its small ears and dense jungle home. It proved to be the first photograph of this elusive animal.

Fifteen years later and I am back in Kerinci setting cameras again (this time video camera traps) and hoping to learn more about the rabbit. Recently we got FFI’s first moving footage of Sumatran striped rabbit, hopping around the forest floor – not award-winning quality footage, but it’s a start.