Two forest elephants that caused a minor local sensation after crossing the border from Guinea into Liberia have inadvertently helped to promote wildlife conservation and demonstrated the vital importance of a groundbreaking transboundary agreement between the two countries, brokered by Fauna & Flora International (FFI) and partners.

FFI’s work in Guinea focuses on the Ziama Massif, a UNESCO Man and Biosphere Reserve. Ziama harbours the last remaining population of forest elephants in Guinea – as well as other threatened species such as pygmy hippopotamus and western chimpanzee – and is a priority site for their conservation in West Africa. Our conservation efforts in this area began in 2009, with the provision of direct support to the government wildlife authority, the Centre Forestier de N’Zérékoré (CFZ).

The two male elephants, believed to be brothers, are well-known among some communities on the Guinea side of the border. Their mother was killed by poachers in 2016 – the last elephant illegally hunted in Ziama – since when the absence of a matriarch has left them slightly disorientated. Increasing pressure on their forest habitat has brought them into regular contact with people. They are frequently seen in the vicinity of villages, attracted by crops grown in the area.

FFI has been working with local communities to implement measures to deter elephants from crop-raiding. These include creating agricultural buffer zones around villages, growing foods unpalatable to elephants and using bees as a natural repellent.

Their latest big adventure has taken these elephants not only well beyond their home patch in Guinea’s Ziama Massif, but also completely outside the forest zone. As they wander at will through Liberia, their progress is being mapped on a daily basis. They are also being constantly chaperoned by rangers to protect them from poachers and ensure that curious onlookers maintain a safe and respectful distance. 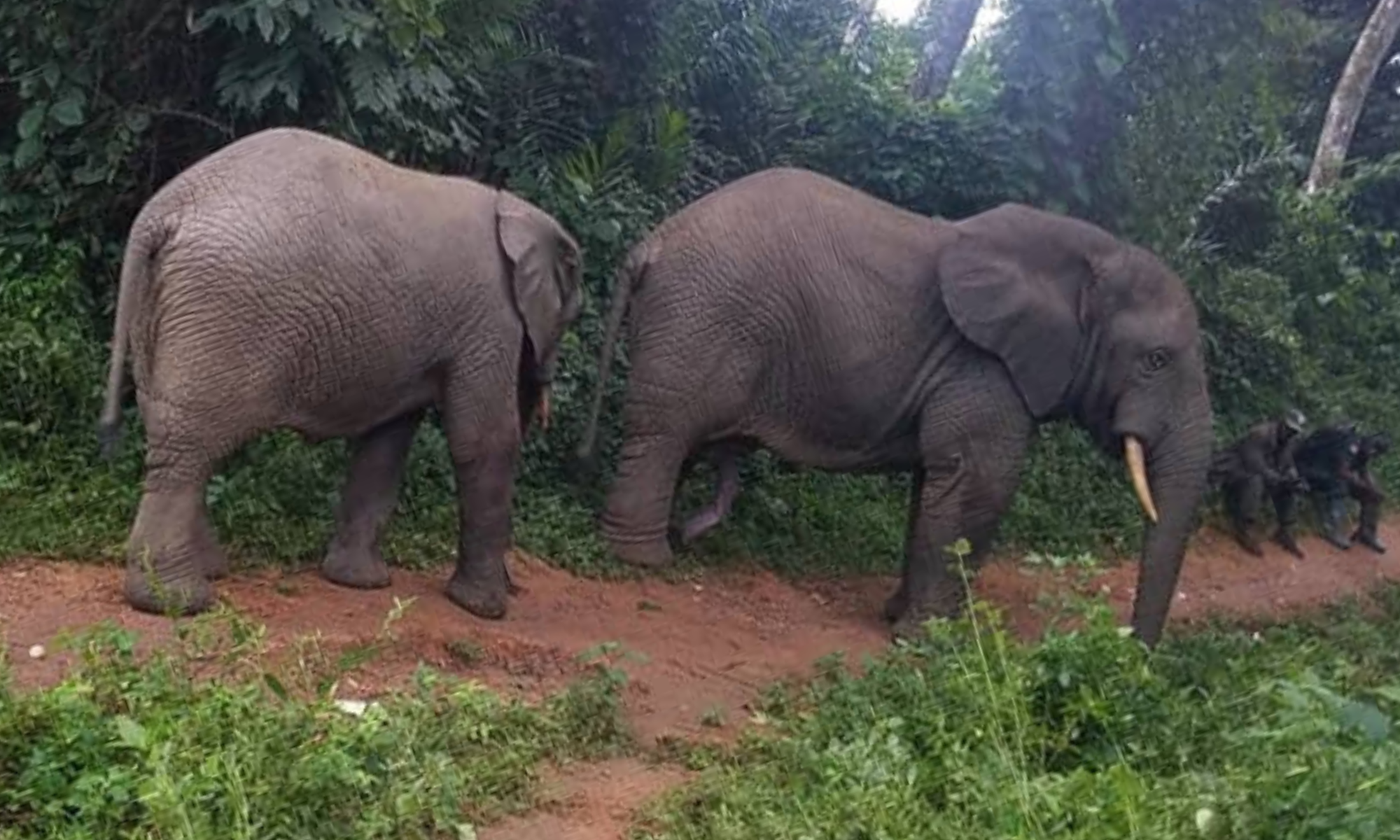 Forest elephants being guarded by FDA rangers after crossing the border into Liberia. Credit: FDA

Many locals in this part of Liberia have never seen a wild elephant in the flesh and are understandably excited by the presence of such charismatic megafauna. In every town through which the elephants pass, people are volunteering to help monitor their movements, demonstrating a genuine appreciation of wildlife.

But this fascination is a double-edged sword. People have flocked from far and wide to catch a glimpse of the powerful pachyderms, but hand-feeding, touching or posing for a selfie with a wild three-tonne young adult male elephant – however habituated to humans he may be – carries a massive risk and could end in tragedy.

FFI is providing support to government partners in both countries to help deal with the situation. In Guinea, we have funded CFZ to travel across the border in order to support and train Liberia’s Forest Development Authority (FDA) in the delicate and difficult business of monitoring and safeguarding these elephants. In Liberia, we have supported FDA in deploying rangers to guide and guard the elephants; in some instances, they have practically had to push people away and – before the arrival of CFZ – were considering enlisting the help of the police.

The Guinea officers were welcomed at the border by FDA’s most senior official and his entourage, testament to the importance that Liberia attaches to protecting the region’s unique biodiversity and a perfect illustration of how transboundary collaboration can work in practice following the signing last year of the historic bilateral agreement.

Notwithstanding concerns about the risks to both elephants and their local admirers, the reaction to their unscheduled arrival offers a glimmer of hope for the future of wildlife conservation in Liberia, where species have all too often been viewed purely in terms of bushmeat potential. 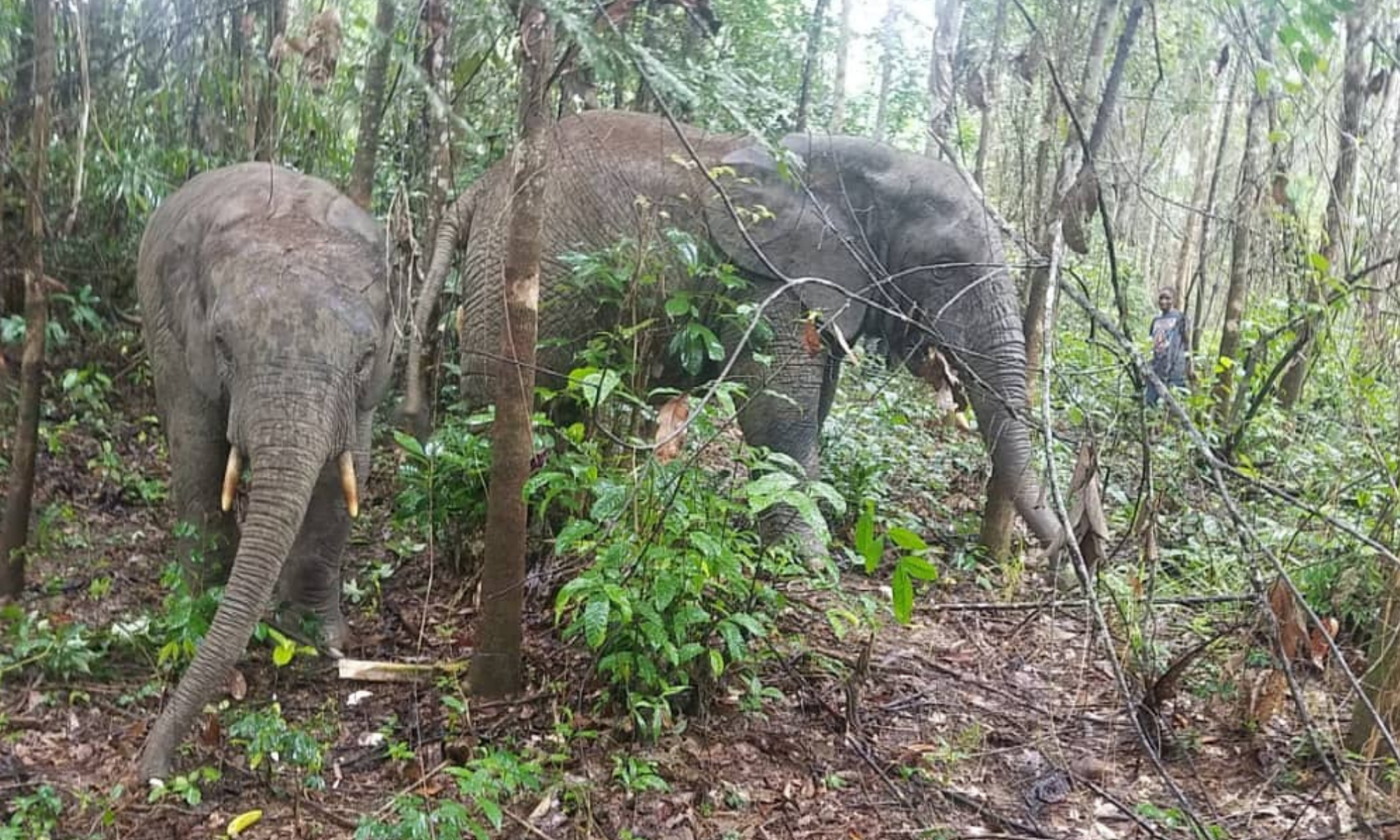 The two male elephants feeding while a member of the local community looks on. Credit: FDA

The excitement generated has created a priceless opportunity to raise awareness about the importance and plight of Africa’s forest elephants, as well as other threatened species and wildlife as a whole. Last week, Managing Director of FDA, Hon. Mike Doryen, and FFI’s illegal wildlife trade specialist in Liberia, Constant Ndjassi, took part in a radio broadcast during which they responded to the concerns of the communities and seized the chance to spread the conservation message more widely.

The news comes at a time when FFI and our partners in Liberia are keen to secure presidential endorsement of the country’s recently revised National Elephant Action Plan. Originally developed in 2016, with support from FFI, the plan was endorsed by then President Madam Ellen Johnson Sirleaf. The most recent version of the plan, complete with revisions, is ready for presentation to the current President, His Excellency George Manneh Weah, who has already expressed interest in how the issue of the stray elephants from Ziama is being addressed.

Ultimately, the fate of these elephants and other wildlife on both sides of the border between Guinea and Liberia will depend on the attitudes of the communities who live closest to them. In turn, the support of those communities will be contingent on creating a network of protected areas and forest corridors that allow for free movement of wild animals without posing a threat to people and their livelihoods.