As a boy I seldom suffered bad dreams. The occasional ones that did occur were so abstract as to be indescribable – as I learned when trying to explain to my mother why she had found me curled in the dog’s basket one night after I had sleep-walked during a childhood nightmare. It was as if my subconscious lacked a physically identifiable object of terror on which to focus. This all changed many years later after wild elephants chased me in the Sumatran jungle.

For such large animals, rainforest elephants are surprisingly silent and unobtrusive. The Asian elephant is smaller than its African cousin but a formidable beast nonetheless. Despite this, in five years of tramping about the forest, I had never seen one. I regularly came upon steaming dung piles, trampled areas where the herd had slept, or their tray-sized footprints. They even photographed themselves on my camera traps. But the living animals always eluded me. I didn’t think about them being dangerous, nor make any effort to avoid them: in fact I didn’t think much about elephants at all. 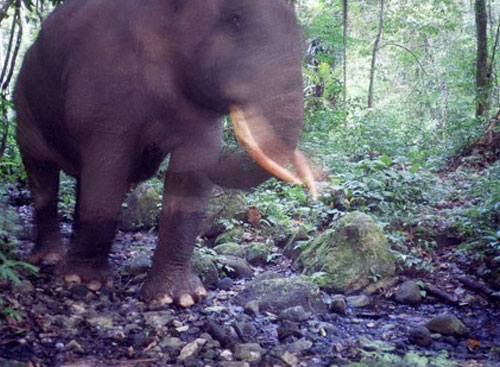 Then one evening, hiking back to camp with my guide Karno, we spied a herd moving diagonally across our path about 30 yards ahead. Karno was ready to run in the opposite direction. I stopped him. We still had an hour to walk and this was the only path back; we had to take it or spend the night out in the forest with neither food nor shelter. The elephants didn’t seem troubled. They passed single file, one after the other, across our trail. I was reluctant to let Karno to start running and frighten them.

This was a wildlife watching opportunity. I didn’t know then that Karno had a lot of experience with forest elephants, and he knew how dangerous they could be. We stood watching them pass, frozen into statues of ourselves so as not to be seen.

Suddenly, one of the animals stopped. Elephants have poor eyesight, but make up for it with their other senses. It seemed to know we where there. I began to feel uneasy. The elephant had an unfriendly look about it. I suggested to Karno we move out of sight behind a nearby tree. It was a mistake: the moment we moved the elephant charged.

The next few minutes were chaotic and dreamlike. For the first time ever, I was running for my life. I remember stumbling into some swampy ground and trying to run with my camera gear each step getting slower and heavier. Elephants can communicate ultrasonically. I am sure this is what happened, because although none of the herd made an audible sound, they were suddenly charging at us from all directions and my line of escape became a headlong dash into the path of another elephant. At one point I shouted to Karno that we should climb a tree.  The look he gave me over his shoulder could have turned claret to vinegar, and I quickly got the message that this was not a good idea.

By the time we stopped running I was exhausted and about ready to give up my life to the trampling feet. But the elephants had stopped chasing us. We had emerged at a cliff. I was prepared to start climbing down if they approached any closer. I could see one large female standing like a block of granite, unmoving. I imagined her guarding the passage of the herd. There was something primal in that standing elephant that left an impression in my mind. It was the beginning of something.

A month or so later in our remote field camp I was woken at 3am by Karno asking me about a noise coming from the jungle. I could hear katydids, a tree frog, nothing else; then, ripping out of the darkness with a shocking suddenness, a vast roar followed by a deep rumbling purr. My sleep-dazed mind heard a dragon-shriek followed by the sound of a vast body being dragged across the ground. But I knew, too, that it was the noise of an agitated elephant. My hands began to shake. Something about the vulnerable hour and these chilling roars coming out of the darkness made me feel like a frightened hominid on the prehistoric African savannah. It was a level of primal fear I had never known before, unreasoning and visceral. I abdicated all responsibility to Karno. I had made some poor judgments when we were being chased previously, and now he was in charge.

We waited to see whether the elephants (I imagined there was more than one) would come any closer. Karno built a fire of green leaves that spewed acrid smoke, while I scanned the forest with my weak torch. Another roar announced the elephants had come nearer – a couple of hundred yards. Karno’s advice was that we decamp to the river and perch ourselves on a boulder midstream until morning.

We did this, huddling on the rock like frightened monkeys. Once the sun had risen we crept back to camp, packed our things, and went home, despite the fact our work was only half complete. I knew if we let the elephants pass our camp we would likely run into them again on the trek home. I was keen not suffer a repeat of the chase sequence.

But it did not end there: previously, there had been a space in my psyche for that primal fear we label the ‘beast’ – the face that haunts our nightmares. As large as they are, during the trauma, an elephant contrived to slip into that space and I carried it back from the forest with me. And now, during times of stress when troubled dreams come, they always feature an elephant.