The villages of Trung Khanh District, less than five miles from China on the Vietnamese side of the border, are a hard place to live. Surrounded by jagged, forest-clad mountains, scorching summers give way to freezing winters that can bring snow. Subsistence is also a challenge, with agriculture restricted to flat, narrow valleys.

This area of remote Cao Bang province, a bumpy 12-hour bus ride from the country’s capital city of Hanoi, is among the poorest regions in Vietnam, and largely populated by members of the Tay and Nung ethnic minorities. The local economy is largely driven by farming of crops such as rice, cassava and corn. The forests of Trung Khanh are also home to the Cao-vit, or eastern black crested gibbon, a critically endangered primate species only found here and in China’s nearby Guangxi province.

The Vietnamese section of the gibbon’s habitat is part of a protected nature reserve spanning 1,656 hectares and operated by Trung Khanh’s Cao-vit Management Board. Nong Van Tao, the board’s director, said through a translator during a recent interview that the body has five staff members, including three rangers, a vice director and himself. The board’s numbers fall a bit short of the central government’s mandate of one ranger for every 500 hectares of protected forest. They have but one ranger for every 552 hectares of the reserve. 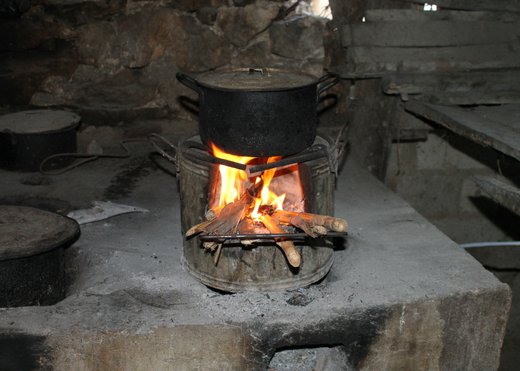 A tea kettle boils atop a TK90 stove provided by FFI Vietnam. Photo by Michael Tatarski for Mongabay.

Speaking at his office on a gravel road outside of Trung Khanh town, Tao said their goals are just as much for the people of the region as they are for the animals.

“We want to successfully conserve the gibbons and other wildlife while increasing livelihood development,” he said.

In partnership with conservation organization Fauna & Flora International (FFI), the management board is pursuing two programs aimed at achieving both objectives, starting with reducing reliance on firewood.

Trung Khanh’s residents rely on firewood for cooking, often chopped down in nearby forests where the gibbons live. Thus, one of their initiatives aims to provide fuel-efficient stoves to local communities.

According to Nguyen Duc Tho, communication and education officer at FFI, interested residents can choose from two stove models the nonprofit provides at a discounted price: the TK90 and the He Xanh C16.

“FFI had a village meeting and introduced both models,” he said during a recent village visit. “We know they save wood and are easy to move, and are more effective, but people have to learn how to cook on them, so if they choose one we support 50 percent of the cost.”

Tho says the TK90 retails for $11-$16, but under this program they are discounted to $9-$14. Meanwhile the He Xanh C16 normally costs $11. These may seem like small sums, but according to Vietnam’s General Statistics Office, Cao Bang’s poverty rate (which includes households making under $20 per month) is nearly 25 percent.

Villagers embrace use of stoves

One village that has embraced the stoves is Phia Siem. The area is teeming with cows, water buffalo, chickens, geese, pigs and goats that scamper across the narrow path or laze about in the fallow, dry-season rice paddies.

The cinderblock-and-wood home of Luong Van Khon, a farmer, is lit by bare light bulbs. Piles of dry rice and corn sit in the attic, while the bedroom is delineated by nothing more than a thin curtain. He offers cups of bitter tea and explains through Tho that he has used two types of stoves offered by FFI, an old model over a decade ago and now the TK90 stove.

“I got one model in 2005 and another last year,” Khon said. “Compared to the traditional way people cook here, the new model is easier, quicker and more effective.”

Leftover cooking scraps such as corn husks can also be used to build fires in the stoves, unlike older versions.

“There’s no need to go into the forest to collect wood because I can go around my home and collect enough wood and material for the stove,” he said.

Luc Thi Ngan, a resident of neighboring Da Be Village, also finds the stoves to be a huge step up from the ones she previously used. She has both of the most recent models, and used the He Xanh C16 to boil tea during a visit. 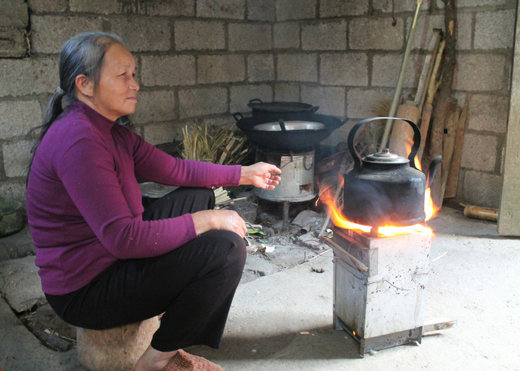 Luc Thi Ngan prepares tea on her He Xanh C16 stove in Da Be Village. Photo by Michael Tatarski for Mongabay.

“If you use the new model and dry the wood there isn’t much smoke, which is also an improvement,” she said. Smoke is a health hazard in these poorly ventilated, often windowless homes.

She also finds them to be more efficient.

“Bundles of wood last six days with the stove, while on old models they only lasted two or three days,” she says. “It saves me a lot of time since I don’t need to go into the woods, and it only takes 10 minutes to boil a kettle, while the old ones took 30 minutes.”

Such livelihood improvements benefit both the people and primates living around Trung Khanh, even if locals don’t always make a personal connection to the importance of the primates in the nearby woods. According to Khon, “people don’t know about the value of the gibbons or the value of conservation, but they know about them and how rare they are.” But appreciation for their primate neighbours could change. He said that when daily tasks become less strenuous, the benefits of conservation efforts can become more apparent.

“When stoves save wood it makes people’s lives easier and also helps the gibbons, since when people don’t cut wood the trees grow up and they have more food,” he said.

Another initiative spearheaded by FFI trains farmers to grow elephant grass, which can withstand Cao Bang’s frigid winters and regrows faster than normal grass. Tao, from the management board, said that for now the grass covers a dispersed amount of land just large enough to provide some much-needed elephant grass feed for livestock.

Foraging for livestock feed has traditionally been another time-consuming task for farmers and is also a threat to the gibbons’ habitat. Hoang Van Quy, a farmer in Phia Siem, asked to take part in the elephant grass program when FFI introduced it. 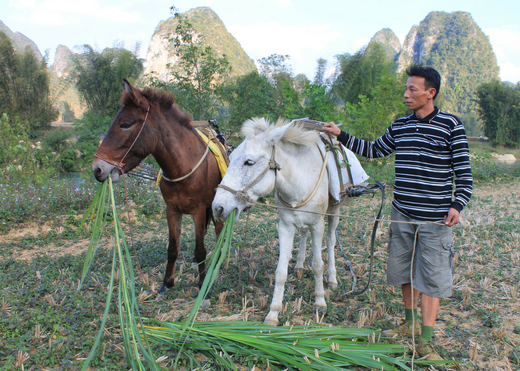 Hoang Van Quy feeds elephant grass to his two mules outside of Phia Siem. Photo by Michael Tatarski for Mongabay.

“I started with 1,000 square meters [nearly 11,000 square feet] of grass and it has grown since then,” Quy said. “I’m now buying material to build a fence to protect the grass, since it’s very important to me.” He added that now he has no need to forage in the forest to collect food for his livestock.

Quy explained that more farmers want to grow elephant grass, but land is limited in the stunning valley, which is hemmed in by sharp ridges.

Trieu Van Thang, another farmer in Lung Hoai Village, has been growing elephant grass for six years and is now reaping the financial rewards. His roughly 32,300 square-foot plot allows him to grow extra grass and sell it during the summer, all while providing feed for his four water buffalo so he doesn’t need to go into the forest.

In extremely poor villages such as Lung Hoai and Phia Siem, primate conservation typically meets with success only if it concurrently improves local livelihoods. Farmers interviewed on a recent trip to the area knew about the Cao-vit gibbons, in part thanks to education initiatives carried out by FFI – but their primary concern is to make daily life less difficult.

Trieu Thi Khoai, a village leader in Lung Hoai, made this clear during a visit to his simple home. A muted World War II documentary played on national television in the background while he offered shots of home-made rice wine as a greeting.

“People want to use the stoves because they save wood by about 50 percent,” he said. “This allows time for other work because we don’t have to go out to collect as much wood.”

Khoai said that the portability of the stoves is also beneficial, as they can cook outside when the weather is nice or be taken to another house when a neighbour has a party.

One of the water wheels that makes up Trung Khanh’s complex irrigation system. Photo by Michael Tatarski for Mongabay.

Tao, management board director, shares that other projects have contributed to curbing deforestation as well. For example, key components of the wooden water wheels that make up part of the area’s intricate irrigation network are now made of steel. As a result they are much more durable, and farmers no longer need to cut down trees for material to repair the wheels.

Thanks in part to these initiatives, local residents now rarely encounter the gibbons since they have less need for resources from the forest.

Khon, the farmer in Phia Siem who has received two FFI stoves over the years, said he used to see the primates when he was younger and logged in the forest to sell wood to China. “Now, however, I don’t go into the forest so I don’t see or hear them,” he said.

This article was originally written by Michael Tatarski for Mongabay and has been reproduced here with permission.