Li Xiaoya, a member of the Yao Minority, is one of Fauna & Flora International (FFI) China’s dynamic Programme Officers. She was born in eastern Guangxi, and at the age of four was swimming in the clear waters of the Lijiang River in the world-famous and dramatic karst limestone landscape near Guilin, Guangxi Province.

Before long, she was exploring and playing in caves with her friends, and some years later she produced a beautifully illustrated book on the biodiversity of Guangxi’s limestone hills as part of an FFI project with the European Union.

It is thus rather appropriate that she has been a key figure in the organisation of an unusual symposium – on karst and cave biodiversity – attended by Chinese and many other nationalities. It is the culmination of a 5-year project by the province’s Forestry Bureau, financed by the Global Environment Facility (GEF) and implemented by the World Bank.

Karst landscapes are formed when soluble limestone is eroded and dissolved over time, leaving behind a terrain of dramatic peaks and caves. 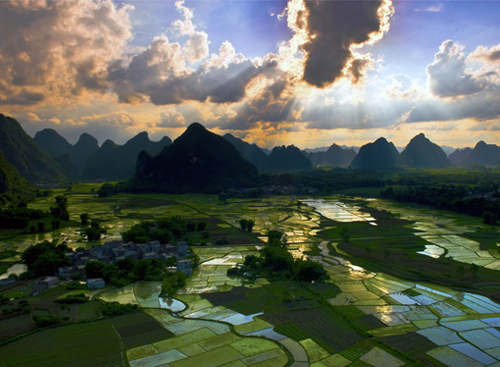 These landscapes are extremely important for biodiversity, because the highly alkaline nature of limestone hills combined with the dry soils and the presence of caves create conditions that require animals (and indeed plants) to adapt and evolve. Many species are restricted to a single hill or cave system as they unable to cross the non-limestone habitat in between, while for others the steep and inaccessible limestone towers have become a final refuge from hunting and habitat loss.

Guangxi Province in southern China is very significant for karst, with some 40% of its surface covered in karst limestone towers and cones.

FFI first got involved with the World Bank/GEF project during the preparation stage 7 years ago. Then, about four years ago, our work with cao vit gibbons down near the border with Vietnam led to the creation of a new nature reserve. And this involvement has continued to the very end, with FFI staff helping to organise the symposium. 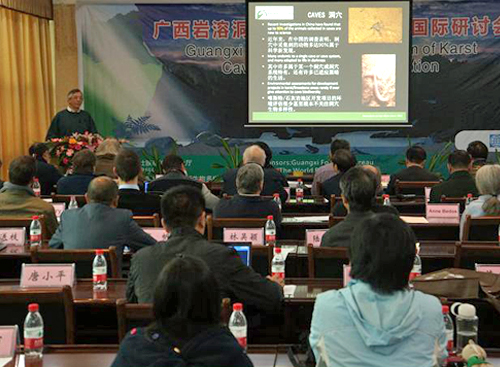 Tony Whitten takes to the podium at the symposium. Credit: Lin Wuying/FFI.

The FFI team in China was led by Dr Zhang Yingyi (the Programme Director), Lin Wuying and of course Li Xiaoya, and they facilitated everything in a first-class fashion.

A major focus of the project was to investigate the region’s invertebrate cave fauna, and – wow – how it succeeded!

Between 2005 and 2012, local and international scientists found and explored 117 caves across the province, and collected nearly 10,000 specimens– the largest ever effort to document tropical and subtropical karst cave fauna.

Of these specimens, just over 500 individual species were collected, 150 of which were unknown to science. About 50 have now been described and named (38 of them from caves).

Around half of the 500 species found are unable to survive outside caves and almost all are endemic to Guangxi. Indeed, many species seem to be restricted to a single cave.

It is now clear that the level of diversity and adaptation of Guangxi’s cave fauna – from its fish to its beetles, millipedes and springtails – is unrivalled anywhere in the tropics or subtropics.

The project has uncovered the richest cave fauna anywhere in China and continental Southeast Asia. This really is the new ‘global hotspot’ for biodiversity.

One afternoon, during the symposium, we were all taken to the village of Dacai where there is a cave that is a few kilometres long and fairly easy to access. 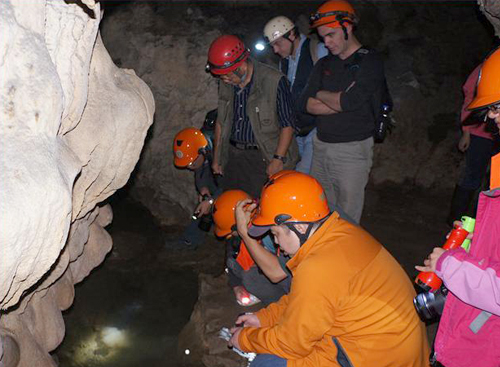 The symposium participants take break with a cave visit, and come across a blind fish (Oreonectes macrolepis) in the cave’s small river. This cave is the only place on Earth where this species can be found. Credit Lin Wuying/FFI.

Amazingly, within an hour we had seen seven species of cave-adapted (white and blind) animals: a fish, a shrimp, two woodlice, a millipede and two crickets (one of which was a species never found before our visit and was totally without eyes).

The larger woodlouse was of a known – but undescribed – new genus, and the collection of another male made the day for Stefano Taiti of the Italian National Research Council because now he has enough (three specimens) to finish the taxonomic paper which will give it a name. 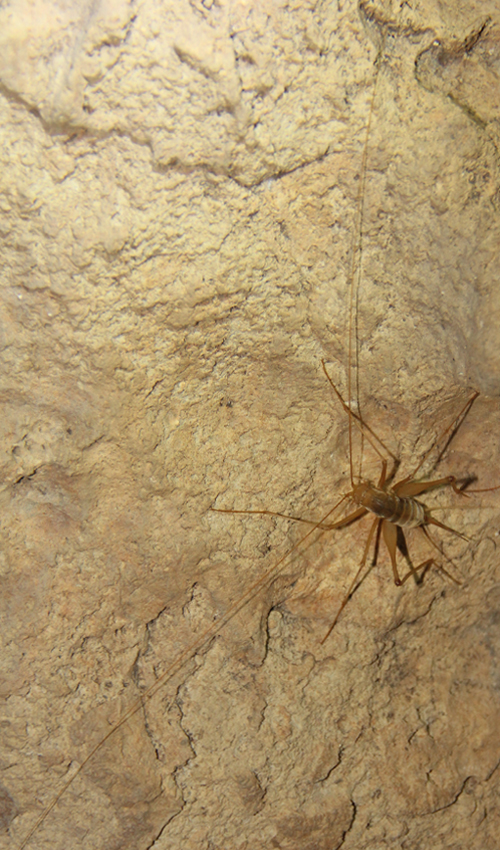 This cave cricket has no eyes, but compensates for this with its incredibly long and beautiful antennae. Credit: Lin Wuying/FFI.

After the symposium, I went with the FFI China team and Neil Furey (a renowned Asian bat expert from FFI Cambodia who was also a symposium participant) to meetings with the province’s Deputy Governor, the Vice President of Guangxi University, and the Deputy Director of the Environmental Protection Bureau to discuss next steps.

In her closing speech at the symposium, Ms Liu Jin, head of the World Bank team that has been managing the project from the outset said, “I really feel that, although the project is closing, this is not really the end but actually the beginning.”

Can Asia’s karst landscapes with their incredible biodiversity be protected from development and exploitation for cement? We are quietly optimistic.

And we can be sure that Li Xiaoya will be ready to help.