Back in 2011, whilst planning a trip to Colombia to help run a scientific journal-writing workshop, I found myself carefully studying a map of the country which was dotted with 31 pins, each representing the location of a project funded by the Conservation Leadership Programme (CLP). To make the most of my trans-Atlantic trip, I wanted to take the opportunity to visit a project and see what sort of results CLP funding was yielding on the ground. But with so much interesting work going on throughout the country, how to choose?

Maps can be quite deceiving, and all of the projects seemed within relatively easy reach from where I was looking, sat at my desk in Cambridge. But Colombia is large country which is in fact only slightly smaller than France, Germany, Switzerland, Belgium and the Netherlands combined.

In a country this size therefore, there were some practical considerations (cost, time, feasibility) to guide my decision as to which project to visit. In the end, one project ticked all the boxes, and to my delight it was an amphibian project that centred on a poison dart frog discovered by a CLP-funded team.

As with most new findings, the discovery of the Supatá’s golden frog in 2007 made headlines around the world for a number of reasons. For one thing, it is a beautiful creature, and for another it is only found in small patches of forest in the municipalities of Supatá and neighbouring San Francisco. What’s more, it was discovered at a time when amphibians (frogs, toads, salamanders, caecilians and newts) are experiencing a global extinction crisis mainly due to habitat loss, changing land-use patterns, climate change and an extremely virulent fungus called chytridomycosis.

Amphibians are the most threatened vertebrate in the world, with at least 40% of all known amphibian species at risk of extinction. That alone should be reason enough to bolster conservation efforts, but they also play an important role in maintaining both healthy ecosystems (pest control) and healthy people (not only do they eat  mosquitoes, research on amphibians has led to the development of painkillers and medicinal advances for the treatment of cancer and HIV).

There are limited sources of funding for amphibian projects (the CLP being one of them) perhaps because frogs and toads aren’t perceived to be as attractive to donors as the more traditionally charismatic animals such as primates or big cats. And yet a relatively small but significant amount of funding can go a long way to saving a frog species.

A symbol of natural heritage

I arrived in Bogotá straight off the back of a 2-week leadership training course in Canada, but was soon revitalised by a couple of shots of Colombian coffee administered by my hosts Jenny Gallo, Fabian Tavera and and Yeison Bello from Fundación Ecodiversidad. Soon after, we set off on a 2-hour bus journey through rolling hills to Supatá – a charming agricultural town with a history dating back to colonial times.

As luck would have it, my trip coincided with a festival celebrating the town’s rural traditions, which gave me the chance to meet with some of the project’s stakeholders who had gathered from across the region to enjoy the occasion. 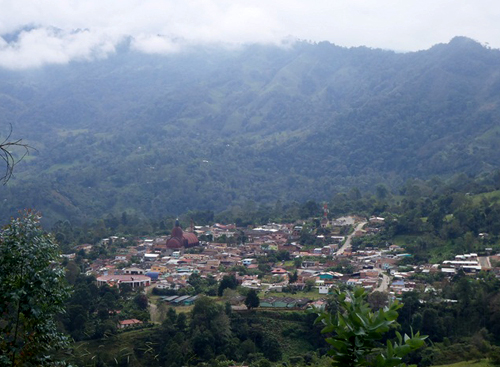 Thanks to the hard work of Jenny and her team in conducting research and raising awareness about the plight of amphibians, everyone I met could tell me about the little frog which had been found in a nearby patch of their forest.

Local politicians had acknowledged the significance of the finding (and the team’s project) by formally declaring the Supatá’s golden frog as a symbol of the municipality’s natural heritage. To demonstrate its importance they had even erected a statue of the frog in the town square, which Jenny was proud to show me. Throughout my stay I saw its picture popping up all over the place – on posters, calendars, billboards and shop fronts all around town.

Another important event that took place during my visit (which will help determine the future of the Supatá’s golden frog) was the launch of a new educational booklet to teach young environmentalists about the importance of maintaining healthy forests and waterways for the sake of people and wildlife. It proved to be a popular tool for the children, especially when combined with fun outdoor learning activities and a trip to the patch of forest where the frog is found.

A festival for the frogs

Last month, I was reminded of my trip when Jenny contacted me about the 5th Annual Golden Frog Festival. Although she had told me about the previous year’s festival by email, now I could imagine myself there – the air filled with the sound of music, the mouth-watering aroma of barbequed meats, and the sense of pride in a small frog with a big significance. 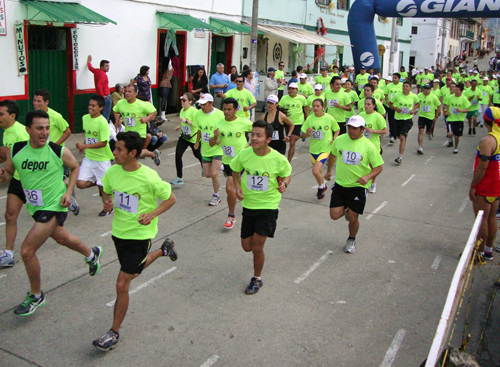 In addition to the array of music and dance acts, street processions, beauty contests, theatre, environmental competitions and educational activities which had taken place over the previous four festivals, Jenny had also organised something new to keep the community engaged. 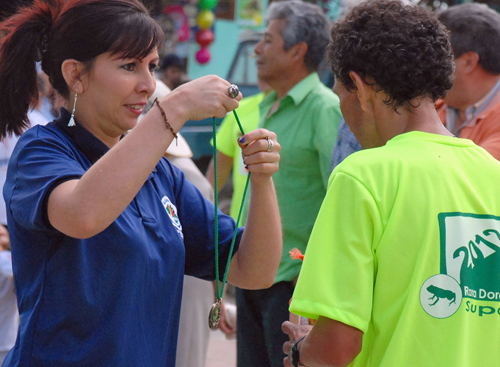 Having spent most of 2012 taking part in runs around Colombia for numerous social causes, Jenny decided it was about time that the frog got its own race too. After months of planning, her plan came to fruition on 9 December in an astonishingly successful event, during which 250 runners (ranging from trained athletes to local fun-runners) crossed the finishing line of a 10 km circuit around the town to raise funds to re-establish areas of suitable amphibian habitat.

For me, it just goes to show the power that a single species can have in galvanising action, even if it’s not ‘cute and fluffy’.