Crocodiles and conservation: how evolution gets it right

Crocodiles hold a fascination for us. A casual browsing of Discovery or National Geographic Channel scheduling will validate this observation. It is true that people seem most attracted to animals that either resemble us in some way – penguins, orang-utans, meercats – or those that occasionally eat us – lions, sharks, and of course, crocodiles.

But there seems more to our fascination with crocodiles than their potential as dangerous predators. A recent close encounter with a crocodile gave me a chance to reflect on the nature of these extraordinary beasts. It was a Critically Endangered Siamese crocodile, a species never known to attack humans – something borne out by the reliefs at Angkor Wat in Cambodia that show enemy soldiers cast into the water while nearby crocodiles snack on fish.

Although not a mortal danger, even a hatchling Siamese croc has a mouth like a mousetrap lined with carpet tacks, and one must take care not to get bitten. The croc I held was considerably bigger than a hatchling, and a careless moment might have cost me a finger.

But it was not fear of injury that most concerned me.

Crocodiles are such alien creatures. The body is muscle sheathed in amour, while the face is immobile and registers no emotion. The green eyes are inscrutable; the black calligraphic stroke of the pupil gives nothing away. You can read little of the crocodile’s intention in that narrow slit, but rather feel the distant secrets of the past and how utterly lost they are to us. 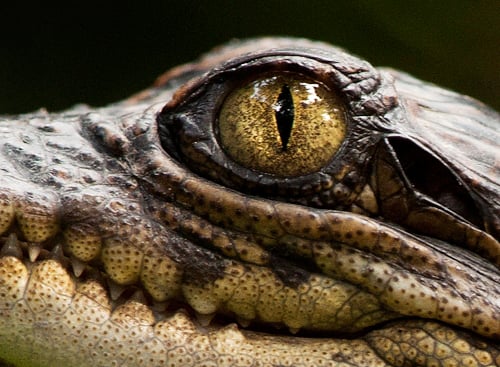 The inscrutable green eyes of the crocodile. Credit: Jeremy Holden/FFI.

The crocodile seems to have inherited a profound knowingness of time and the vast indifference of nature. This is the real thrill of crocodilians: bearing witness to an evolutionary success, a survivor of 200 million years. In the presence of a crocodile we are like a newborn baby in the arms of a centenarian – they, in their various forms, have been around a hundred times longer than us. Their silent expressionlessness intimates the chilling thought that the secret of existence is a cold and predatory thing. 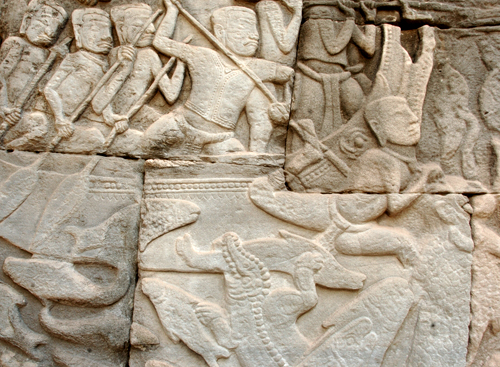 Evolution is an incredible mechanism that has produced the wealth of species that share our planet. Evolution is the result of a common problem: how a given species can best survive in and utilise a given environment.

Crocodiles seem to have cracked the evolutionary code and are graced with a characteristic that makes them almost indestructible: the ability to enter a state similar to a living death.

They can go for over a year without food, use land but stay submerged for long periods, and slow their metabolism to require mere sips of breath and a few heartbeats a minute. It was these abilities that allowed them to pass through catastrophes that caused many other forms to vanish.

Today’s crocodilians share the same basic traits, from the mighty saltwater crocodile to the dwarf crocodile of West Africa (although even this most diminutive of the crocs can reach lengths of 6 feet). They are all semi-aquatic carnivores with a familiar morphology. But this wasn’t always so. Fossil evidence for many crocodile ancestors is fragmentary, and some of the biggest species to have ever lived are known (such as the monstrous Deinosuchus, or ‘terrible croc’) only from teeth and bone fragments.

Recent excavations in the Sahara have shed light on the range of crocodile diversity in the past. During the Cretaceous Period, when this area of the planet was a swampy wilderness crossed by large rivers, crocodiles had diversified much as mammals have done today. The largest, Sarcosuchus, at 12 metres and 8 metric tonnes was believed to prey on dinosaurs, while a miniature relative, Anatosuchus, at 70 cm was partially vegetarian.

Evolution has left us today with 23 species of crocodilian, a quarter of which are Critically Endangered.

One of these is the Siamese crocodile, a freshwater species that has had its own brush with extinction. Rediscovered by a Fauna & Flora International (FFI) expedition team in Cambodia over a decade ago, this species has become the focus of a successful project whose aim has been to reverse the trend that has put the Siamese crocodile on the IUCN Red List.

Over the years, the Cambodian Crocodile Conservation Programme (CCCP) has itself made an evolutionary journey. The rediscovery of the Siamese crocodile in the Cardamom Mountains has led to monitoring work, education programmes with the local minority communities, camera trapping, nest protection, radio tracking of individuals to learn more about how they live, and even moving wild crocodiles from habitats threatened by dam construction. 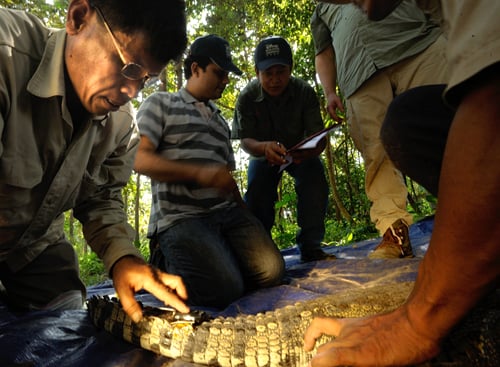 SornPiseth from the CCCP attaches a radio-tracking device to a Siamese crocodile, allowing the team to monitor crocodile movements. Credit: Jeremy Holden/FFI.

The latest initiative is a captive breeding programme that has produced captive-born crocodiles ready to be released into the wild. The project has become as streamlined and intent as the animal it is trying to protect. And with a long-serving team of motivated nationals, most who have been with the project since the beginning, it also seems to have cracked that evolutionary code.

My first experience with the project was over a decade ago when I spent a long and fruitless month sitting in hides trying to get some photographs of wild Siamese crocodiles. From dawn ’til dusk I sat motionless in the hides, getting some photographs of birds, but no crocs. In that time I saw only one crocodile, no more than a gnarly head patrolling a deep river pool. It was too far away to photograph.

Hunters had made Siamese crocodiles wary, while fishing nets had decimated wild populations. Young crocs are easily caught and drowned in nets, and the first croclet I ever held was one rescued from a fishing net.

Years later, I was to work with the team again – this time using the more successful approach of camera trapping to get our first pictures of wild crocodiles. I was also with the team when they released crocodiles hatched from eggs collected from a wild nest (an initiative to counter the high rate of egg predation by monitor lizards and pigs), and again when the first captive-born crocodile, a toy-sized little monster, was blessed by monks from the nearby pagoda. 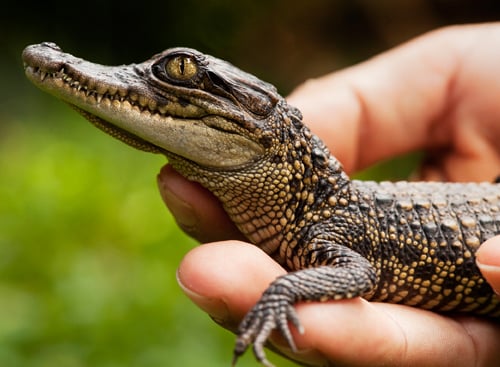 And I was there to see the first wild-release crocodile slip like a shadow across a sunlit sand bar, testing out the new element of fresh flowing water. As the crocodile appeared to dissolve back into the dark water, a group of conservationists on the riverbank were proud to see this project come full circle.

But also I couldn’t help but feel a sense of sadness to reflect that after surviving asteroid collisions, droughts and volcanic winters, human beings are the one catastrophe that has seriously threatened the crocodile. We are also the ones with the power to save them: as the motto for the CCCP goes, “The future of Cambodia’s crocodiles is in our hands.”

Acknowledgement: Thanks are in order to all the people that have allowed me to be involved in the Cambodian Crocodile Conservation Programme since its inception in 2000. Dr Jenny Daltry, Boyd Simpson, Adam Starr and Sarah Brook have all managed the project at some point and welcomed my input; while their Cambodian counterparts from Forestry Administration – Sam Han, Hor Leng and Sorn Piseth have worked tirelessly on the project for 12 years and assisted me many times in the field.