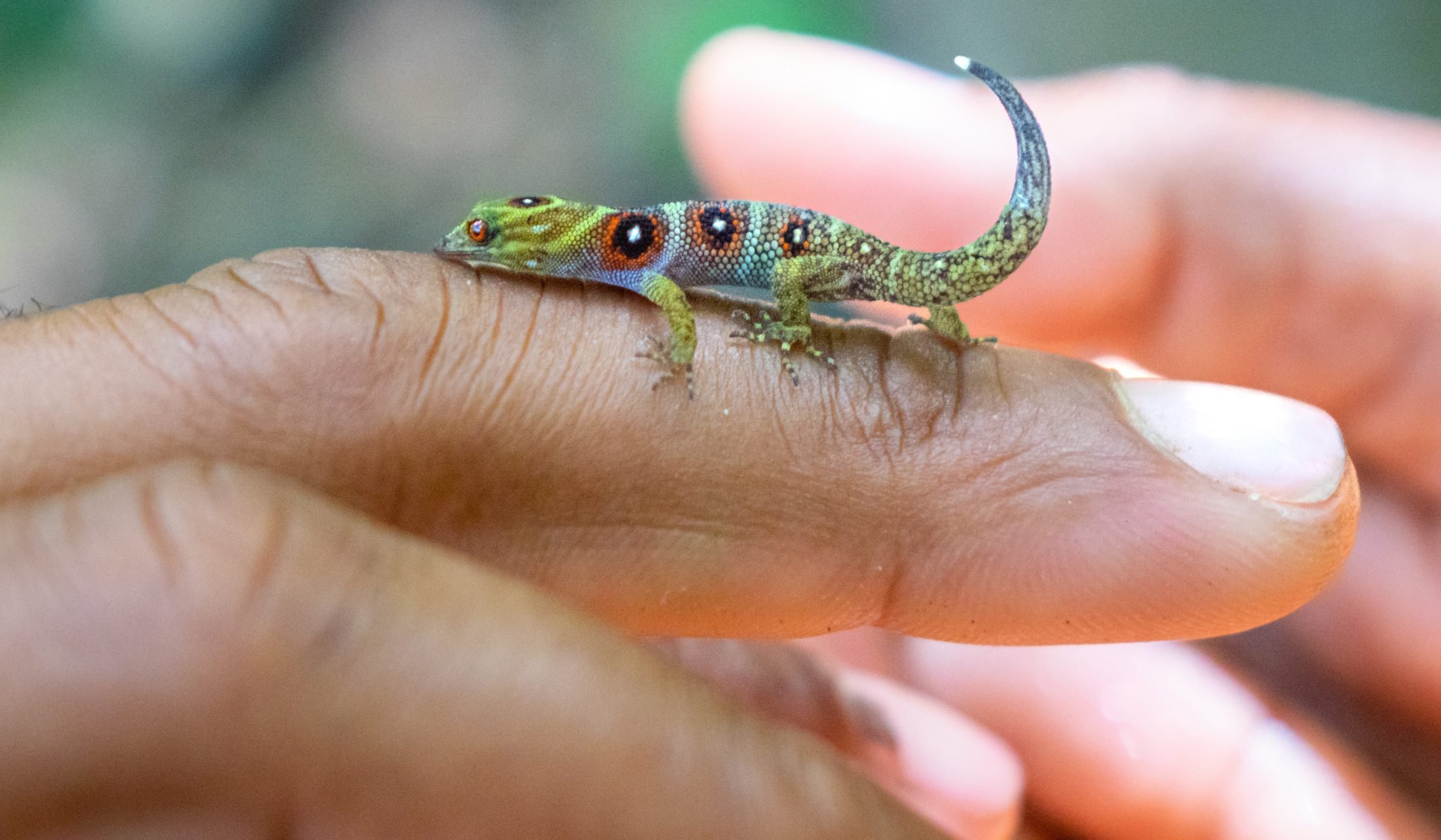 Cast your mind back to the year 2000. While the world was waking up to a new millennium, Fauna & Flora International (FFI) was busy breaking new ground, leading a series of expeditions into Cambodia’s vast, remote and virtually unexplored Cardamom Mountains.

The country was still reeling in the aftermath of the tyrannical Pol Pot regime and a more recent coup d’état, but FFI was determined to go boldly where few had gone before, in order to ensure that nature conservation was integrated into post-crisis recovery in Cambodia. 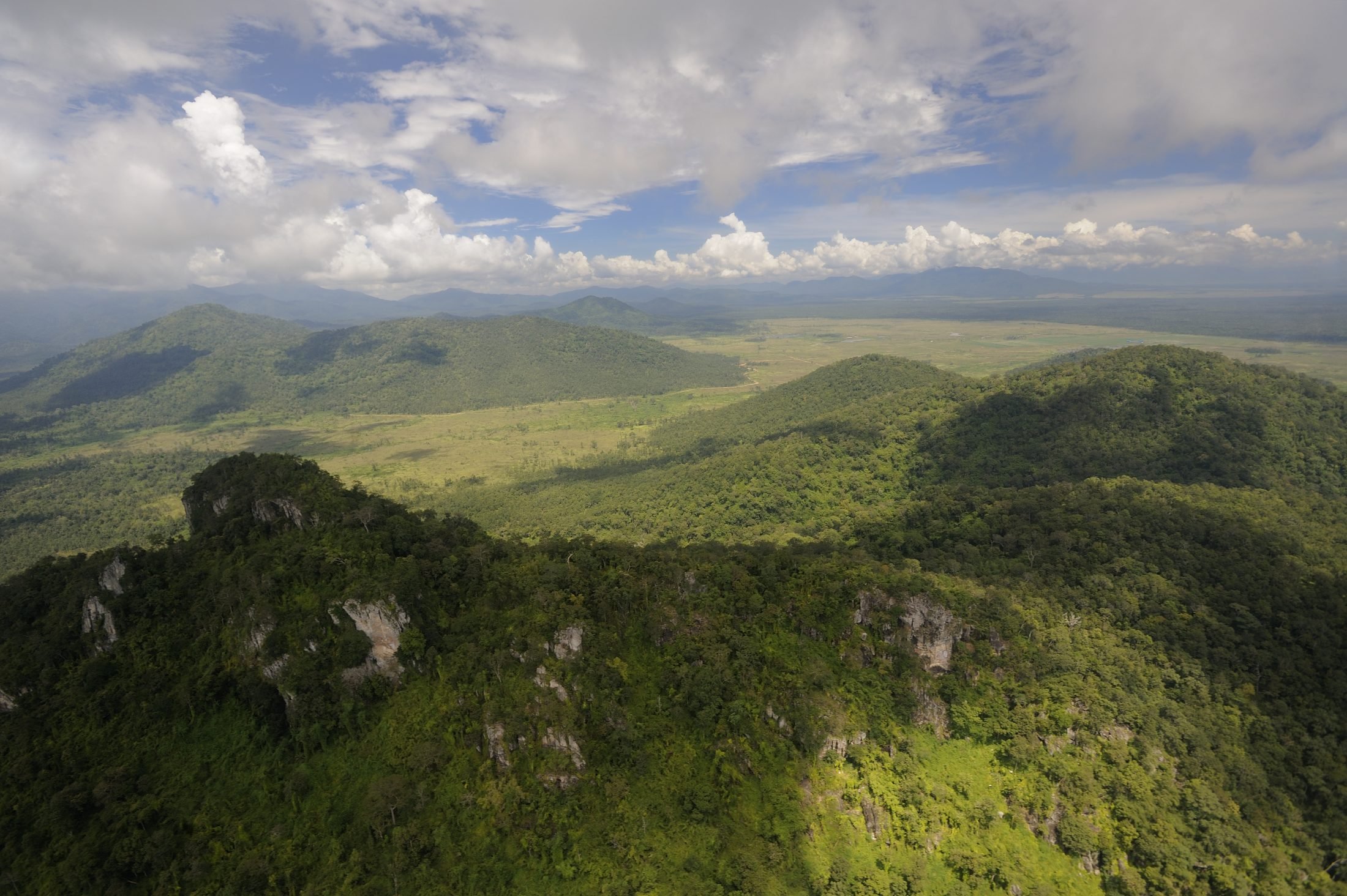 Those first biological surveys unearthed some spectacular discoveries, including 400 unidentified species and globally significant populations of endangered wildlife. One of the most momentous finds was the rediscovery of the Siamese crocodile, which had been presumed extinct in the wild.

But that reptilian revelation was merely the tip of the crocodile snout. The teams tracked down everything from green-blooded, turquoise-boned frogs to a rare relative of the parasitic rafflesia and, tantalisingly, traces of tiger.

We can’t begin to do justice to the cornucopia of creatures found in the Cardamoms, but here’s a brief description of some of the charismatic mammals that call these forests home, including several that may be unfamiliar to most.

The dhole is Asia’s very own wild dog. Like its better-known and more colourful African counterpart, the dhole is a highly sociable pack hunter, but numbers of this elusive animal continue to decline. It shares the dubious distinction of being officially categorised as Endangered on the IUCN Red List. 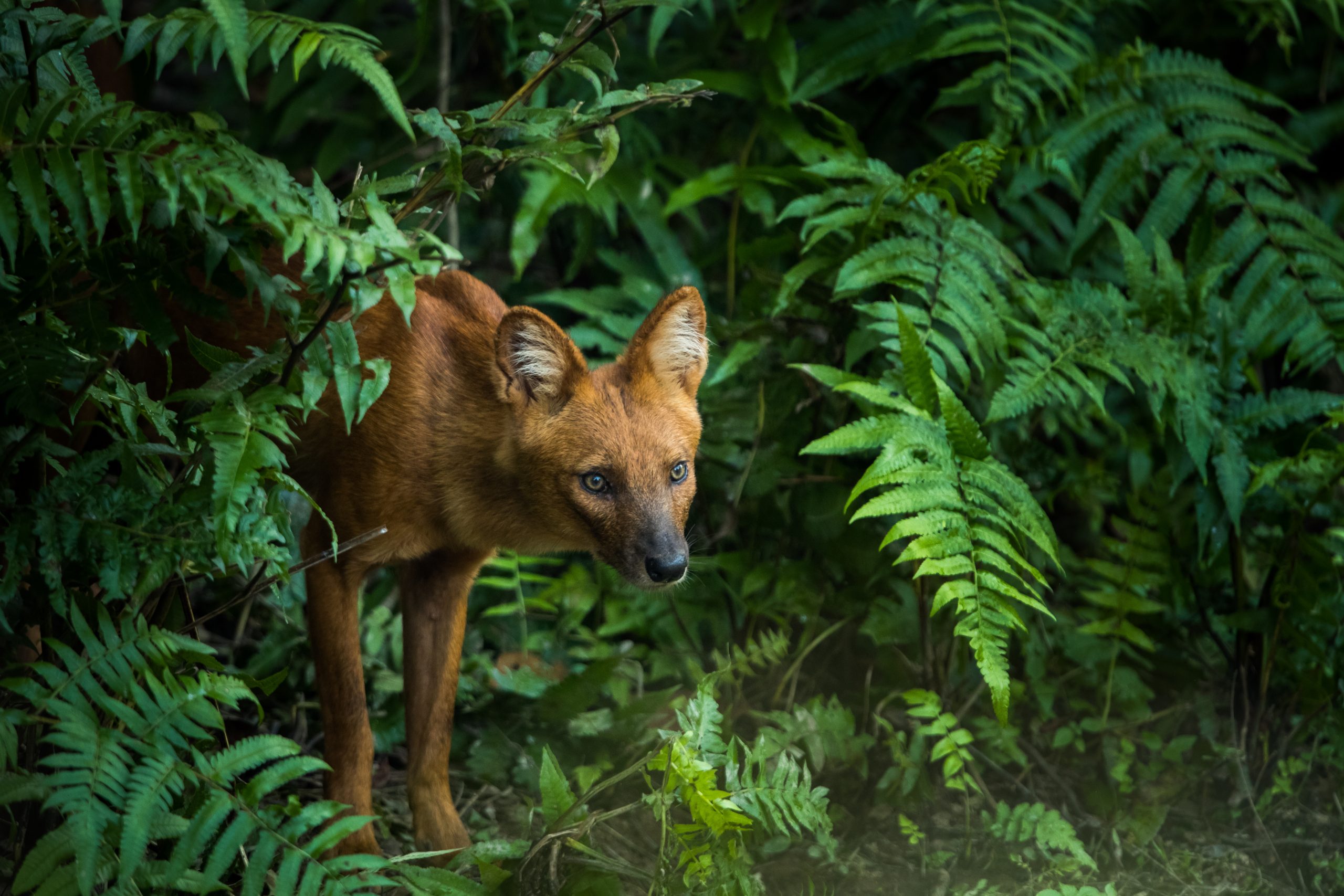 Threats to the dhole include loss of prey, disease transfer from domestic dogs, and habitat loss. Credit: Lab_Photo/Adobe Stock

The gargantuan gaur is the largest of all wild cattle species. Looking for all the world like a cow on steroids, it is the bovine equivalent of a musclebound gym bunny. These formidable animals still survive in small, fragmented herds in mountainous forests such as the Cardamoms. 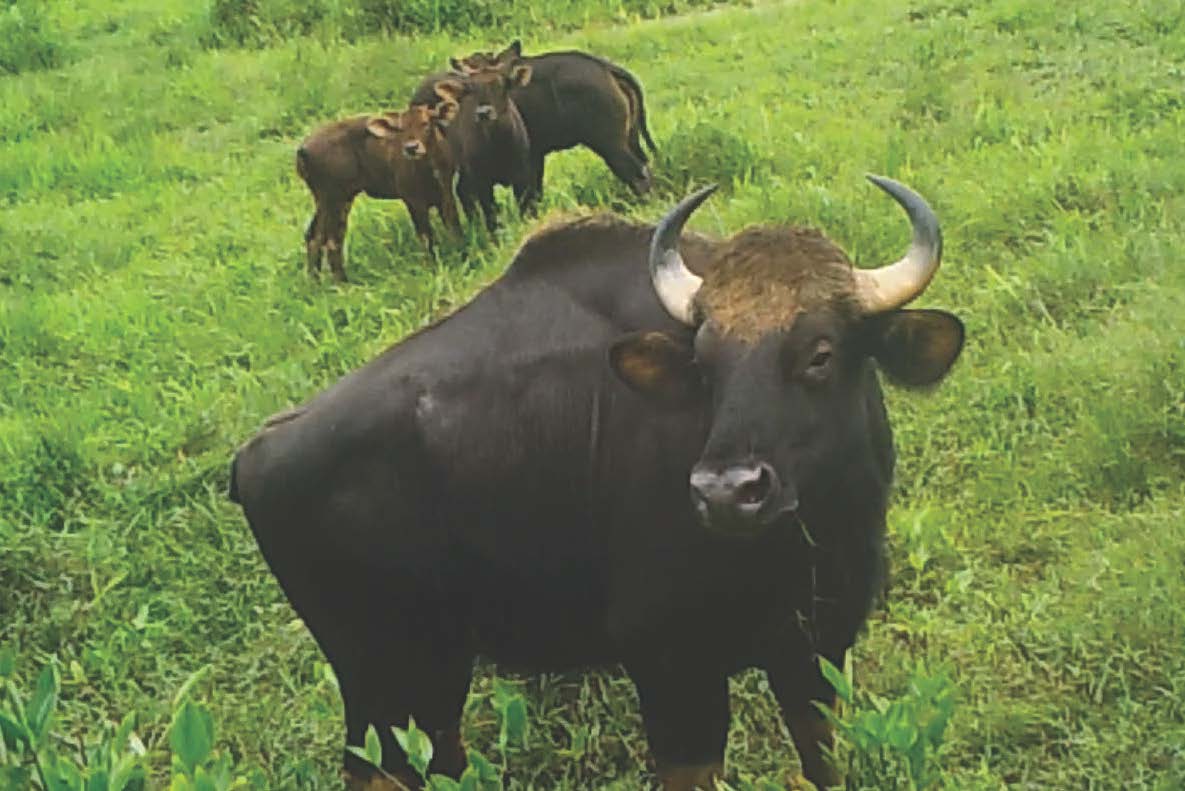 A gaur bull can weigh as much as one tonne and measure well over three metres in length. Credit: Fauna & Flora International

Variously described as goat-like or antelope-like, the serow is a medium-sized mammal that favours rocky, forested hillsides. Both sexes are blackish in colour with a conspicuous mane, a slight beard and a pair of short horns. Targeted by hunters for their meat and horns, serows are increasingly scarce. 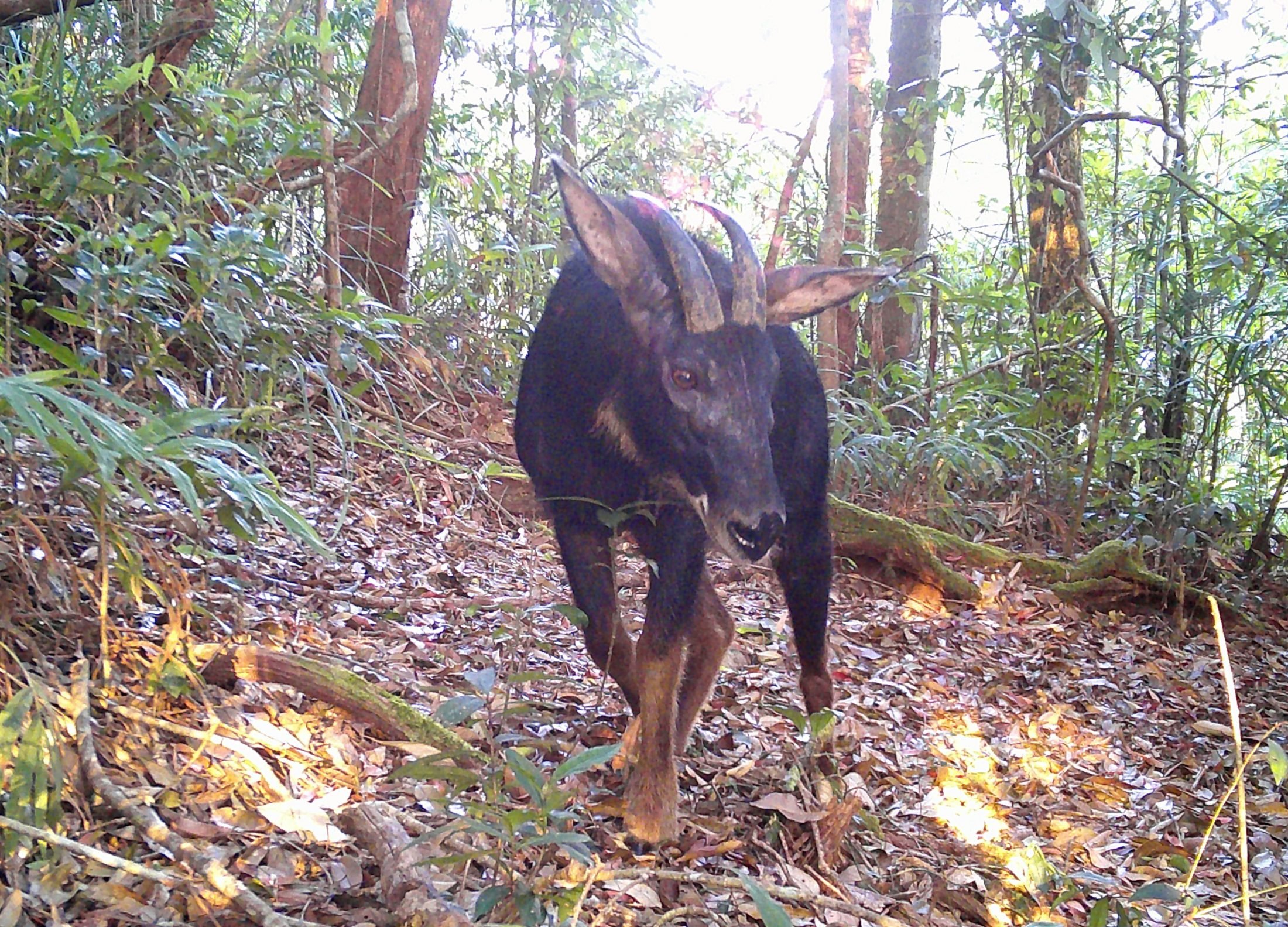 The shy and elusive serow is rarely encountered, but this individual was caught on camera. Credit: Fauna & Flora International

Seldom seen, but occasionally snapped by camera traps, the spotted linsang is a sleek, elegant carnivore, equally at home in trees or on the ground. With its ultra-long tail, elongated snout and dappled markings, it bears more than a passing resemblance to a stretch limo version of a leopard cat. 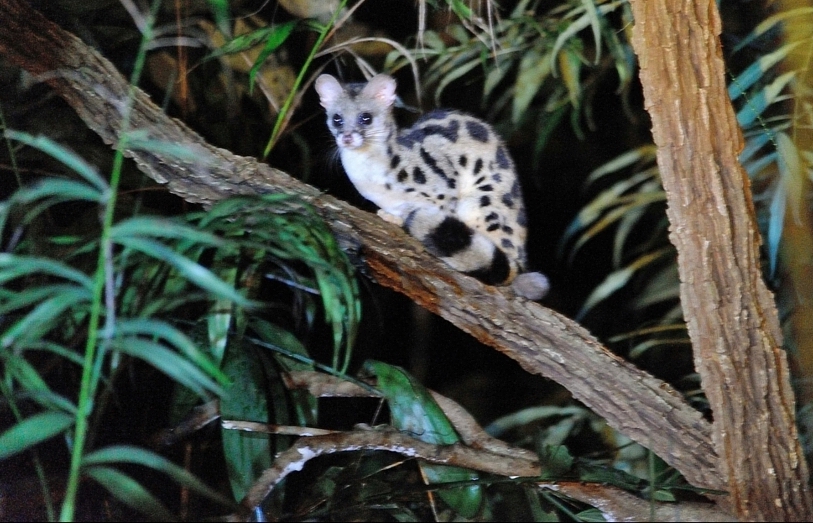 Habitat destruction and poaching pressure are the main threats to this acrobatic ape, and the Cardamoms are a key stronghold for this endangered primate. In common with many gibbon species, it is sexually dimorphic: males are mainly black, while females are ghostly grey. Both sexes have white hands and feet. 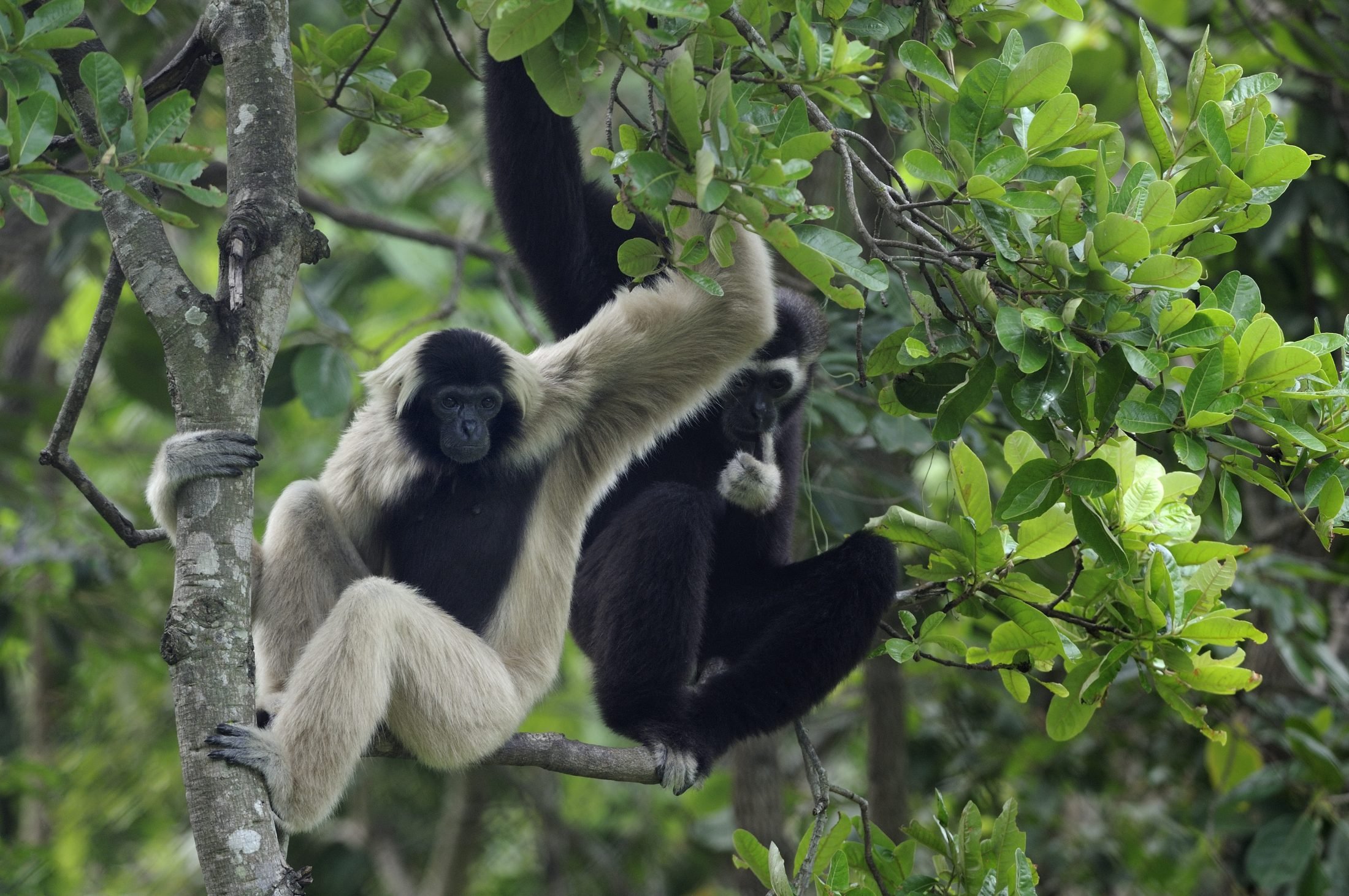 With its short legs, broad paws and counter-balancing tail, this enigmatic, arboreal wild cat is well-adapted to a life in the trees. The cloud-like markings on its coat help to break up its outline and merge with the forest backdrop. These powerful predators have the longest canine teeth of any feline. 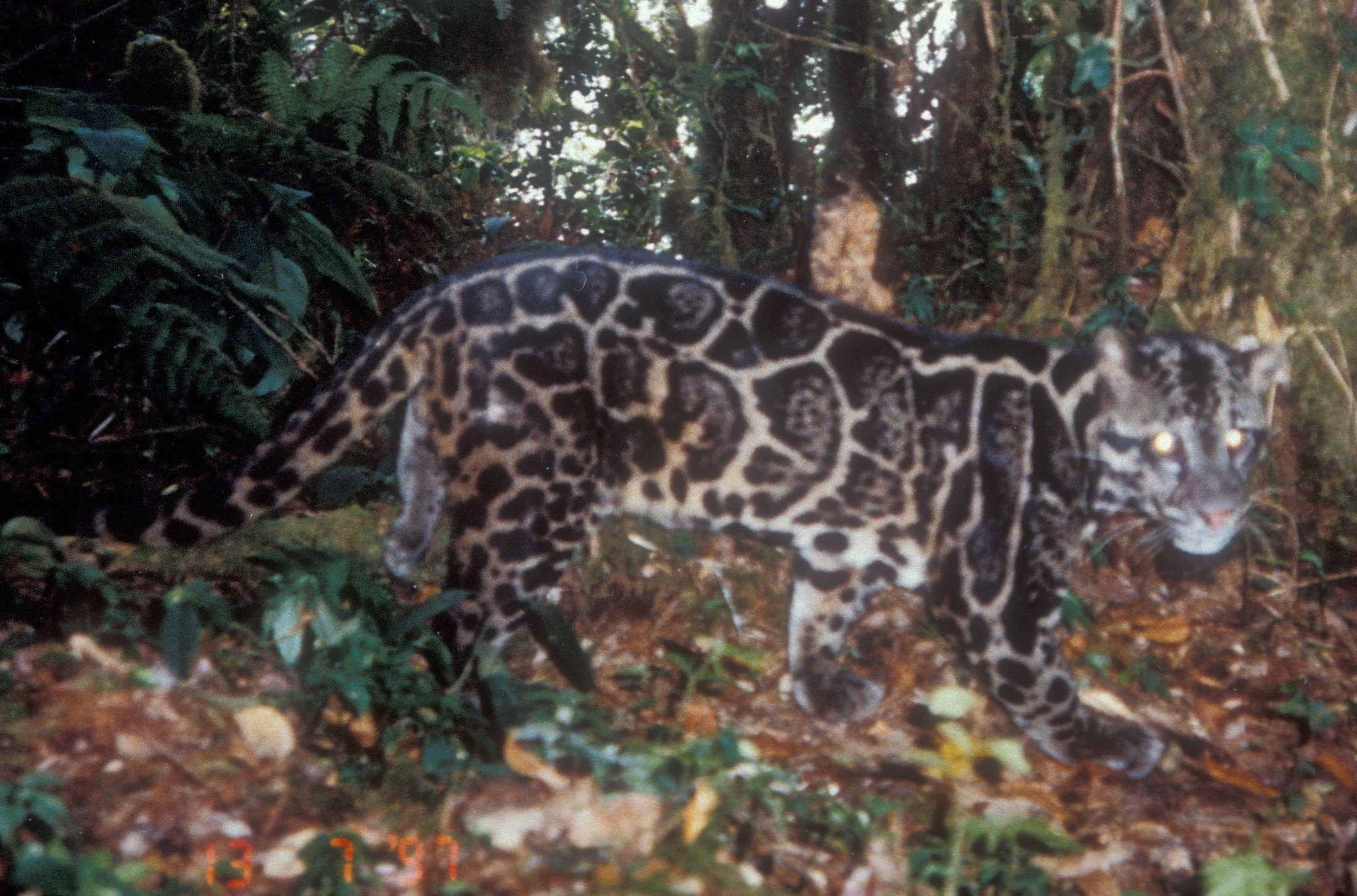 A clouded leopard on the prowl triggers a camera trap set deep in the forest. Credit: Jeremy Holden/Fauna & Flora International

Named for the distinctive orange-yellow patch on its chest, this is the world’s smallest bear. This omnivorous opportunist has poor eyesight and hearing, but can sniff out a meal from distance. Its claws are strong enough to rip open a concrete-hard termite mound or excavate a bees’ nest in a standing tree.

Sun bears are excellent climbers and considered to be the most arboreal of all bears. Credit: Fauna & Flora International

Asiatic black bears sport a paler chest crescent, hence the more popular ‘moon bear’ moniker. Their catholic diet ranges from fruit, nuts and honey to insects, small mammals and carrion. Moon bears are a frequent victim of the barbaric practice of bear bile farming, whereby bile is extracted from caged animals for use in traditional medicine. 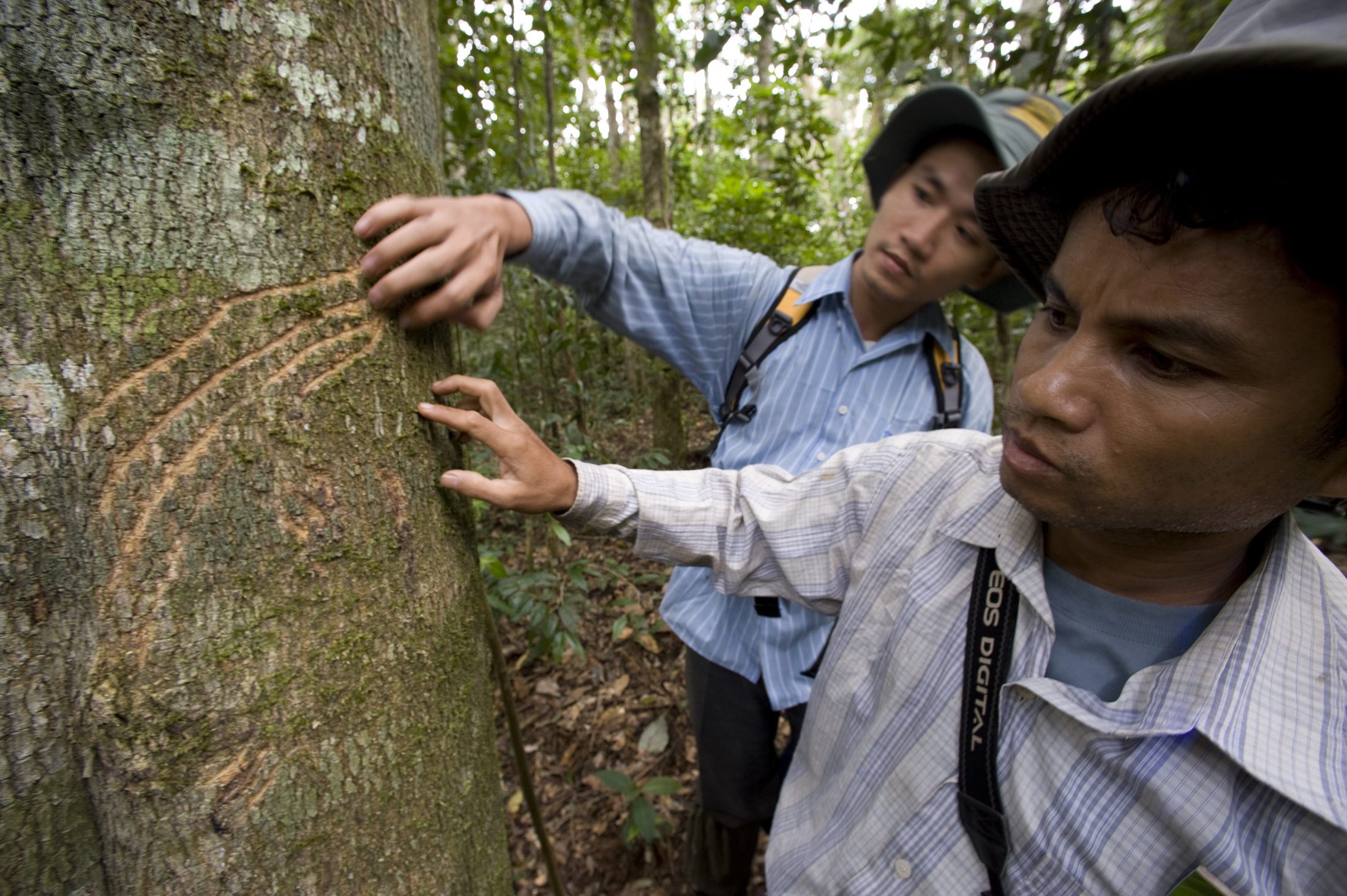 A bear’s presence is often revealed only by the distinctive deep claw marks made in a tree trunk. Credit: Jeremy Holden/Fauna & Flora International

Paradoxically, it was the long-term conflict – particularly the presence of Khmer Rouge soldiers and their deadly land mines – that had protected much of this wildlife, by effectively turning the forest into a no-go zone.

The return of political stability and increased security brought with it new threats: widespread logging, rampant poaching and other forms of encroachment. It was obvious that urgent action was needed to safeguard the future of this wonderful wilderness.

The support that FFI and partners have provided to impoverished communities, government officials, park rangers and a new generation of scientists during the intervening years has been instrumental in protecting this crucial haven of biodiversity.

Alarmingly, that success is now in serious danger of being undermined by a new crisis in the Cardamoms. Snares are an ever-present threat to forest wildlife, and the regular patrols conducted by community wardens throughout the past decade have been vital in ensuring their detection and removal. 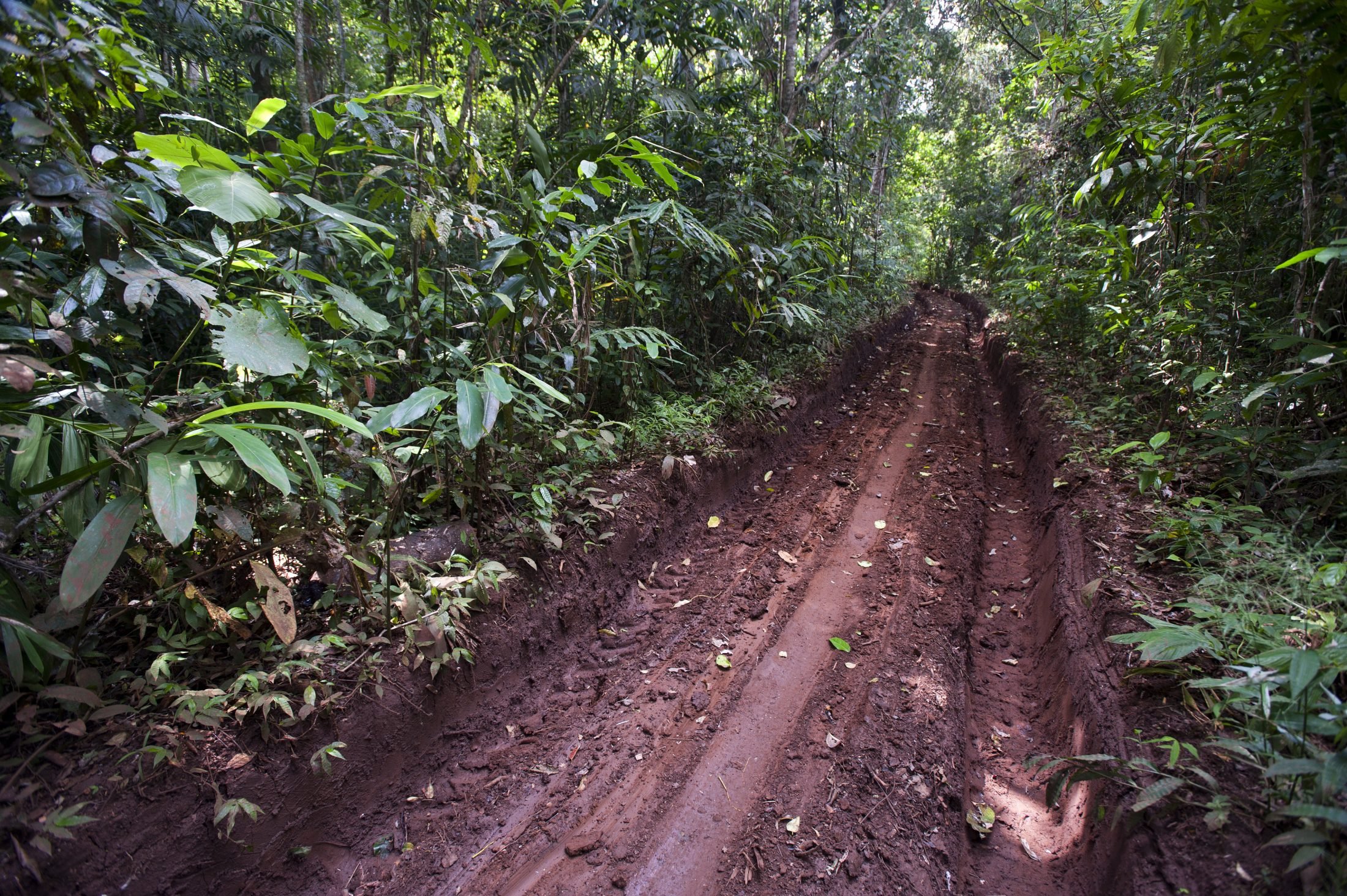 As new tracks make the deep forest more accessible, incursions into the Cardamoms to set snares are on the increase. Credit: Jeremy Holden/Fauna & Flora International

Unfortunately, the snare problem is currently in real danger of escalating, due to a shortfall in the funding that enables these patrol teams to operate at full capacity.

The majority of snares are laid to catch deer and wild pigs for bushmeat, but they kill and maim indiscriminately and are potentially lethal to predators, primates and even the mighty Asian elephant. The loss of the globally significant populations of iconic and threatened species that this forest harbours would be calamitous.

FFI has launched an emergency appeal to help ensure that we can keep boots on the ground in the most vulnerable areas of the Cardamoms, in order to safeguard the spectacular animals that still run wild in this remarkable refuge.

The dazzling diversity in one of Asia’s last great wilderness areas is under severe threat. Please help us to support community rangers and their tireless efforts to keep the Cardamom Mountains free from deadly snares.