Since my first days in the thick of it, I’ve looked upon the Sumatran rainforest as a living entity that chews you up and spits you out. That being the case, it’s pretty important to make sure your hard-earned field data is good quality.

In 2003, while based at the Durrell Institute of Conservation and Ecology (DICE) and partnering with Fauna & Flora International (FFI), I launched my first conservation project with the assistance of a Rufford Small Grant.

Known as Monitoring Harimau Sumatera, the grant was for a camera trapping project that still continues to this day to keep tabs on how tigers are doing in the forests of Kerinci Seblat National Park, west-central Sumatra.

This project then received a second Rufford Small Grant followed by a Rufford Booster Grant to help it achieve two main aims: – to estimate tiger population density across the national park and build the scientific capacity of young Indonesian conservationists. 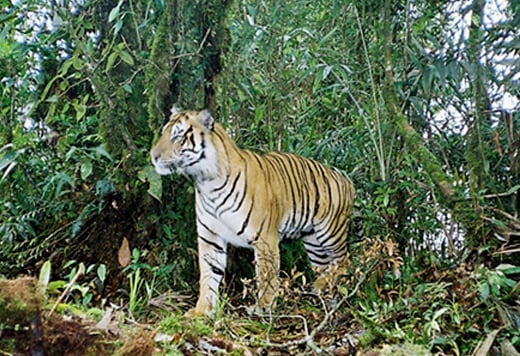 The tiger monitoring work was relatively easy, (except for the elephant chases and ground wasp attacks of which I still bear the scars as reminders!) as Kerinci has one of the healthiest tiger populations in Asia.

A core team, which eventually expanded to 12 Indonesian conservationists (including eight from the national park), systematically surveyed the forest with camera traps and, tigers aside, revealed rare species such as marbled cats and clouded leopards and those with intriguing names, like the moon rat (not actually a rat) and crested fireback.

The Rufford Grant was also used to develop a set of core training modules in sampling design, GIS and data analysis, and enabled a small bursary to be set up.

Over six years, 27 local university students and 17 volunteers were trained and then duly sent into the forest as ‘leech bait’ – sorry, I mean to collect important wildlife monitoring data.

Looking back – and to the future

Fast forward ten years and I’ve just had the great privilege of teaming up with Rufford once again. This time my involvement stemmed to running two mini-conferences and training workshops for 40 Indonesian Rufford grantees. 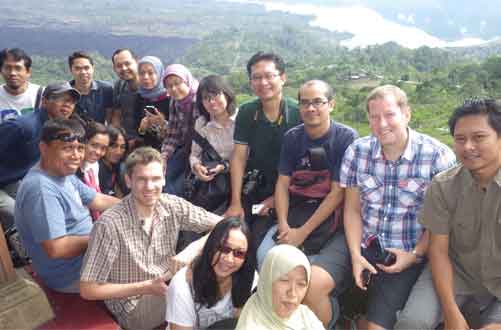 Recent Rufford recipients were given the opportunity to participate in the workshops and conferences. Credit: Fauna & Flora International

The spirit of adventure captured in their field stories was just as fascinating as the projects (and data) themselves.

A few of the memorable examples included the unassuming Umilalela and her team of budding herpetologists, who travelled for 12 hours on a rickety fishing boat to a tiny island off Borneo that is so remote you have to squint hard to see it on Google Earth. Their sole aim was to climb a mountain in search of rare frogs. However, the island’s mythology had predicted the group coming, but as head-hunters not scientists – a case of mistaken identity made worse when their bags for collecting frogs were misconstrued by the villagers as  skull receptacles! Thankfully herpetological science eventually prevailed, after a tense week’s wait in the village, and Umilalela ultimately recorded a number of new species.

Cahyo Rahmadi’s pioneering spirit took him inside unexplored and primitive karst mountains in Java. His exploits were summed up succinctly by one workshop participant as, “humans came from the plains, humans moved into caves, now this guy has gone back into the caves to look for spiders!”

Partcipant Muhammad Iqbal surveyed the entire coastline of east Sumatra (over 1,000 km) to map the distribution of Endangered milky stork, while another – Sutomo – was experimentally trying to unravel how the complex interactions between invasive acacia, wild buffalo, and fire  is threatening a savannah ecosystem in Java.

All in all, it was a great conference that reinforced my opinion of Rufford Small Grant recipients – their strong will and determination will always ensure that they have a positive conservation impact. However, the Rufford Foundation is instrumental in providing them with the support they need to achieve their goals, quickly.

With so many urgent threats to biodiversity around the world, this is the beauty of a quick-thinking donor organisation that believes in the potential of young conservationists and invests in their spirit of adventure.

We are very grateful to REKAM Nusantara – Indonesia Nature Film Society who have made a short video featuring highlights of the conference. You can watch it below.