Conservation through dedication: an uphill battle…

Trekking for hours, every muscle in my legs scream and threaten to collapse. This hill is so steep that more often than not I find myself climbing rather than walking. My pack pulls at me with such force that I fear I may tumble backwards, but I press on following the guide in front of me. Every so often he looks back and asks, “you ok?” I manage a smile and reply, “always ok,” giving him a thumbs up. 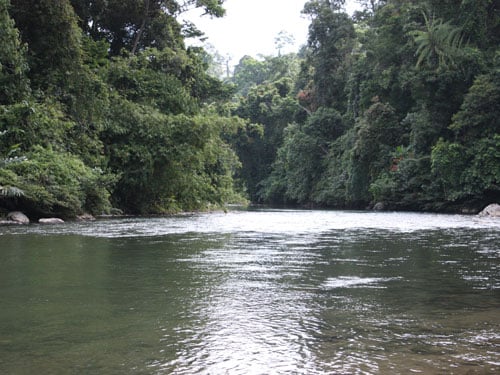 Up we climb. The air is thick and humid and sweating doesn’t begin to cover the amount of water pouring out of my skin. A long skinny finger of spikes dangles down and grabs hold of my eyelid, I utter a swearword as I unhook myself. My guide looks back and giggles. I try to watch and avoid them, but figure it’s safer to watch where I put my feet. The jungle floor is covered with 6inches of slippery leaf litter atop sinking mud. Add to that the numerous vines grabbing at my feet and rotten logs that crumble when you so much as look them…yes a quick and painful trip to the bottom if I fall, so a few spiky scratches to the face are a welcome alternative I think.

At last, the top of the hill. The fifth hill so far this morning with many more like it before the day is out, but I try not to think about that. I sink to the ground, grab my water bottle and try to will my limbs to stop trembling.

No sooner had I sat than a searing pain from my backside has me jumping to my feet again. I grab at the site only to find an inch long red headed ant looking a tad cranky. My guide, and the rest of his team, looks up and starts rolling around laughing. Pointing he says, “like Australian Fire ant!” and continues to giggle. Brilliant I think to myself, but can’t help smiling at the four of them rolling around the jungle floor in the middle of Sumatra’s thickest forest giggling at the girl who just had her bum bitten by an ant. 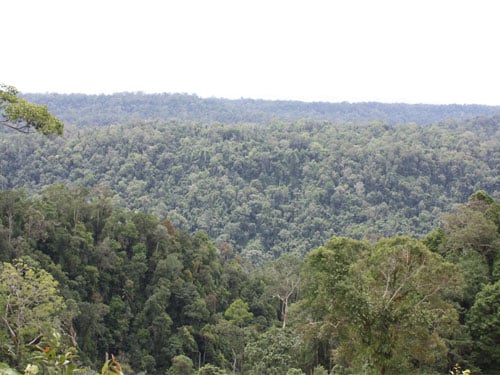 As I look at my teammates one word comes to mind, dedication. Four days in the jungle and I’m a sweaty, scratched up mess whereas these guys take a seat and light a cigarette! Laughing and joking with each other like brothers, it’s clear how close they are. But then, they have to be. My guide looks at me and says, “in jungle, have to be happy…no happy, go crazy” with a serious look on his face.

They tell me stories of being lost in the jungle for days on end with no food or water save for what they found around them or of waking to find a tiger or bear peering in at their campsite. Tales of being sick for days on end, no medical aid and with only each other to help them get well enough to trek out again. Scars up one of their legs tell the story of how not once, but several times they’ve been beaten close to death by illegal poachers and loggers found in the forest. 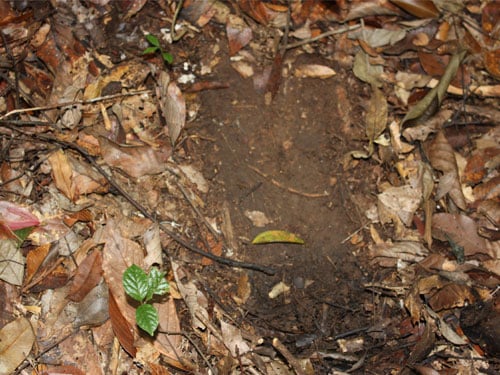 I had come to Sumatra Indonesia to see firsthand what the tiger patrol units of Kerinci Seblat National Park had to go through in order to protect tigers, animals that share its habitat and the magnificent jungle that sustains them all, and what I found was heart wrenching.

In total my four day trek found ten different poaching sites over a 25km area, an illegally logged site complete with new road into the jungle that, four months prior had been pristine forest, as well as an abundance of human encroachment evidence such as freshly cut tracks and litter, soiling what should be an untouched human-free world.

The patrol units cover the entire national park on foot, trek after trek with the whole area taking around one year to cover with the minimal teams they have. An upward battle but still they persevere.

They have jurisdiction only within the forest to arrest poachers and loggers, and at the risk of being beaten or killed themselves. They carry no guns, handcuffs and have no phone reception and yet, they continue their task with a smile. Yes definitely dedication. 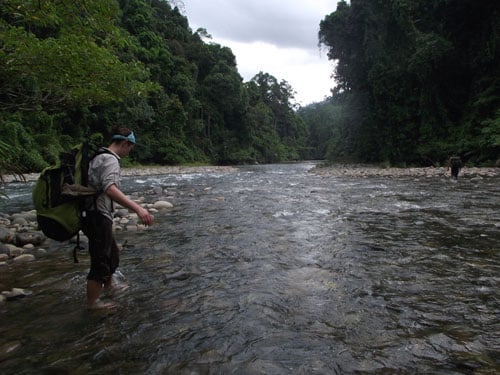 In the two weeks prior to my visit they had four incidents of human-tiger conflict and one elephant conflict, meaning their job is not limited to the forest. They protect local villages and provide a solution for rogue tigers and other wildlife that would otherwise mean death for those animals.

Poaching, illegal logging, pollution, palm oil industry are just some of the problems Indonesia face, however when I asked one of my teammates what the biggest problem was, he looked at me sadly and said “number one problem Indonesia…corruption.”

Much investigatory work is done by the teams in surrounding villages to catch would be poachers however the level of corruption can often affect the outcome of their efforts.

“More eyes in the jungle,” one of the boys had said when I asked what might help their work and the others all nodded in agreement. So true. How can these guys possibly cover the vast area they protect with such limited resources? The tiger programme in Sumatra is run by Fauna & Flora International, with help from its donors, but it’s not enough. With less than 400 Sumatran tigers left, man power needs to be tripled along with better equipment, cameras, GPS etc if there’s to be any hope of saving this fragile world.

I thank these guys dearly as I leave for their hard work and dedication, and can only hope through public awareness and support that these jungle warriors get the help they need to continue their work which without a doubt, will mean the survival or extinction of the Sumatran tiger.