Angelica is a Communications Officer at Fauna & Flora International, based in the US. She has a master's degree in International Media and over a decade of experience working in non-profit administration and strategic communication.

Dr Herbert Raffaele dedicated the last 30 years to wildlife conservation through the U.S. Fish & Wildlife Service (USFWS), an agency of the Department of the Interior. In a recent interview, Raffaele reflected on how conservation programmes can have a greater impact on illegal wildlife trade through demand reduction.

How did the conservation initiatives you worked on intersect with the issue of illegal wildlife trade?

To place my comments in context, when I was with USFWS there were other divisions that dealt with wildlife trade primarily through CITES and the Endangered Species Act. In the Division of International Conservation, which I managed, we dealt with trade more indirectly. But we still had a strong connection to trade in that we worked with the animals and the countries involved to help address the threats to wildlife posed by the illegal trade. 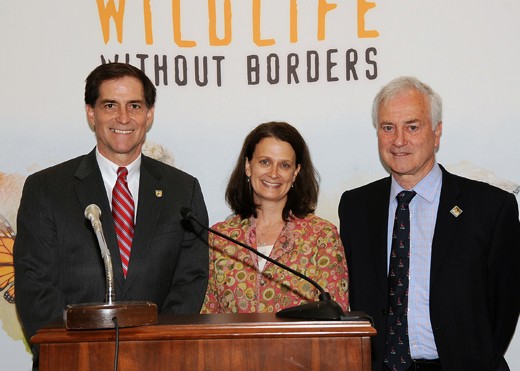 Dr Herbert Raffaele (right), during his tenure as Chief of the Division of International Conservation at USFWS, pictured with the Director of USFWS, Dan Ashe (left) and Katie Frohardt, Executive Director at FFI US. Credit: USFWS.

As our programmes grew, I started to realise we were missing the boat on some key needs. We had great on-the-ground projects for African elephants and rhinos, for instance, yet their numbers were still declining and the value of their tusks and horns kept going up. We were spending roughly US$2 million dollars per year on African elephant conservation alone, and close to that on the Asian elephant, rhino and tiger programmes. We were addressing the threats to animals on the ground, but we weren’t adequately addressing the root causes.

How did you start to address the way the conservation programme looked at illegal wildlife trade?

If you’re a specialist who has worked with elephants your whole career, when you see elephants dying, the first thing you want to do is stop the killing. So, there is a powerful tendency to address the problem by funding anti-poaching projects. But, despite the obvious importance of anti-poaching efforts, this does not address the fundamental cause of the killing – which is consumer demand in Asia. It is this demand that is driving the value of elephant ivory and rhino horn up, and this means the problem gets worse. This was very clear to me, yet it wasn’t getting the attention it deserved.

One of the bright spots was an organisation we funded at the USFWS that ran behaviour change towards wildlife campaigns in China. They went on to work on reducing China’s consumption of shark fins. Today the Chinese government has banned shark fin soup at events.

What does it mean to address “demand reduction”?

There appears to be a reasonable body of information on who wants ivory. Ivory isn’t used in any significant way in Africa locally; it’s exported. So where is it going?

Apparently, the growing middle class in Asia (especially China) has adopted ivory as a status symbol for wealth and prosperity. That middle class has been growing rapidly and so demand for ivory has grown too. 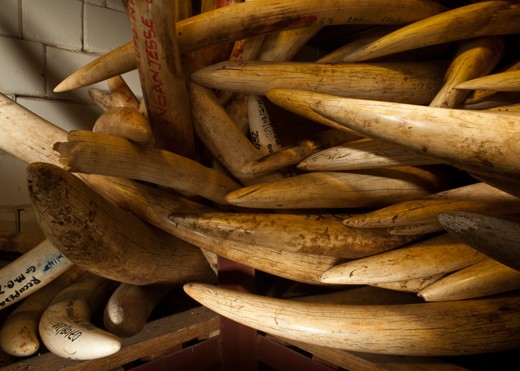 Stockpile of ivory seized by authorities in Mozambique. Credit: J A Bruson/FFI.

Studies need to be done to better understand the market, exactly why people are buying it, for what purpose, and most importantly, how the attitudes of ivory purchasers might be effectively changed.

A similar situation occurred in the United States with the use of furs and feathers in the hat and garment industries. We don’t see much fur or feathers in clothing any more because there was an effective campaign to change public attitudes on this issue in the US.

That’s what has to be done for elephants and their ivory, and for other species threated by illegal trade.

Were there programmes in your tenure that proved more successful?

In my time with USFWS, one of our most substantive and effective accomplishments on this front was to provide funding to a few extraordinary initiatives to address demand reduction. The big challenge is to move beyond the effective, but smaller-scale, limited-focus projects, towards a comprehensive, broad-spectrum campaign. Good things are being done regarding demand reduction—but they need to be scaled up dramatically and numerous missing components of a broad-spectrum campaign need to be added to the mix.

The problem we’re talking about now has nothing to do with the experts or the animals themselves. Our wildlife experts are great in their field. However, to address demand reduction we need experts with completely different skill sets, like communications and marketing. Such a refocusing is challenging, but essential.

Are you hopeful about efforts to combat illegal wildlife trade in the near future?

I have tremendous hope because demand reduction has only been minimally addressed. The good news is there is a potential solution to this crisis that hasn’t been adequately developed and invested in yet.

As Amy Salzman, my fellow board member for FFI US, pointed out in her powerful article in the August 2015 issue of Fauna & Flora magazine, we need a balanced approach to the poaching crisis.

FFI has a track record as a long-standing NGO that has placed an emphasis on building social connections in addition to direct wildlife conservation. It has substantial experience of working with communities and local groups and is sensitive to the human aspect of conservation. That’s an important starting point. 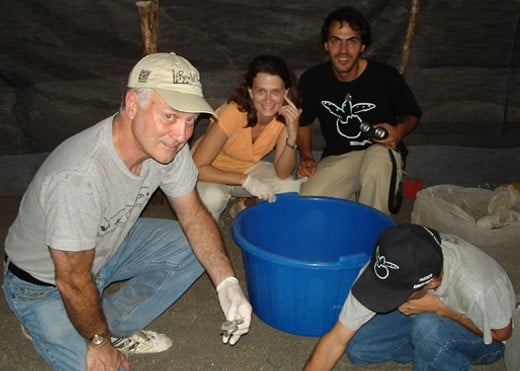 On a project visit to Nicaragua – a flagship initiative for FFI – I saw first-hand how the project design and staff recognise that conservation is a human-centred discipline. It is not just about protecting nesting beaches or raising turtle hatchlings and releasing them into the wild. It is also about addressing attitude and behaviour change that reduces demand for consuming turtle eggs.

This kind of integrated work gives me confidence that FFI will continue to make an important contribution to the illegal wildlife trade challenge.

Angelica is a Communications Officer at Fauna & Flora International, based in the US. She has a master's degree in International Media and over a decade of experience working in non-profit administration and strategic communication.