Communities are the essential conservation ingredient

The Pink Parlour of Puruk Cahu is the head quarters of Fauna & Flora International’s (FFI) Murung Raya Sustainable Development and Conservation project. With its lurid pink walls trimmed in lime green, matching pink shower curtain window coverings and elaborate wooden mouldings, the office blends in perfectly in this Indonesian street-scape with shops, hotels and houses all painted in hues that elsewhere might be considered ‘so last season’. Working from Melbourne, I had visited Jakarta before but had never visited Godwin Limberg, Programme Manager extraordinaire, in his natural habitat – the forests of Kalimantan. My travelling companion Ally Catterick, FFI’s Communications Manager, and I had flown from Jakarta to Balikpapan, boarded a single prop 12 seater to Muara Teweh and then by car two hours to Puruk Cahu. From Melbourne that was two full days. We hadn’t expected the Pink Parlour. 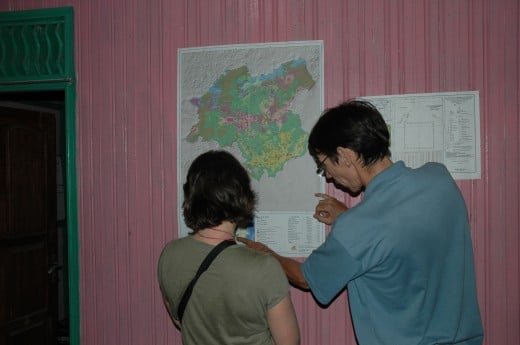 The twitcher gets twitchy

Throw another shrimp on… the tree?

For over two years Godwin has worked for FFI on this project in Central Kalimantan, an area often referred to as “The Heart of Borneo”. This magnificent landscape of high value conservation forest and shrub lands is home to threatened species such as the pangolin, civet cat, clouded leopard, gibbons, Argus pheasant, proboscis monkey and a variety of bird species. Largely unexplored by biologists, expeditions are now turning up new species and the race is on to find and describe a much-talked about arboreal shrimp (yes, an arboreal shrimp), believed to have climbed up the wet moss-covered trees and stayed for the view! These varying habitats are threatened by development, both industrial and urban, such as mining and timber practices.

The story so far

The Murung Raya project consists of several elements, including assisting the government to revise the spatial plan for the area, preparing a Strategic Environmental Assessment and engaging with all industry sectors active in the region: mining, timber, oil palm and tourism. Godwin has been kept busy engaging the mining industry in best practice mining and revising the provisional mining regulations; engaging the timber industry in moving to sustainable harvesting practices and protecting watersheds; writing the provincial regulations requiring new palm oil concessions to undertake a High Conservation Value Assessment; and discussing eco-tourism opportunities with government. He is also overseeing our relationship with the Borneo Orangutan Survival Foundation as it proceeds with plans to reintroduce orang-utans to secure forest areas in Murung Raya later in the year. And these are only two of five project elements.

We met Godwin and Ratu at the FFI office for a “kopi” (sweet Indonesian coffee) and then piled in to the ute (a pick-up truck to those of you not fully versed in Australian lingo) taking us to meet local villagers involved in a community conservation effort to protect their village forest at Danau Usung.

Skills training in the community

Another of the components of this project is the community conservation leadership programme seeing 20 people from local villages mentored in conservation and forest management skills. We visited some villagers who told us how the training has assisted them and their plans to have their village forest decreed as hutan desa, giving them management rights over local watershed forest and its threatened biodiversity. We were happy to say goodbye as we had been invited back the next morning to listen to the calling of Bornean white-bearded gibbons, another first for me!

We headed back through Puruk Cahu, up north to Mount Bondang. This was a very bumpy two hour drive that even Cadel Evans would struggle to endure.  The scenery almost made up for the bumps, as we travelled through picket fenced villages and over crystal clear streams and dense forested areas. Stopping along the way to drop off a local who had hitched a ride with her crowbar, we were invited into the house of the local mattress sales queen to sample the delicacy of rice wine – a strange taste both fruity and dry. Godwin chose to chow down on the betel nut (nut, leaf and lime paste) and we all enjoyed his red-mouthed grin as a result. This village has no electricity but hopes a micro-hydro facility will change that. Godwin is keen they seek management of the water catchment to protect the forest providing them with a tangible environmental service: water to keep the turbine moving.

Mount Bondang rises magnificently above the forest but we only get within 5km as the road eventually peters out. We marvel at its beauty and that out there somewhere lives the mysterious arboreal shrimp and who knows what other secretive species.

Seeing these awesome sights and meeting these wonderful people makes my task more pressing and compelling; finding donor funding to continue this important work, helping the community to conserve the forests and their biodiversity, so they can support the sustainable livelihoods of the people of Murung Raya.