A deer with antlers and a shiny nose caught on camera in a remote region of Cambodia shortly before Christmas time? Have Santa and his sleigh been speeding across Southeast Asia to make up for lost time? Well, not exactly. Fortunately, the animal that triggered the flashgun was no reindeer, so Santa’s driving record remains unblemished.

The ruminant that gave rise to the rumours turned out to be an even rarer beast – red-listed rather than red-nosed. If you’ve never seen a photo of a large-antlered muntjac before, you are not alone. This elusive and critically endangered deer was unknown to science until 1994.

As its name suggests, it generally has slightly bulkier headgear than the more common and far more widely distributed Chinese muntjac, which is native to Asia but has become a familiar sight as an invasive species throughout much of Europe, including the UK. Both species are characterised by a guttural alarm call reminiscent of a barking dog, but the large-antlered muntjac has a considerably shorter tail and can attain much larger size – hence the alternative name, giant muntjac – while its extreme rarity and limited range contrast starkly with the status and distribution of its upstart cousin. 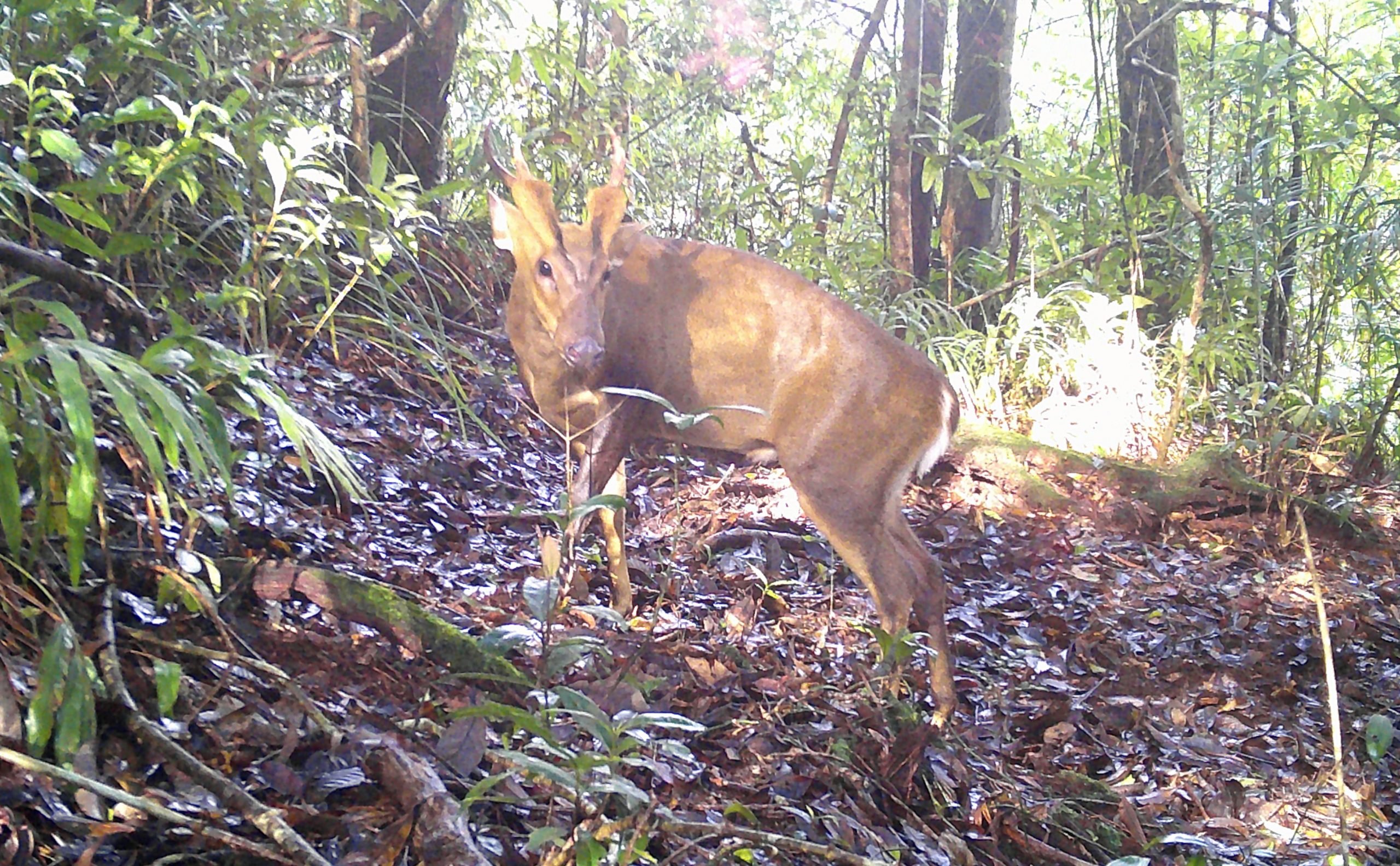 Mainly confined to remote forest refuges in the Annamite mountain range that straddles Laos and Vietnam, the large-antlered muntjac also occurs in Cambodia, but until this year had not been recorded from Virachey National Park, a relatively unexplored wilderness in the north-east corner of the country. However, its presence in Virachey has now been revealed by camera-trap surveys, which are helping to unearth the secrets of this precious park and its threatened wildlife.

And that’s not all. The large-antlered muntjac pictures recovered from the camera traps set by  Fauna & Flora International (FFI) included not only several images of adult males and females, but also numerous photos featuring a baby deer – the first time a fawn of this species has been captured on camera in Cambodia. 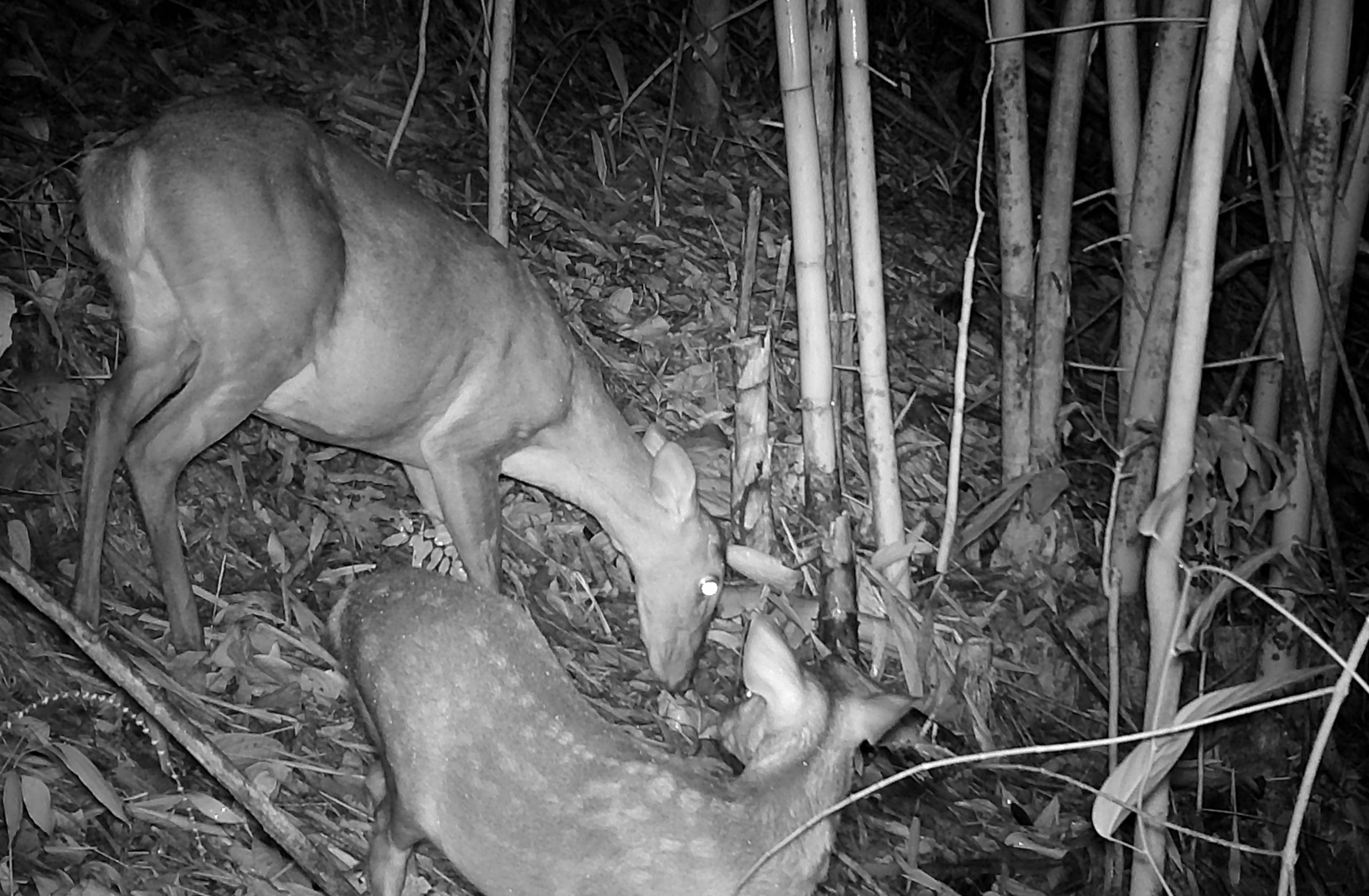 Opening the image files must have felt like the conservation equivalent of unwrapping a huge pile of presents. Hot on the hooves of the large-antlered muntjac revelations came other spectacular and notable finds, including the critically endangered Sunda pangolin and the endangered dhole – Asia’s very own wild dog –  as well as rarities such as moon bear, sun bear and the goat-like serow.

Any disappointment at not catching a tiger on camera was quickly dispelled by the shots of several other secretive and elusive felines including clouded leopard, marbled cat and Asian golden cat. And frankly, who needs a partridge in a pear tree when you can feast your eyes on the eye-spots of a peacock-pheasant or marvel at the electric-blue beauty of a Siamese fireback? 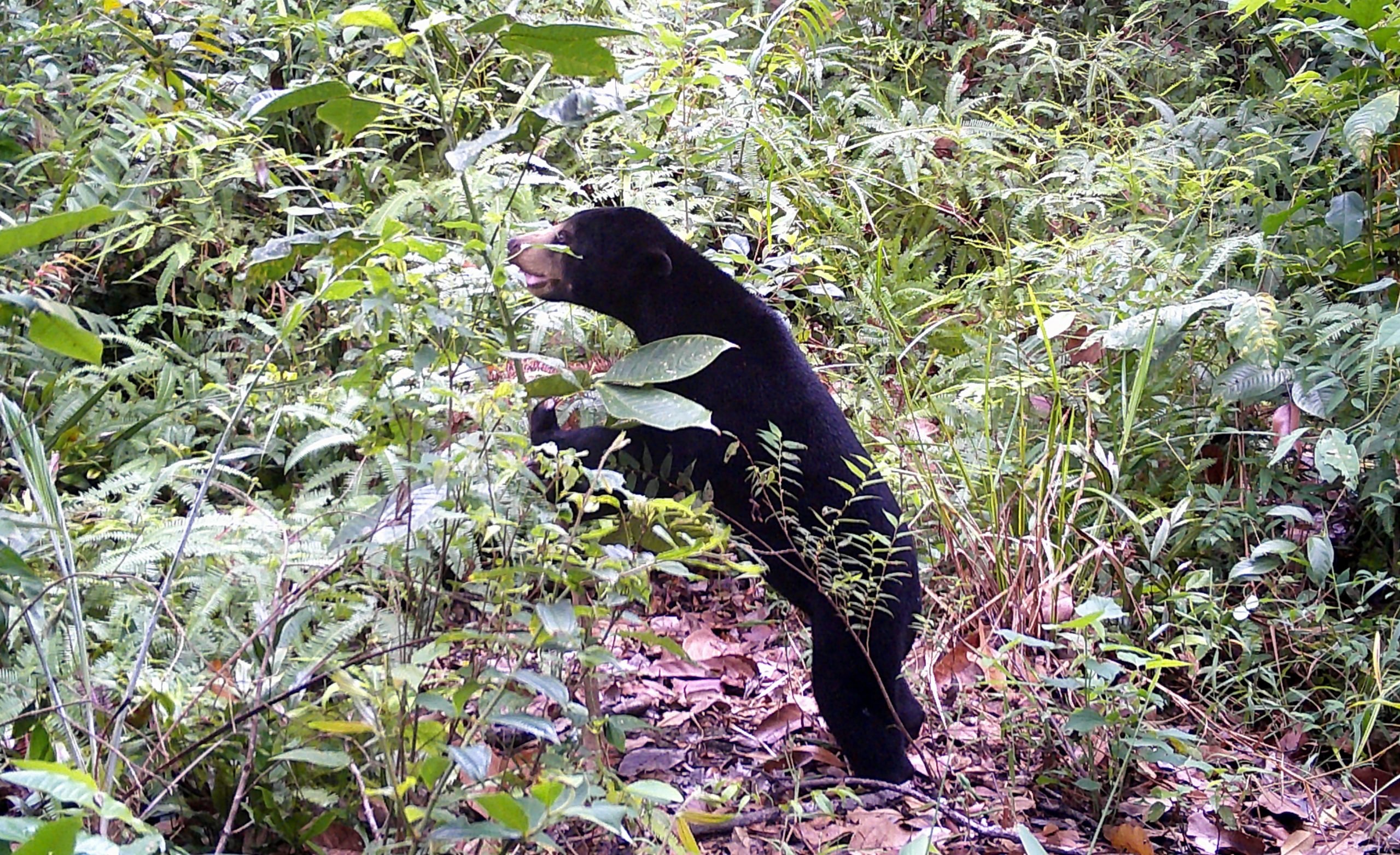 The large-antlered muntjac photos – not to mention the mugshots of myriad other threatened species – demonstrates the global importance of the Virachey National Park and its rich tapestry of forests, which provide sanctuary for so much incredible wildlife, including the largest and globally most significant population of the northern yellow-cheeked crested gibbon, a primate on the brink of extinction.

FFI has been working closely with Cambodia’s Ministry of Environment to secure greater protection for this vital haven of biodiversity, which has received scant conservation attention despite being subject to increasing encroachment and threatened by illegal timber extraction. The park clearly has a vital role to play not only in the survival of species such as the large-antlered muntjac and northern yellow-cheeked crested gibbon, but also as an important carbon sink and source of community livelihoods. 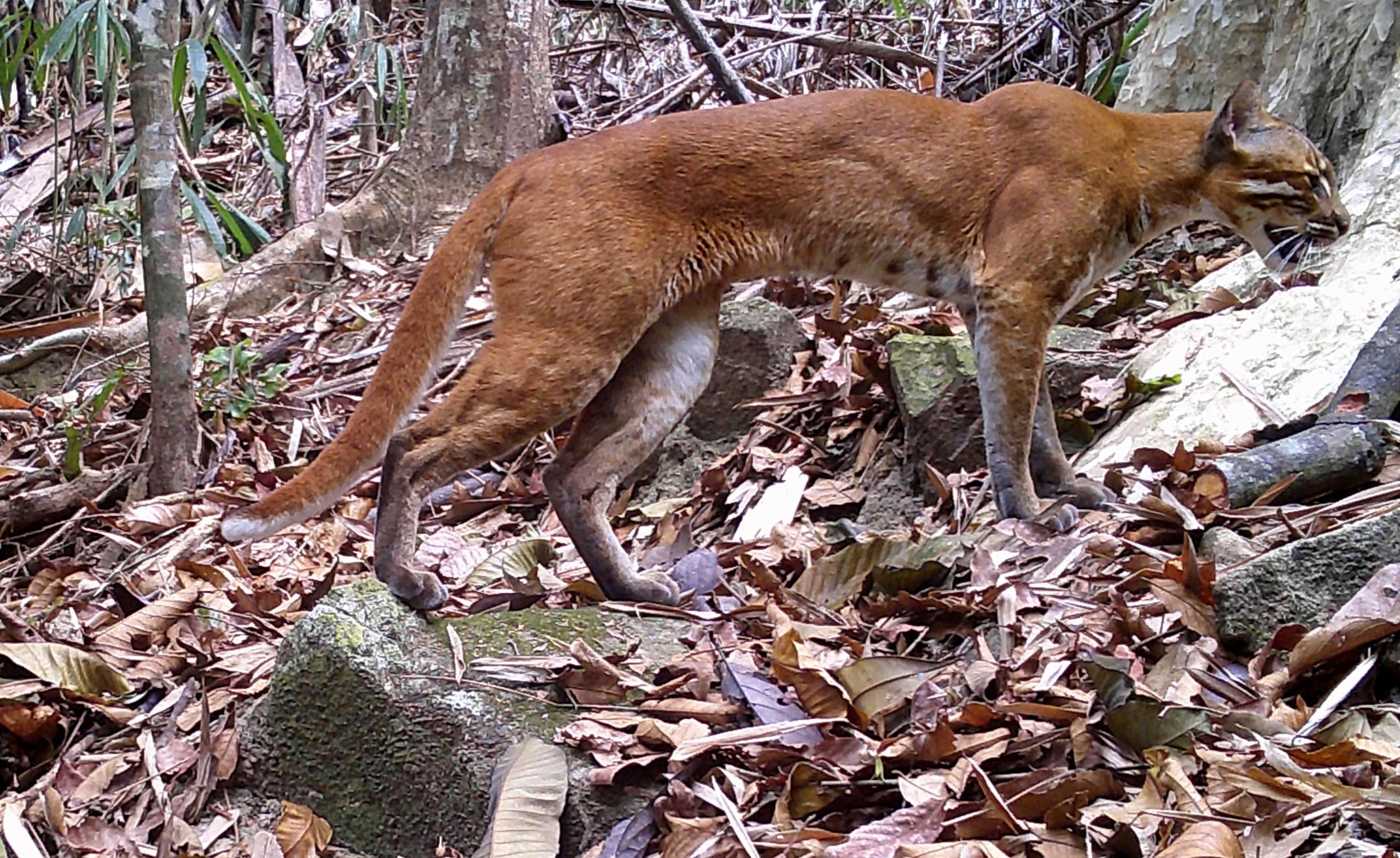 Gold, feline sense and miaow. A three-in-one Christmas gift in the shape of the elusive Asian golden cat. Credit: FFI

Virachey National Park is the gift that keeps on giving, but we are in danger of losing a biodiversity hotspot whose value we are only just beginning to appreciate. Pablo Sinovas, Flagship Species Manager for Cambodia, is acutely aware of the urgency of safeguarding the national park from the mounting threats to its integrity: “With forest areas shrinking across the region, now is the time to prioritise protection of remaining gems like Virachey National Park. The Cambodia-Lao PDR-Vietnam transboundary landscape it is part of not only offers one of Southeast Asia’s last refuges to a host of threatened species, but is also of critical importance for the generation of nature-based solutions to the climate crisis.”

Jeremy Parker, Country Director for FFI’s Cambodia programme, also emphasised the importance of the park and the magnitude of the mission to map the biodiversity it harbours: “For the Cambodian people, Virachey holds a very special significance as a sort of ‘last frontier’ – an area that had previously not been fully explored and even now likely retains much to be discovered.” 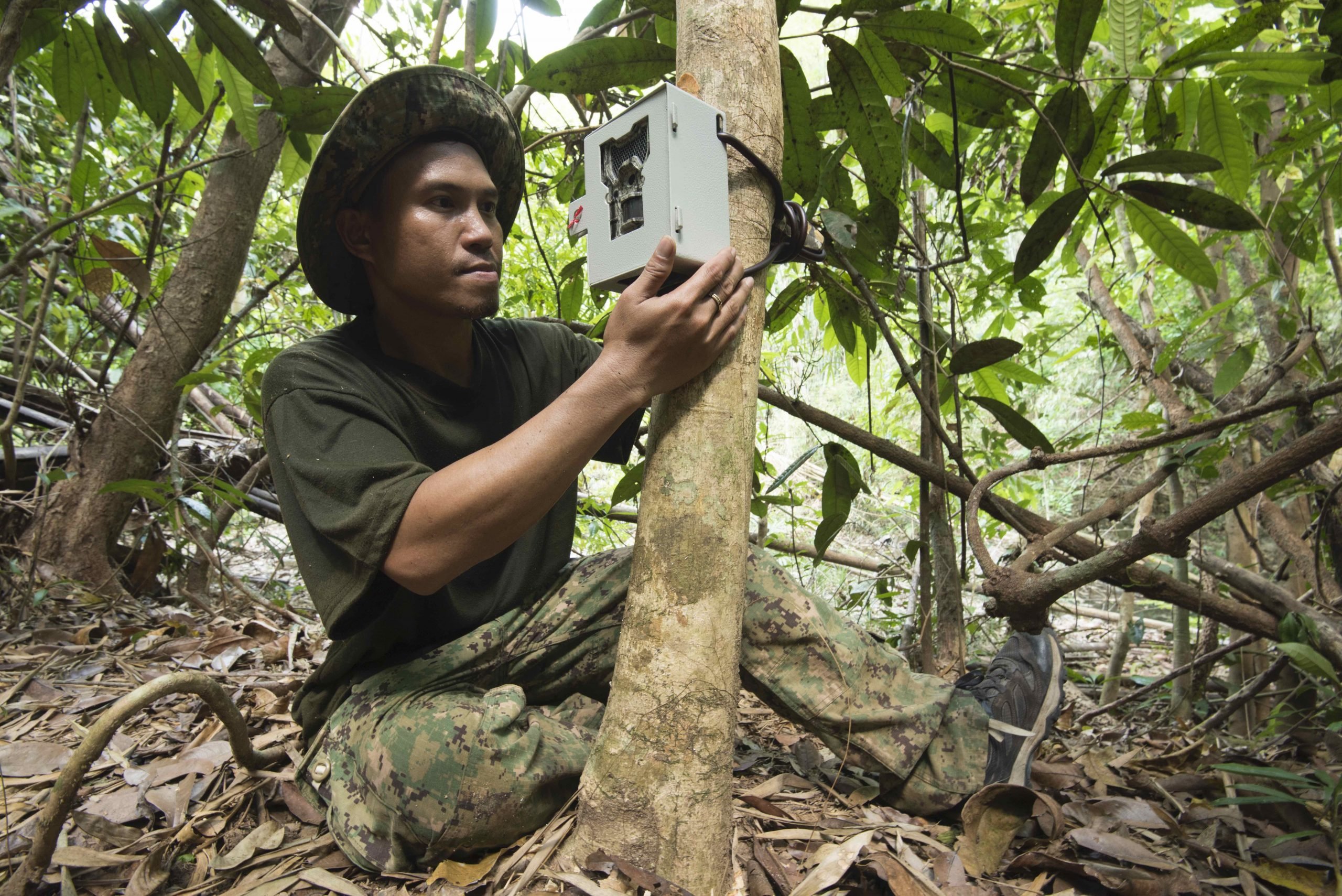 “Our team deployed over 80 cameras within seven separate grids to provide as much coverage of the park as possible, encompassing many different altitudes and habitat types. This led them through tropical evergreen forest, bamboo landscapes, grasslands, across rivers and streams and up to mountain peaks.

“FFI’s expedition this year was the first of its type in over a decade, and certainly was the most wide-ranging biodiversity survey of Virachey ever conducted. We certainly are not having a Blue Christmas sorting through the camera trap images, and are very much looking forward to continuing our work in the park in the new year, with follow-up surveys and further studies of the northern yellow-cheeked crested gibbon, the large-antlered muntjac and other critically endangered species.

“We will also begin supporting indigenous communities through livelihood initiatives that reduce their dependence on hunting and fishing within the park’s boundaries, and help them strengthen their own management of park resources through Community Protected Areas.”