Chimp rescue in Liberia – Safeguarding orphans and saving a species

There are few more distressing sights than a wild animal on a chain. When that animal shares more than 98% of its DNA with us, such treatment somehow feels even more barbaric.

Baby Chimp Rescue, the three-part series currently airing on BBC 2, documents the day-to-day travails of Jenny and Jimmy Desmond, the dynamic duo who co-founded Liberia Chimpanzee Rescue and Protection (LCRP), the country’s first and only sanctuary for orphaned chimpanzees.

Halfway through the first episode, viewers witness the rescue of a three-year-old female chimp that Jenny and the authorities find chained by the neck to a concrete slab on the outskirts of a village. It’s a harrowing scene. Her skin is hairless and calloused where the links of the tight, heavy-duty chain have taken their toll. The expression on her face speaks volumes. We learn that she was captured when her mother was killed for bushmeat. Apparently, most pet chimps tend to suffer the same fate; once the cuddly infants grow into unruly teenagers, their ‘owners’ find them too hard to control.

This is tragic enough from a welfare perspective, but from a conservation viewpoint it’s nothing short of disastrous. Every chimp rescue, however uplifting in its own right, is a reminder that the wild population is being relentlessly depleted. Western chimpanzees are among the world’s most threatened primates. Liberia is one of their last remaining strongholds, but even here their numbers have plummeted.

Chimpanzees are officially protected throughout their range, but poaching is rife, particularly around workers’ camps, where bushmeat is the main source of protein and wildlife can be killed with virtual impunity. Add to this the live trade in infant chimps whose parents have been butchered to supply the lucrative commercial bushmeat trade, the spread of infectious diseases such as Ebola (exacerbated by human encroachment on their habitat), plus fragmentation of their forest homes due to agricultural expansion, logging, road building and mining, and you are left with a perfect storm of threats to their long-term survival. 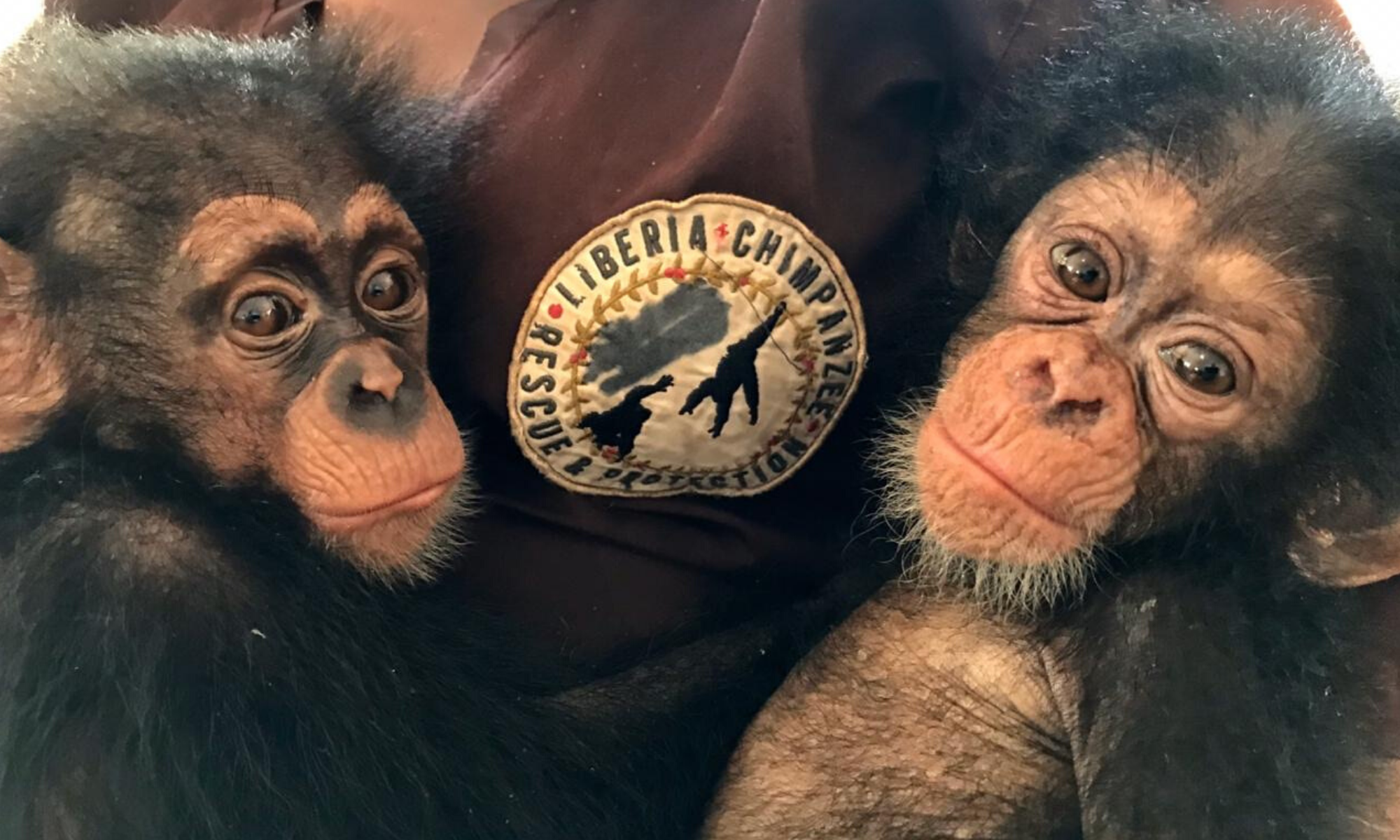 Fauna & Flora International (FFI) has been working with partners in Liberia and more widely in West Africa – where we are supporting a national and regional chimpanzee action plan – in order to safeguard these beleaguered great apes and their shrinking forest habitat.

LCRP is one of FFI’s partners in an ambitious new project supported by the UK government’s Illegal Wildlife Trade (IWT) Challenge Fund in Liberia. The first of its kind, this project aims to develop national capacity to respond to illegal wildlife trade in country and encourage cross-border collaboration with Liberia’s West African neighbours.

Supporting the development of a Liberian National Strategy to tackle illegal trade will be a crucial facet of this work. Specific priorities include improving national and transboundary coordination, strengthening intelligence gathering and enforcement capacity, increasing public awareness and developing robust data management systems.

As part of its holistic approach, LCRP has helped Liberia’s Forestry Development Authority to set up a Confiscation Unit and Wildlife Crime Task Force – also the first of their kind. This unit receives support in the shape of training, mentoring and provision of equipment and other resources. FFI is working with LCRP and partners to establish a mobile taskforce focused on wildlife seizures (including live animals) and public engagement throughout Liberia. 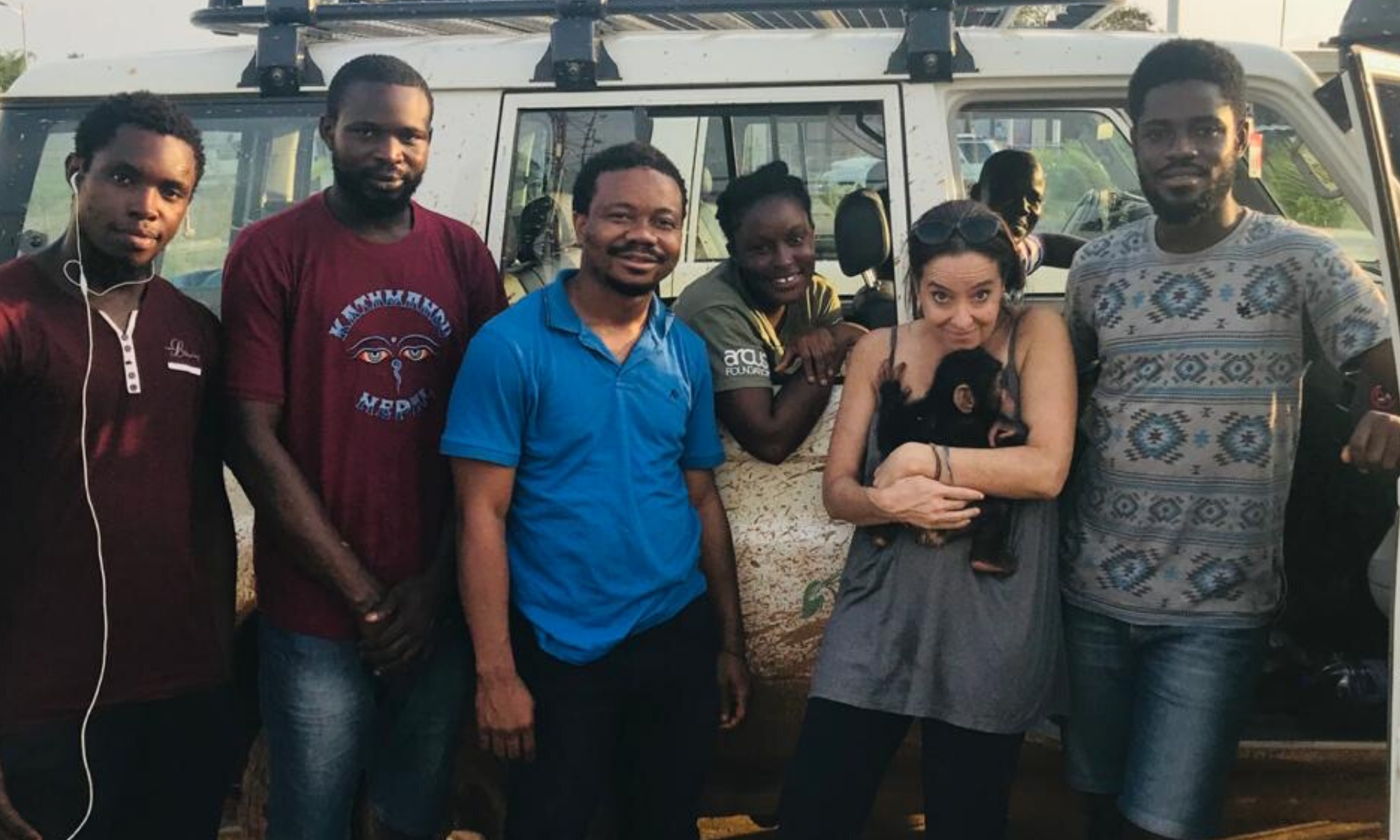 LCRP’s team also leads on the confiscation, rehabilitation and release components, in collaboration with Libassa Wildlife Sanctuary, which also offers refuge and rehabilitation for confiscated animals, as well as training for law enforcement agents in the correct handling of wildlife, required actions and and follow-up.

Sarah Gluszek, FFI’s Technical Specialist, Wildlife Trade, recently visited LCRP’s sanctuary and conservation centre: “It was a surreal experience. I wasn’t expecting to see the chimps straight away. When I got out of the car, I was being careful not to frighten them, but I needn’t have worried. As soon as I started stroking Jenny’s dog, two then three chimps came bounding towards me. Before I knew it, one of them was tugging at my leg and demanding to be lifted up. This was particularly ironic, as I’d gone to the centre with the intention of not disturbing the rescued chimps.”

And she has nothing but praise for the work being undertaken at LCRP: “It was a privilege to witness at first hand the incredible dedication of Jenny, Jimmy and the rest of the staff. What you see in the documentary is a pretty accurate representation of their hectic lives and disrupted sleep patterns.” 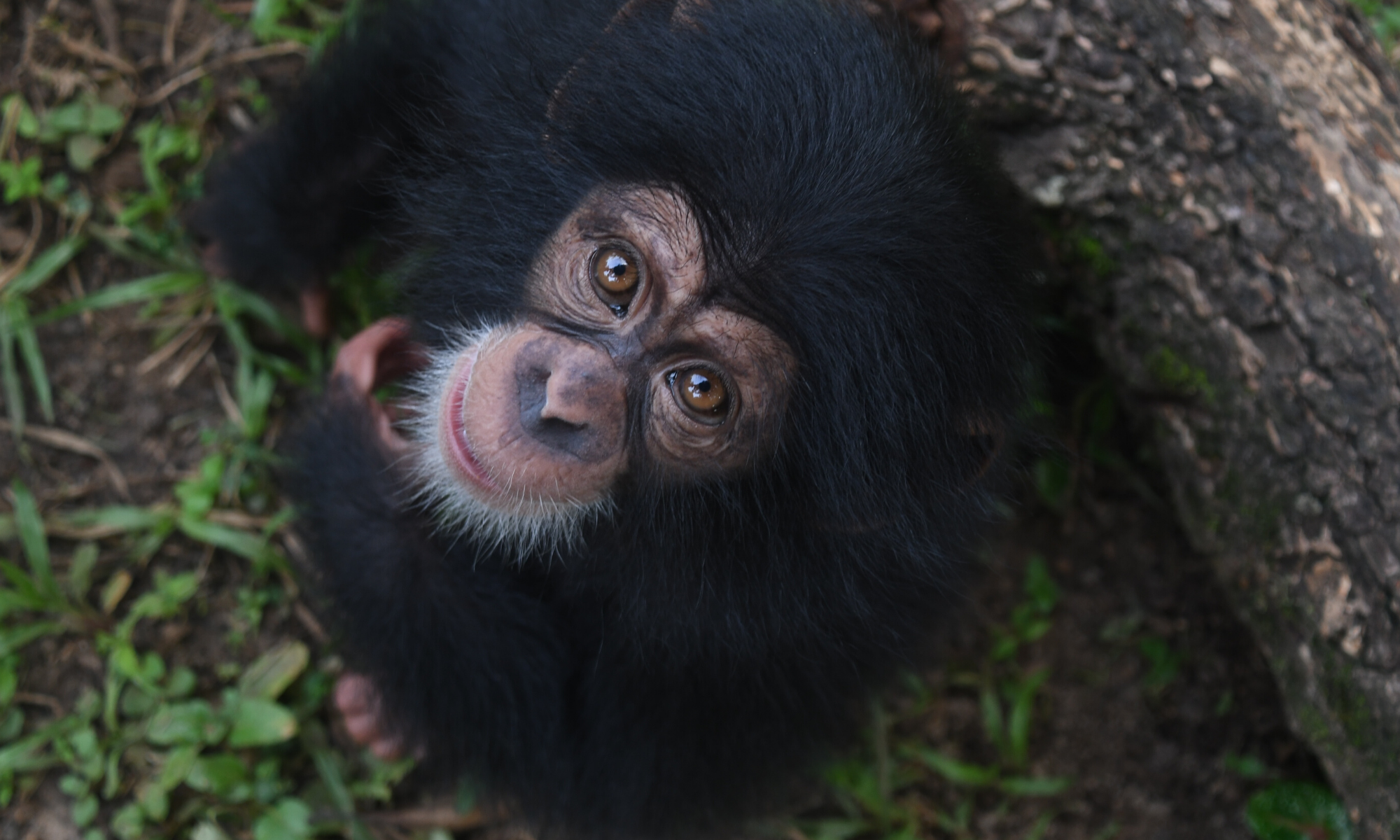 Eye to eye with Max, one of the many orphaned western chimpanzees rescued to date. Credit: Jenny Desmond

The welfare of these baby chimps is obviously paramount, but the primary concern for FFI and LCRP has to be the fate of the species as a whole. The bigger picture is that western chimpanzees are in urgent need of protection in the wild. We are committed to doing everything in our power to reverse their alarming decline.

Tackling illegal trade in chimpanzees will be a critical success factor in those efforts, but with your support we are determined to ensure that the flood of orphans threatening to overwhelm Jenny, Jimmy and their team is drastically reduced. The long-term objective for all concerned is to ensure that rescuing orphaned chimps becomes a thing of the past.

Please help FFI to tackle the
illegal trade in chimpanzees.