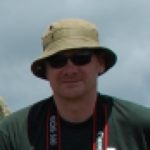 The day started out well; the second trap we checked was missing so we knew there was an animal hiding in the bushes somewhere nearby. I was joining the projects field team for a week in Vashlovani National Park. We have, over the past couple of years, been trapping wolves as part of a telemetry study linked to one of our key project components dealing with human-carnivore conflict. We’re tracking wolf movements in order to gauge their level of complicity in livestock depredation; a big issue in our project site.

Bejan, the project’s senior field biologist, jumped out from behind the steering wheel and slowly approached the site where the trap had been, until sometime last night, concealed. He needed to identify which animal had triggered the trap and, more importantly, in which direction it had gone. Attached to the leg-hold trap is a chain with an anchor at one end. The idea is that, whilst the animal is free to seek shelter away from the trap site, the chain and anchor slow it down enough for us to find it and, eventually, release it. 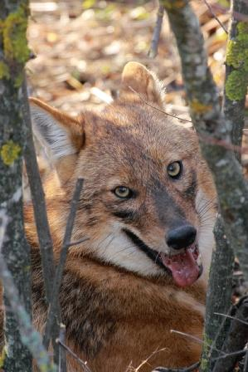 The jackal was located sheltering in nearby scrub Photo: Gareth Goldthorpe/FFI

After only a few seconds investigating the soil around the trap Bejan looked up and mouthed the word “Tura” with only a hint of disappointment. Tura is the Georgian word for jackal. Not the animal we were after. Still, we had to find the diminutive canid as it would, of course, need to be immobilised, released from the trap and sent it on its way. Vano, Bejan’s field assistant, was the one to find the cowering critter, well concealed in some nearby scrub.

The process to dart him, release him and take a few opportunistic measurements and samples was done quickly, silently and with an overarching sense of respect for the unfortunate animal. Before the hour was up, the large, healthy male was back on its feet and on its way, albeit with an air of drunkenness about him. 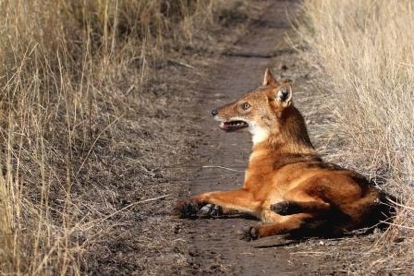 Once the 12kg male had been processed he was left in peace to recover Photo: Gareth Goldthorpe/FFI

Back in the truck, we were off to check the next trap. This was also missing and the process of finding the ensnared animal began again. Strangely, there were none of the usual tell-tale signs that give away the identity of the animal and the direction in which it left and we soon found ourselves splitting up and searching an ever increasing area. This continued into midday and, looking like we’d still be searching into the afternoon, Bejan sent Vano and I off to check the other traps while he continued searching for the mystery animal.

We returned several hours later (fortunately, no other traps had been sprung) to find Bejan still searching the area and still with no clues. The day was drawing on and things were beginning to look desperate; no-one wanted to return home knowing that somewhere out there, an animal was still caught in one of our traps.

As conventional search patterns were not working, the ideas began to get more creative and, at one point, Bejan returned to base to collect Kora, his aging Alsatian dog. Intending to set her on the trail of the elusive creature he took her to the trap site for a good sniff. Off she trotted, evidently hot on the scent, with us eagerly following behind. Alas, we returned later with nothing but a well exercised dog to show for it.

The next idea was to try a bit of howling in the hope that the beleaguered animal would reply, thus giving away its hiding place. Bejan cupped his hands over his mouth, took a deep breath and howled into the ever-increasing darkness. No response. 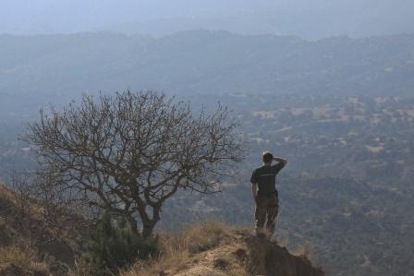 Vano searches the gorge below for any signs of movement Photo: Gareth Goldthorpe/FFI

Next, Vano tried driving along the trails, using the car headlights to reveal the animal’s position by its eye-shine; all nocturnal animals have a highly reflective layer of tissue, the tapetum lucidum, behind their retinas that help them see in the dark and when a light is shone into their eyes they appear to glow. However, for us there were no bright-eyes to spot.

Then, it happened. We remembered that the previous day we had removed the trap in question as it had been triggered by a wolf, which had somehow managed to avoid actual capture. Realisation was soon followed by howls of laughter as we became aware our entire, tiring and angst-ridden day had been spent searching for an animal that was not there; a phantom wolf. This is, we agreed, what happens when working 10 hour days for weeks on-end with no break: trapping fatigue had set in.

However, the show had to go on and the next day we found ourselves rising with the sun (thankfully late as winter fast approaches) and checking the trap lines once again. Again, around two hours into the day, a sprung-trap was spotted. Thankfully, within only half an hour, Vano had located the trapped animal and to our immense relief (and my personal excitement), it was a wolf. To quote the Bard, all’s well that ends well. 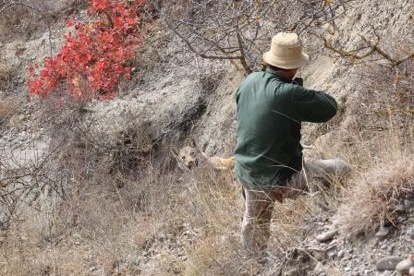 Bejan prepares to dart the trapped wolf with a tranquiliser Photo: Gareth Goldthorpe/FFI

Bejan cautiously approached the wolf and fired a single drug-filled dart into her flank. After ten minutes of silence (to minimise the stress to the animal as it slips into unconsciousness) we made our way back to the now recumbent wolf, released her leg from the trap so that Bejan could fit the collar while Vano monitored her temperature and I videoed the whole process. 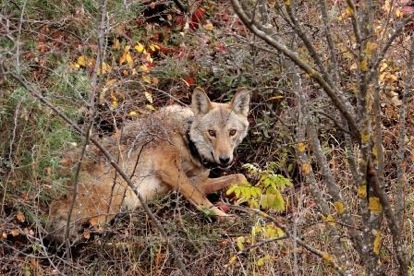 It all took about half an hour and once we were able to step back and wait for the drug to wear off, I was given the highest honour of naming her. Of course my mind went blank with only boys names (my wife and I had gone through the same process only a few months previously when our son was born) rattling around my skull. Eventually, and for no discernible reason, the name Elsa jumped into my brain and that was that.

The last signal we received from Elsa’s collar tells us that she has moved a good distance from the trap site and, so far, away from any of the numerous farms in the area. We hope that it stays that way but, with no real natural prey left in the area, the chances are slim.