On 2 February each year most countries celebrate World Wetlands Day, and this year I was lucky enough to be involved with the event in Myanmar which Fauna & Flora International (FFI) co-sponsored with the government. It was held at Moeyungyi (pronounced Mu-yun-ji) Lake just over 100 km north of the country’s largest city, Yangon.

The lake was actually created by the British colonial government in 1878 as a reservoir that was intended to keep water levels high in the nearby Bago-Sittaung canal and so increase the number of days on which the large logs could be floated down to Yangon. Those days (and those forests) are long gone. Nowadays the water is used for irrigating downstream rice fields. 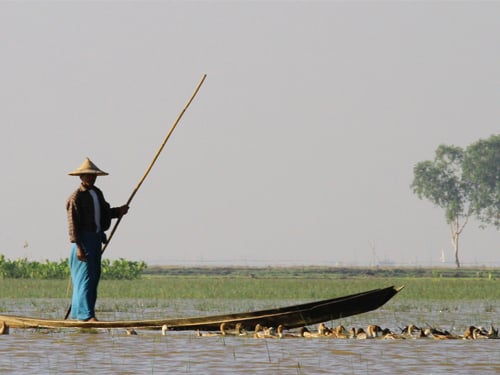 As a Wildlife Sanctuary it seeks to conserve the 70 or so species of resident and migratory water birds and their habitats, to be a place for recreation and learning for all, and to encourage active participation in wetland conservation activities. The stars of the site are the Critically Endangered Baer’s Pochard, the Vulnerable Sarus Crane and Greater Spotted Eagle, as well as exceptional numbers of Northern Pintail – up to 20,000 in some years. The site is also important for the vulnerable and beautiful Burmese Peacock Turtle. 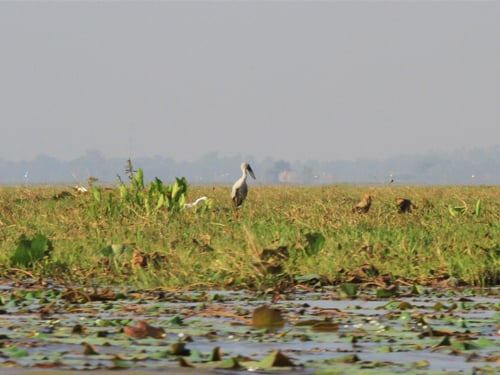 All these features contribute to it having been designated by the Ramsar Convention as a ‘Wetland of International Importance’ in 2004. It remains the country’s sole Ramsar site – but the government and FFI in Myanmar are working to change this. Watch this space!

About 100 people gathered under the trees at the side of the lake to wait for the arrival of H.E. U Win Tun, the Minister of Environmental Conservation and Forests, and U Nyan Win, the Chief Minister of Bago Region. The two of them cut a ribbon to officially open the refurbished education centre and its brand new exhibition. We all looked around the attractive exhibits before walking along to the restaurant for a delicious Burmese breakfast. I should point out that we had started our drive to the lake at 5 am and were rather hungry! The early start was to give us the chance of seeing the lake at its best. A privately-owned company, Shwe Pyi Aye Co. Ltd, started operations here in 1996 and encouraged residents of Yangon and the capital Naypyidaw some 2.5 hours away, to spend some recreation time here and promote ecotourism. Apart from the information centre, there is also a guesthouse, restaurant, bird watching towers, a meeting space, and nine small boat-shaped timber houses for rent. 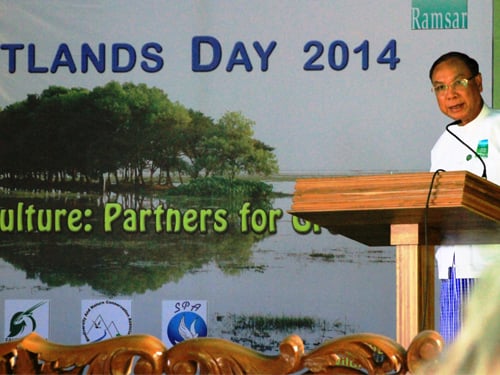 We then got into a number of long wooden motor boats, including one reserved for the media, and for 45 minutes or so enjoyed seeing some of the lake. It is much larger than I had thought – 10,000 hectares of open water and some emergent vegetation. The largest and most exciting bird we saw was the Asian Openbill whose bill, when shut, is open along most of its length. Why?!

The senior Burmese officials were in a boat together and Director U Win Naing Thaw of the Nature and Wildlife Conservation Division could be seen energetically explaining the values and benefits of the lake. 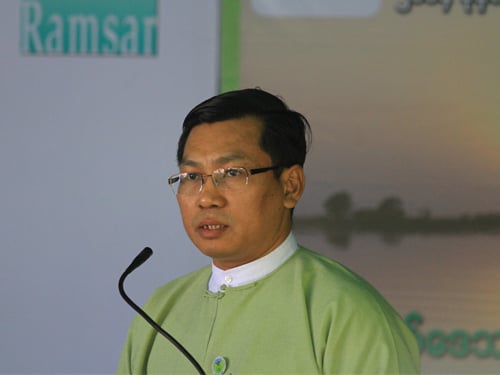 Parts of the water surface were almost completely carpeted by the beautiful, white feather-petalled ‘banana plant’ Nymphoides indica whose leaves look just a water lily, but it is in fact within a completely unrelated family. 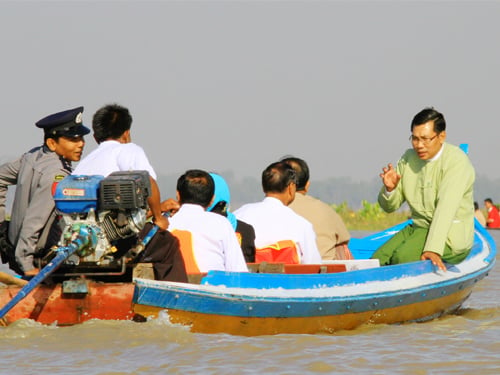 U Win Naing Thaw, Director of Nature and Wildlife Conservation, explaining the significance of wetlands to his Minister and his Director-General, Dr U Nyi Nyi Kyaw. Credit: Tony Whitten/FFI

Back on dry land we went to the large meeting space and listened to the formal speech of welcome from the Minister, and the more technical speeches from U Win Naing Thaw and the Asia-Pacific Senior Advisor of the Ramsar Convention Secretariat in Geneva, Dr Llewellyn Young.

We then returned to the restaurant for a flavourful Burmese lunch (I am a great fan of Burmese food), and said our various goodbyes.