Fauna & Flora International (FFI) is delighted to announce that two outstanding individuals working on projects in Nicaragua and Vietnam have been named as Conservation Heroes by the Disney Conservation Fund.

The prestigious awards recognise local citizens for their commitment to saving wildlife, protecting habitats, and inspiring their communities to take part in conservation efforts.

Recipients from around the world were nominated by non-profit environmental organisations, and each honouree and their nominating organisation will share a US$1,500 award from the fund.

One of this year’s winners is FFI’s very own Velkiss Gadea who is working to save sea turtles in Nicaragua. Velkiss joined FFI in 2013 and now directs FFI’s entire sea turtle conservation programme in Nicaragua, which hosts important nesting sites for leatherback, hawksbill and olive ridley turtles.

These turtles are threatened by illegal harvesting and trade for their eggs (which are eaten) and, in the case of hawksbills, for their shells (which are used to make jewellery). Entanglement in fishing nets and the destruction of nesting and feeding habitat also pose significant threats to these amazing animals.

FFI’s sea turtle conservation programme was established in 2002 to protect nesting beaches, raise awareness about turtles and the threats they face, reduce fisheries bycatch and build capacity. It is centred on Nicaragua, but works with partners throughout the Eastern Pacific.

Velkiss is responsible for managing all aspects of this programme and also serves as FFI’s liaison to the National Marine Turtle Network of Nicaragua and ICAPO – a regional network dedicated to protecting hawksbill turtles.

In addition to this, Velkiss took the lead in building a new international network (Laúd OPO), which encompasses partners across the full Eastern Pacific leatherback range and is working to help this critically endangered population to recover.

Her dedicated leadership meant that in just two years this ambitious idea became a reality, and the network now includes over 60 members with partners from throughout the region and across different sectors. As Laúd OPO gains momentum, there is renewed hope that the decline of Eastern Pacific leatherbacks will be reversed in the years to come. 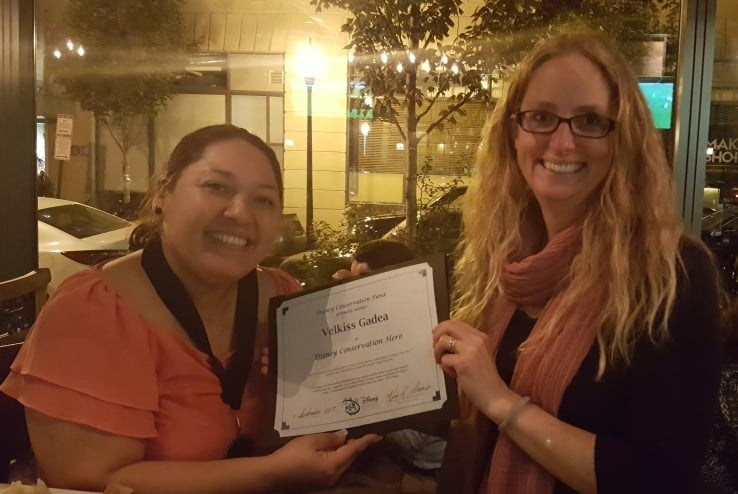 Velkiss said: “I feel most honoured to have been nominated and selected for this award by the Disney Conservation Fund which believes, as I do, that the wellbeing of people is deeply connected to the health of the planet.

“I am lucky to work amongst a wonderful group of people and want to thank my amazing colleagues at FFI, in Nicaragua, the UK and elsewhere – and my turtle ‘mentors’ throughout the region – for their invaluable support and guidance, which helps me and helps conserve our precious marine turtles.

“I am also grateful for the support of my family and my parents. This award is also for each of you and for every Nicaraguan who believes in conservation; I believe it is a real motivation for us to continue our work in Nicaragua and throughout the Eastern Pacific.”

Another of this year’s award winners is Mr Hoang Van Tue who leads the Nature Conservation Division of Ha Giang Provincial Forest Protection Department in Vietnam.

In 2002, FFI and a group of local biologists discovered a remote population of the Tonkin snub-nosed monkey – one of the world’s rarest primates – in the rugged mountains of north-eastern Vietnam. At the time, this discovery of around 60 individuals was the largest known population in the world.

The Tonkin snub-nosed monkey is threatened by illegal hunting and habitat loss caused by people clearing forest for farmland and firewood. Mr Tue also manages Khau Ca Conservation Area, part Du Gia – Dong Van Stone Plateau National Park and where this species has the greatest chance of survival, as well as leading a team of community rangers. His dedication, constant support and ability to bring people together has helped increase the Khau Ca population to approximately 125 individuals to date.

“My main task has been to lead the community-based conservation teams and the community research teams to protect and conserve the endemic Tonkin snub-nosed monkeys in Khau Ca Species and Habitat Conservation Area since the rediscovery of this species in 2002.

“I consider this award as a great motivation not only for myself but also for the conservation activities in Ha Giang Province. I would like to take this opportunity to express my gratitude to FFI and Disney Conservation Fund for your support and recognition,” Mr Tue said.

A salute to all our conservation heroes

At Fauna & Flora International, we are deeply proud of all our staff and partners who work tirelessly, against all the odds, to ensure a sustainable future for our planet.

We would like to congratulate Velkiss Gadea and Mr Hoang Van Tue for their well-deserved awards, and would also like to take this opportunity to salute every one of our hardworking staff – you are all heroes.

For information on Disney’s commitment to conserve nature and a complete list of 2017 Conservation Hero Award recipients, visit Disney.com/Conservation.