Celebrating conservation heroes who dispel the myth of the ‘weaker sex’

As a child I was always interested in conservation and the natural world. Unlike many of my childhood girlfriends, I was more at home collecting insects than I was playing with Barbie. While playing with dolls was the more socially acceptable pastime, I was lucky enough to have parents who were happy to let me follow critters about, rather than try to get me into a frilly dress!

Women over the centuries have had certain expectations placed on them from a young age – what to wear, how to behave and of course, what they would become when they grew up. Sadly for a lot of women around the globe this is still the case, but in western society, we have come quite a long way.

Gone are the days of a ‘woman’s place’ being restricted to the household. Women are excelling, and in some cases taking over, the working world and pioneering many areas of research, politics and conservation.

From conservation heroes like Dian Fossey and Jane Goodall, prominent women in conservation have been idols for young girls to look up to. Now many women are breaking through into previously male dominated fields, following their passions, and making a real difference in the process.

Take my friend Ernie Suyanti Musabine, or Yanti as we call her, an Indonesian wildlife veterinarian. Yanti works for the Department of Forestry, Indonesia and helps Fauna & Flora International’s Tiger Protection & Conservation Units in Sumatra. 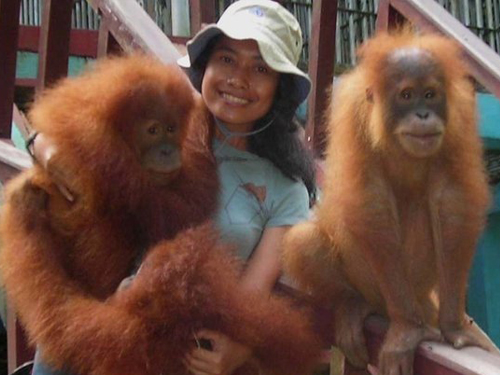 Yanti with orangutans in Indonesia

She lives in a predominantly Muslim country where women are expected to settle down and marry, yet Yanti has a very independent career, patrolling the forest and protecting endangered wildlife.

Based at the Elephant Conservation Centre, she coordinates the Conservation Response Units and is a member of the wildlife rescue unit BKSDA (the Nature Resources Conservation Agency).

Yanti’s work plays an important role not only saving Sumatra’s wildlife, but developing relationships with local villages to educate and promote positive responses to wildlife conflict and awareness of ecotourism.

“In every tiger-human conflict mitigation, my team and I always do education to improve awareness to local people about not to disturb the tigers, such as poaching or kill it.

“Because in many occurrences a tiger shall kill human if it felt disturbed. In Bengkulu people who are often killed by the tiger is illegal loggers and poachers and people gardening in the jungle.

“In fact it seems a tiger can distinguish a person who is a threat to them and with someone who will not bother them as tigers never disturb a forest patrol team or a rescue team, even though they often have to stay in home range of the tiger and sometimes also to see it in the jungle.

“We want to make Elephant Conservation Centre not only as a centre of elephant and tiger conservation  in the Province of Bengkulu, but also as a centre for education of wildlife conservation, research, and ecotourism.”

Another good friend of mine is Jane Horgan. Jane and I used to work together in the zoo industry and Jane loved cheetahs. So much in fact, that one day she decided to follow her passion and move to Africa to help protect them in the wild.

Jane has been there for four years now working for Cheetah Conservation Botswana. 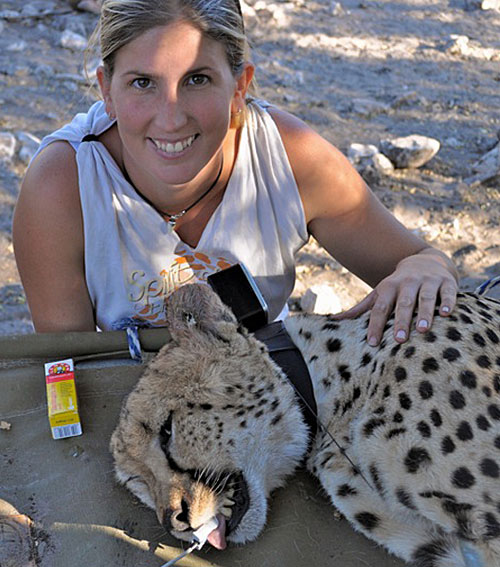 “We combine research, community work and education into trying to find ways that livestock farmers can coexist with predators and teach these to farmers around the country and kids in the schools.

“We teach them why it’s important to conserve these species and how they can benefit from having them on their farms.

“We teach them what damaging effects lethal control can have not only on the predator populations, but also on the ecosystem as a whole.

“Having wildlife on farmlands contributes to the overall health of the ecosystem and its really important for farmers to respect and conserve them.”

Jane is completing her Masters by researching ways to mitigate conflict between game farmers and wild cheetah populations and more specifically, looking at how livestock guarding dogs are used in Botswana to protect livestock from predators.

Jane is investigating whether local mongrel dogs (which are most widely used as livestock guarding dogs in Botswana) are as effective as pure breed dogs, and how much profit a farmer can make from having one.

“My preliminary findings are indicating that crossbreed dogs (like these local Tswana dogs) are significantly more effective than pure bred dogs, which is revolutionary… many low-income farmers aren’t using dogs because they think they have to have these expensive dogs and they can’t afford them.

“The great thing is that these local dogs are cheap and now we’re finding that they’re also really effective at deterring predators.”

Jane’s Masters will hopefully underscore that local dogs are less expensive to obtain and feed, and therefore encourage many more low-income farmers to adopt the concept and prevent livestock losses whilst improving tolerance of predators like cheetahs by farmers.

“The average farmer is saving about A$2,300 a year when they have a livestock guarding dog. For a low-income subsistence farmer in Africa that makes a world of difference.”

Yet another passionate conservationist – based in Australia – is Kate Winter.

Kate has worked on many projects over the years, from everyday wildlife rescues such as hit and run wildlife victims, to large scale council wildlife management projects such as responding to heat stress, by working with the local wildlife groups to rescue over 100 young flying-foxes and collect the deceased bats (3,000 total).

“I think that urban wildlife management is a key emerging challenge for the people working in the environmental industry.”

The data collected has been used to confirm the protected status of Peak Island as a preservation zone on the Southern Great Barrier Reef.

Kate worked as the Senior Scientist for the Queensland Turtle Project, living and working on-site at Mon Repos.

Mon Repos beach is the largest loggerhead rookery in the South Pacific and Kate trained volunteers in the methodologies of marine turtle monitoring, assisted with the attachment and removal of GPS trackers that were investigating inter-nesting habitat of loggerhead turtles, and collated and analysed data sets collected for the program state-wide. 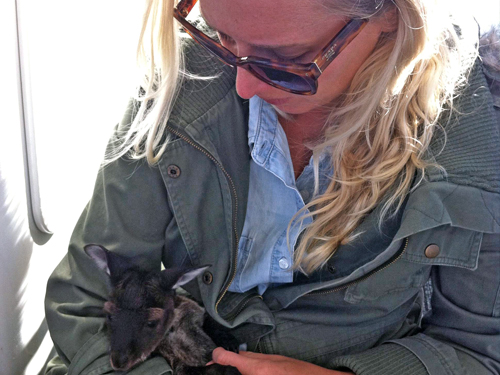 Kate Winter and a wallaby in Australia

“I am drawn to studying marine turtles because a large portion of their life cycle is largely still mystery to scientists, new discoveries are so rewarding to the sea turtle community.

“I have respect for sea turtles, as they are the true survivors that have adapted over thousands of years to nest at our current beaches.

“I am driven to understand how they will continue to adapt to changing climates with the added pressure of anthropogenic impacts.”

These women, although on three different continents and leading different lives, share one very important thing, a strong belief in themselves and the work they do.

Each of us all has the potential for greatness and to make a difference, and for women sometimes those opportunities are harder to come by or the steps in between a little more challenging. But please remember, the harder the journey, all the more worthwhile once you get to your destination.

Never give up on your dreams and let future women continue to shape our world.