Caught in a trap: red pandas in Myanmar

‘If you step into a trap, don’t move. The more you struggle the deeper the teeth with bite into your leg.’ This potentially good advice was one of the first things my guide said to me before we set off from Pade village in Myanmar’s far northeastern mountains. I had seen these traps in the village, huge rusting gins with wicked interlocking teeth. They are designed to catch bears, but are indiscriminate, trapping red panda, monkeys, and even people who are careless enough to step on one. I had measured the height of the jaws against my boot: they closed just above the ankle.

My guide was also a hunter, a member of the Lisu minority group of Burmo-Tibetan ethnicity. He spends most of his time in the mountainous forests catching animals, either with these iron traps or with a crude local musket. For the most part he is not hunting for food but to fuel China’s insatiable trade in traditional medicine. The motorbike propped up outside his bamboo hut was bought with the cash raised from selling bear gall bladders and smoke-dried macaques. He also occasionally catches the rare Myanmar snub-nosed monkey, the animal we had come to look for. 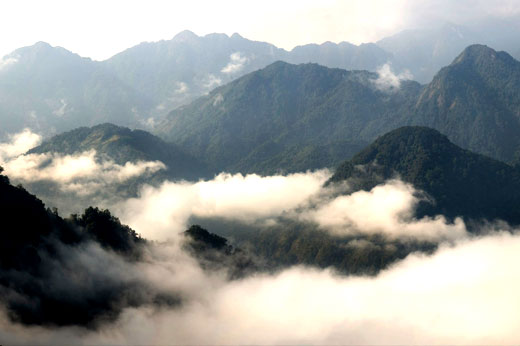 Despite their skill in decimating the local wildlife, these hunters are also crucial to conservation efforts in remote places like northern Myanmar. Their knowledge of the local terrain and the animals that occur there is fundamental in the first wave of biodiversity surveys. It was through these local hunters that we first learned about the new species of snub-nosed monkey.

Armed with a dozen traps of our own – more environmentally sound camera traps – we hoped to get the first photographs of this elusive primate. By early 2011 the only evidence we had of this species was a series of skulls collected from various remote villages and a single dead specimen, which was used to describe the Myanmar snub-nose monkey Rhinopithecus strykeri.

I knew this was going to be a difficult job and I had little faith that we would capture an image of a live monkey. The terrain here is tough: step-sided valleys soar to over 3,000 metres and are covered in dense forest. Local hunters claimed there were perhaps fewer than 300 snub-nosed monkeys left. 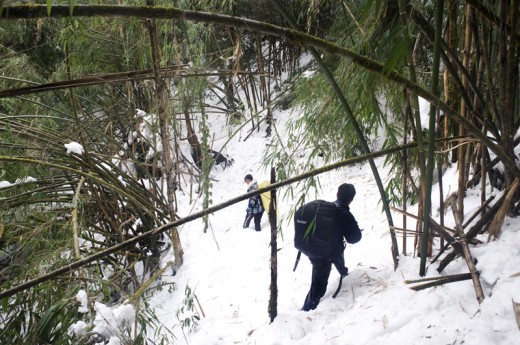 The elections held in November 2010 had made travel in Myanmar difficult and we were forced to delay the expedition until January and the depths of winter. The monkeys are reported to live high up on mountains in the bamboo and coniferous forests above the tropical evergreen zone.

We had no idea as we set off from Pade that this area was also now deep under snow. Two days walking took us to the snow line and we made camp on a blustery ridge too narrow for tents. We spent that night under the stars shivering and listening to the wind roaring through the trees.

The next day we struggled through ever deepening snow until we came to a clearing among giant trees draped with trailing lichens. Above the sky was a mesmerising blue and flocks of bright Himalayan birds blew through the trees.

It was silent and beautiful, but I realised we could not set camera traps here – the snow was too deep. The guides refused to go any higher, fearing a further snow fall might trap us in the mountains. They also pointed out that there were iron traps set beneath the snow. We had no choice but to turn back and abandon any hopes of photographing the monkeys.

Although capturing images of the monkeys was a primary focus of the expedition (led by Ngwe Lwin from BANCA and supported by an international team of primatologists from FFI and PRCF), another equally important part was to train our Myanmar counterparts from BANCA in camera trapping techniques. 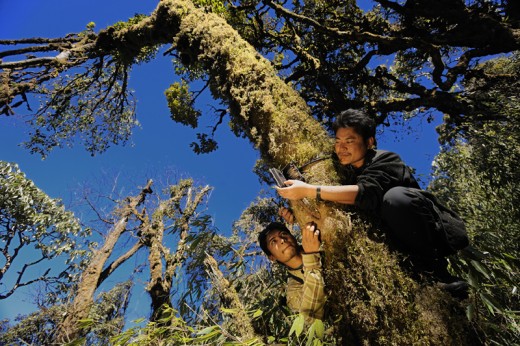 The snub-nosed monkeys were not the only interesting mammals living in this area. Red panda, the rare tufted deer, and the strange-looking takin were also reported by the hunters. We had seen tracks of red pandas in the snow so I decided for the purpose of both research and training we would target this species, which in Myanmar occurs only in these northern most mountains.

A few days later we had descended the mountain and climbed to almost 3,000 metres on an adjacent peak where the snow wasn’t as deep. Here in the rhododendron forests we set the cameras, targeting red panda where possible. We were lucky enough to discover a panda latrine where the animals regularly came to defecate, clear evidence that the species still occurred. My counterparts Saw Soe Aung and Thet Ngai Aung were excellent students and within four days we had all the cameras set. 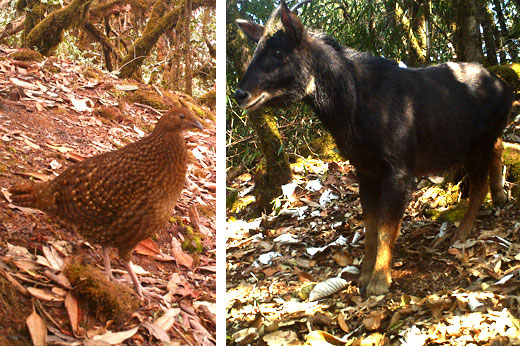 A month later the two Aungs returned to recover the traps. I met them in later in Mytkyina and we looked at the results: images of tufted deer, Chinese serow, Gongshan muntjac, and the beautiful pheasant Temminck’s Tragopan. But best of all, a stunning image of a red panda looking directly into the camera and feeling grateful, perhaps, that the traps we had set were harmless.