Captivating Caribbean island to be given a new lease of life

Sophia is FFI's Eastern Caribbean Coordinator. She was born in St Vincent but now lives in Antigua. Sophia specialises in the management of marine protected areas and fisheries, but currently works on a wide portfolio of projects including globally threatened trees, endangered reptiles, habitat restoration and strengthening the conservation capacity of FFI's partner organisations.

The Government of Antigua and Barbuda has announced plans to remove goats and invasive rats from its most rugged and remote offshore island to allow endangered wildlife and their habitats to recover.

Redonda is home to a unique array of plants and animals, including rare lizards found nowhere else in the world. The uninhabited and seldom visited island is also formally recognised as an Important Bird Area, supporting globally-significant numbers of seabirds.

However, the island’s plant and animal populations are disappearing fast thanks in large part to its population of over 5,000 aggressive black rats (an invasive alien species) which prey heavily on the island’s wildlife. Together with the herd of long-horned goats that was brought to Redonda by humans more than a century ago, these mammals have transformed this once-forested island into a moonscape. So few plants survive that even the goats now face starvation.

Redonda from the air. The island, once forested, now looks like a lunar landscape. Credit: Jenny Daltry/FFI.

Redonda is over 50 hectares in area and rises dramatically from the Caribbean Sea, 56 km south-west of Antigua. Goat skeletons litter the island, along with the relics of stone buildings from a guano mining community that lived here until the First World War. With few trees left to stabilise the ground, soil and rocks are crumbling into the sea, threatening nearshore coral reef in the waters below.

“We cannot stand by and watch as a part of our country, part of our history, disappears. We cannot be responsible for decimating animal populations on a regional scale,” says local conservationist Natalya Lawrence of the Environmental Awareness Group (EAG).

“I am immensely proud that my ministry has been a driving force in the development of this major initiative,” says Honourable Molwyn Joseph, Minister of Health and the Environment. “Restoring Redonda to its full glory will be a great achievement for our country.”

A new home for starving goats

One of the first steps will be to capture and move the remaining goats to Antigua, where they will be cared for by the Department of Agriculture.

The miners also left behind a herd of long herd goats. Together with the rats, these animals have transformed this once-forested island into a moonscape. So few plants survive that even the goats now face starvation. Credit: Jenny Daltry/FFI.

“The goats are starving to death on Redonda and must be removed for their own sake,” explains Astley Joseph, Deputy Director of the Department of Agriculture. “We believe it is important to rescue this rare breed because it could have useful drought-adapted genes that would benefit other herds on Antigua and elsewhere.”

Rats will then be eradicated using a rodenticide bait that has previously been used to restore more than 20 other Caribbean islands without harming native wildlife. This is scheduled to be completed by mid-2017. 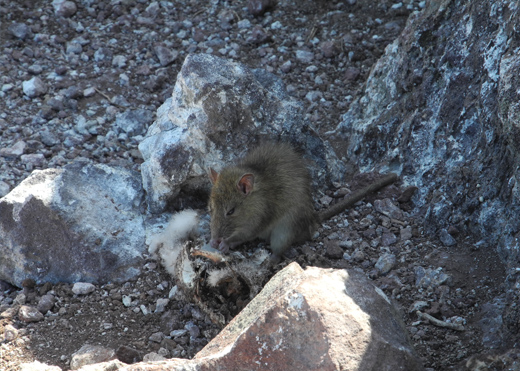 Black rats are omnivorous, and are known to attack native wildlife, such as ground-nesting birds and reptiles. Credit: Jenny Daltry/FFI/OICP.

“We and other international organisations have offered our support because we recognise that this is a very challenging yet globally important initiative” says Sophia Steele, Eastern Caribbean Project Coordinator at Fauna & Flora International. “Recent studies have identified Redonda as the most important island to restore in the Eastern Caribbean due to its Critically Endangered wildlife and the high probability of lasting success.”

The new programme is funded by the UK Government’s Darwin Initiative, the National Fish and Wildlife Foundation, the Taurus Foundation and private sponsors. Additional technical and in-kind support is being provided by Caribbean Helicopters and Syngenta Crop Protection AG.

Dr Helena Jeffery Brown of the Department of the Environment says, “Antiguans and Barbudans will be proud as Redonda becomes a role model for regional biodiversity conservation. This will be yet another example of how this country is proactive in meeting the national and international commitments it has made to conserve biodiversity.” 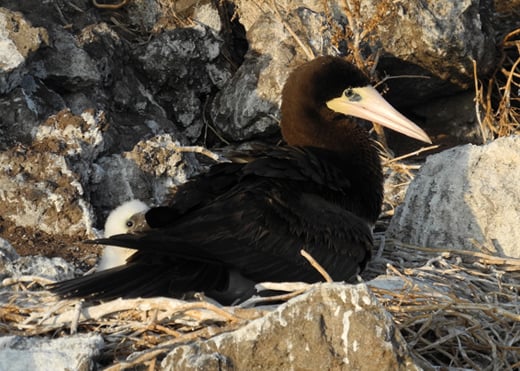 Redonda is also an Important Bird Area thanks to its regionally- and globally-significant colonies of seabirds, including these brown boobies. Credit: Jenny Faltry/FFI/OICP.

Antigua and Barbuda has a wealth of experience and success under the ongoing Offshore Islands Conservation Programme which has, since 1995, removed rats and other invasive pests from 15 islets closer to Antigua in the North East Marine Management Area. This has saved the Antiguan racer – once the world’s rarest known snake – from extinction, and enabled an incredible recovery of other native animals and plants. Many tens of thousands of residents and tourists now visit and enjoy Antigua’s pest-free islands every year.

“I am most excited to see the progression of recovery on Redonda once the threat of invasive species is removed,” says local biologist Andrea Otto, who will be part of the research team documenting the recovery process. “I want to see which types of vegetation spring up first and which birds return. From what we have seen on the smaller islands we have restored, the transformation will be incredible.”

Sophia is FFI's Eastern Caribbean Coordinator. She was born in St Vincent but now lives in Antigua. Sophia specialises in the management of marine protected areas and fisheries, but currently works on a wide portfolio of projects including globally threatened trees, endangered reptiles, habitat restoration and strengthening the conservation capacity of FFI's partner organisations.