Written by Neang Thy

The caecilian is unknown to most Cambodians as it lacks a Khmer name. It has an elongated shape (like a snake), and is without scales (like a worm or eel), but is not any of these creatures. It is a caecilian that likes to burrow underground or move on the wet surface of soil.

These creatures vary hugely, in shape, colour and size. They are cryptic among species, and well camouflaged in the microhabitats they live in. Mostly nocturnal, they are more active during the wet season, and largely inactive during the day and dry season. In Cambodia, there are now two species: I. kohtaoensis, and I. cardamomensis.

My journey in herpetological research began in 2003 with Dr Bryan Stuart, an American herpetologist from the North Carolina Museum of Natural History. 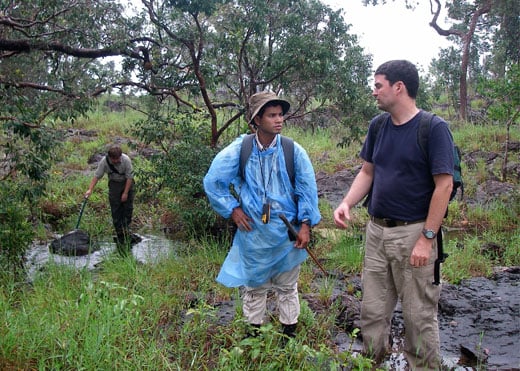 Neang Thy with Dr Bryan Stuart from the North Carolina Museum of Natural History. Credit: FFI

I still remember my first time conducting a night survey. We were looking for nocturnal amphibians and reptiles and it was so scary! It was in November 2003 at O’Raing in the Seima Biodiversity Conservation Area, Mondulkiri Province in Cambodia’s east. I remember seeing a 3.5 m king cobra, and in its mouth was a rat snake, similar in size.

In the same month in Ratanakiri Province (adjoining Mondulkiri, to the north-east), one night under heavy rain we were walking along a small, fast flowing stream. I observed a creature unknown to me – it was long, black and had a lateral yellow stripe. It was slippery like a worm, and moving very slowly on bare soil. What a disgusting creature, I thought. My herpetological career had begun and I had met my first caecilian, the previously discovered Koa Tao Island I. kohtaoensis. 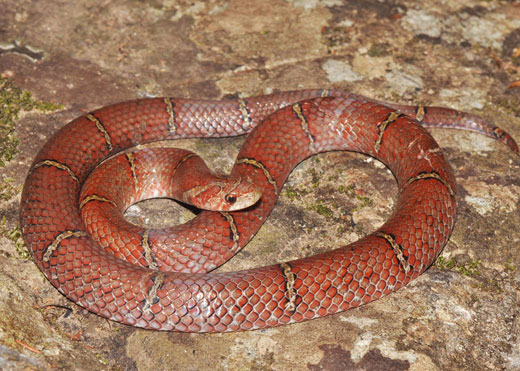 Since joining Fauna & Flora International in Cambodia in 2004, I have undertaken a lot of field work to the Cardamom Mountains to look for amphibians and reptiles. In 2009, working with a group from La Sierra University of California, USA, I was so excited to discover a black and unstriped caecilian under a log during the day.

In 2010, a second specimen was spotted in a pitfall with a third specimen found under another log. During a 2012 field trip with Royal University of Phnom Penh (RUPP) students, one of our team members spotted the fourth specimen crawling on a stream bank at nighttime. All of these were found in Phnom Samkos Wildlife Sanctuary, a protected area of the Cardamom Mountains.

These Cambodian specimens were collected by myself and Dr Lee Grismer from the La Sierra University, with final confirmation from lead paper author, Dr Peter Geissler from the Stuttgart State Museum of Natural History in Germany. Confirming the discovery of the I. cardamomensis caecilian made us very happy!

The Cardamom Mountains is a vast and mysterious tropical landscape, and on every forest visit we have the big dream of spotting unknown amphibians and reptiles. This goal and good luck go hand-in-hand. Sometimes we pray to find a new species, and wonder how in such a large landscape finding previously undiscovered creatures is even possible! 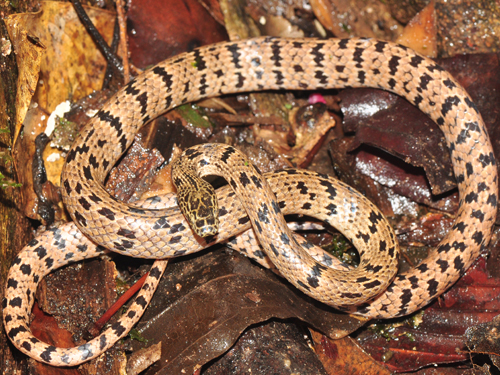 It is not easy to find new species. A combination of sampling techniques is used, ranging from opportunistic searches to drift fence guided pitfall traps. The team picks up rotten logs and turns these over or splits them apart to try and find an animal inside or fossorial (or burrowing) animals underneath. At night, with head torches and spotlights in hands, our small team walks along streams or along forest trails to look for nocturnal species.

Each time we find a new species, we always clap hands together and applaud the success of the trip. Finding a new species is always exciting – to identify a new life on earth, although the species may have existed for millions of years, is nothing short of thrilling.

Finding and having museums recognise a new species is only the beginning – now the animal has a name and a partial geographic distribution, but we still know almost nothing of its biology. Still much to be learned!

Cambodia now boasts more than 22 new species (including 10 amphibians and 12 reptiles) discovered and described since 2000.