Breathing space for a marine world under pressure 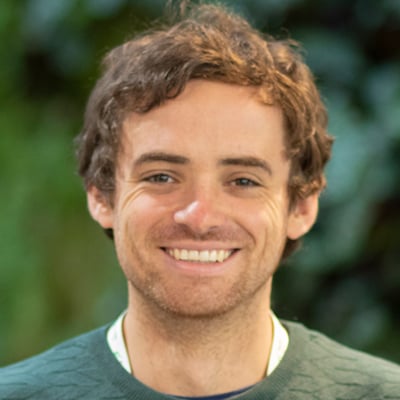 Henry is a marine conservationist with a background in coral reef ecology, fisheries management and the delivery of conservation training. His role within FFI is to provide regional support to our portfolio of marine projects in Cambodia, Myanmar and Indonesia.

A small, motorised fishing boat heads out to sea from the port of Sinabang, leaving behind the remote island of Simeulue, off the coast of western Sumatra. Noticeable on the deck is a tangle of plastic tubes, linked up to a roaring, spluttering engine. The on-board fishers are going ‘compressor fishing’, a practice that involves divers searching the seabed for lucrative octopus, grouper and sea cucumber, all the while relying on air supplied by a single plastic lifeline, snaking precariously up to the surface. The rewards can be great – fishers are able to stay deep underwater for long periods, harvesting catches that would be inaccessible to those using other fishing techniques. However, this method is fraught with dangers, as local Simeulue fisher, Anhar, can testify.

On a previous compressor fishing trip, while he was searching among corals and rocks for his catch, Anhar’s air supply was accidentally turned off.

Fighting to survive, he rapidly swam 30 metres to the surface to catch his breath, but this fast ascent resulted in decompression sickness – an excruciating  and potentially deadly condition (more commonly known as ‘the bends’) – where blood vessels are blocked by expanding gas bubbles, which can badly affect joints and nerves. Consequently, Anhar suffered permanent partial paralysis, a devastating injury often seen among compressor divers.

Although he is still able to fish from a boat at the surface, Anhar’s life has been profoundly changed by this accident. 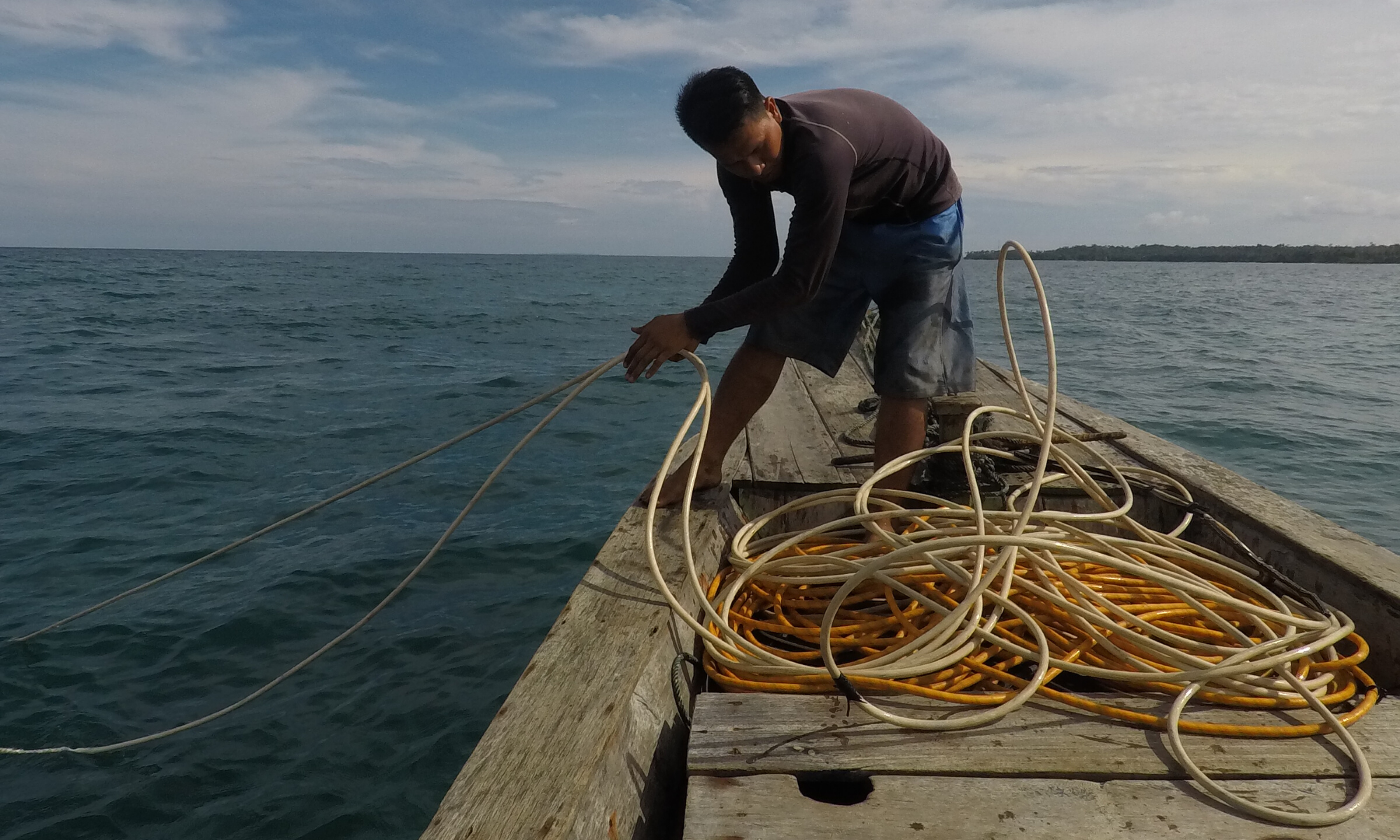 This tangle of hose is the lifeline linking the fisher to their air supply. Credit: Indra/FFI

A recent survey of Simeulue’s compressor fishers by Fauna & Flora International (FFI) saw 98% of them reporting some form of mishap or injury as a result of engaging in this hazardous practice. Furthermore, between 2012 and 2014, 12 deaths in Simeulue were attributed to compressor diving. The situation is exacerbated by poor understanding of the health risks and limited access to proper healthcare for pressure-related injuries, which require urgent treatment in specialist recompression chambers. Currently, victims are often treated through traditional methods, which may have limited efficacy.

Despite being incredibly risky, and illegal under Indonesian law, compressor fishing remains widespread. Beyond the dangers faced by the compressor fishers themselves, this fishing technique can also have severe impacts on coral reef biodiversity. Able to remain underwater for long periods, compressor fishers can quickly harvest their catch from across vast areas of reef, either using spears or by suspending large nets that indiscriminately capture all marine life trapped within. This intensive fishing pressure can deplete populations of economically important species such as grouper, octopus and sea cucumber, and deprive small-scale fishers of vital resources that they access utilising traditional gears. 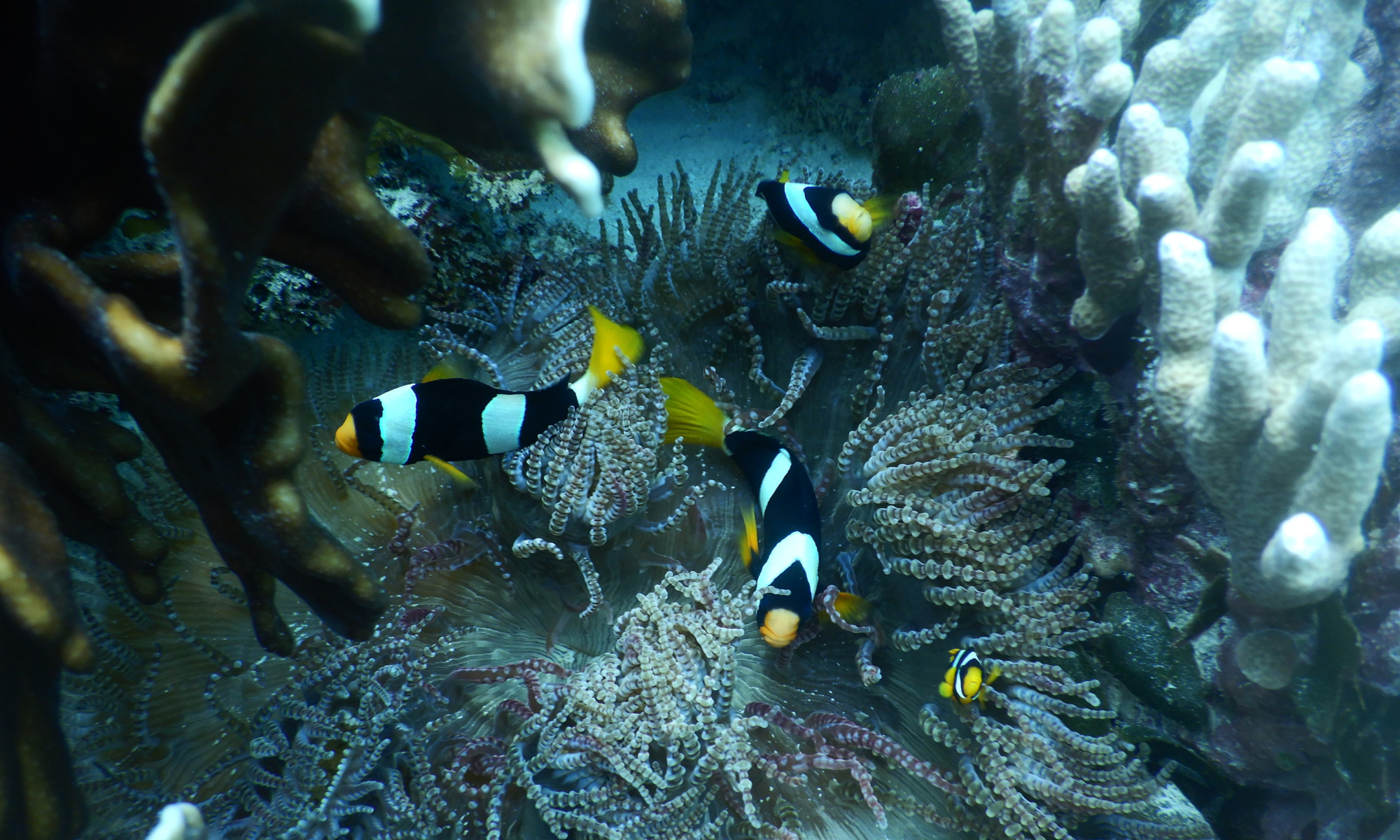 The stunning diversity of life found in Simeulue’s waters is threatened by compressor fishing. Credit: Indra/FFI

FFI has worked in Pulau Sinabang, Siumat dan Simanaha (PiSiSi) Marine Protected Area (MPA) on Simeulue Island since 2011, operating to secure the traditional fishing grounds of communities who reside within the protected waters. PiSiSi MPA also contains significant areas of healthy reefs, which sustain highly diverse coral, fish and invertebrate species. Illegal compressor fishing has been identified as a key threat to both local fisheries and the marine biodiversity of the site. FFI supports communities to patrol their traditional fishing grounds in order to observe, report and deter compressor fishers, as well as resolving fisheries conflict through customary court mechanisms unique to the region’s coastal areas. This work is paying dividends, with reported compressor fishing incidents in patrolled areas declining by more than 75% between 2015 and 2018. In further encouraging news, recent underwater surveys indicate that the biomass of reef fish in community-protected areas within PiSiSi MPA is up to three times higher than in surrounding, unmanaged, areas.

To fully address the social and ecological issues posed by compressor diving, however, FFI recognises the importance of engaging with those involved in this activity, seeking to understand their motivations and searching for ways to enable a transition towards safer, more sustainable fisheries. Our surveys of compressor fishers are the first step to developing a more in-depth understanding of this complex problem, and we are collaborating with regional government to increase awareness in partner communities of the risks associated with compressor diving. Some compressor fishers, like Rosmalian, have already seen enough to move out of the profession: “I stopped diving 15 years ago. I don’t want to dive using a compressor anymore because the risk is very high. I also don’t allow my child to dive like I did before.”

As long as compressor diving remains a lucrative opportunity without robust deterrents and alternatives, however, many fishers will continue to pursue this high-risk, high-reward activity. By engaging with the issue systematically, and with the support of new funding from the UK government’s Darwin Initiative and Arcadia – a charitable fund of Lisbet Rausing and Peter Baldwin, FFI and partners seek to improve prospects for both the fishers and the coral reefs of Simeulue Island.

Find the full report detailing the results of our survey on compressor fishing in Aceh province, Indonesia, here.

Henry is a marine conservationist with a background in coral reef ecology, fisheries management and the delivery of conservation training. His role within FFI is to provide regional support to our portfolio of marine projects in Cambodia, Myanmar and Indonesia.