‘Be prepared’: the motto of scouts and photographers alike

It is a rare occurrence for wildlife photographers to try and photograph large terrestrial rainforest mammals in their natural environment. The terrain is too difficult, the light generally poor, and the animals themselves scarce and unpredictable. This all adds up to an almost impossible task.

There are two options: either a long and probably fruitless wait in a hide (Frans Lanting spent two weeks in a jungle hide waiting for peccaries that never came) or being in the right place at the right time, with the right equipment. A further caveat to this is that the equipment also has to be ready. It was only because I was given a lucky break twice in one day that I managed to get this image of Sumatran serow.

The Sumatran serow is now an increasingly scarce animal. The IUCN class it as Vulnerable because, although living in remote and vertiginous habitat, it is a species actively targeted by hunters. Not only is the meat sought after, it also suffers the unfortunate distinction of being an animal with a perceived medicinal value. Both the short horns and the bones are used in traditional remedies, sometimes for setting broken bones. 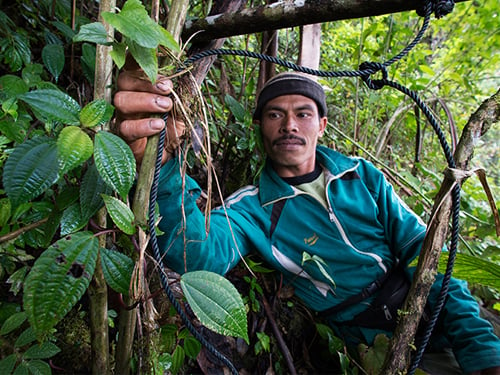 During six years in Sumatra I had seen only one serow, a huge male animal that dashed across the road in front of my Land Rover. And despite hundreds of thousands of hours camera trapping, we had only photo-trapped serow once, at 2,700 metres on a volcanic peak. That animal had two ropes snared around its neck.

My lucky break came one sunny day in the east of Kerinci Seblat National Park. I was leading two ornithologists from BirdLife International, on the lookout for some of Sumatra’s endemic birds.

While they were trying to locate Salvadori’s pheasants, I took a walk to a large saltlick nearby. Usually I would approach this area preparedly. It is a volcanic phenomenon, with hot sulphurous water rising from a vent in the river. The mineral-rich water and soil attracts large mammals, and over the centuries they have created an open grassy area, probably the size of a football field in an English village.

This spot was popular with sambar deer, and occasionally, elephants. I had recently spent five days sitting in a hide overlooking the saltlick, and in that time got a few shots of sambar deer.

It was because of this that I didn’t creep quietly up on the saltlick with my camera ready. I knew I couldn’t get any better pictures of the deer than I already had. I arrived there quietly, nonetheless, and sat down beneath a tree to write up my notes. My camera and lenses were in my backpack beside me, everything wrapped in double plastic bags to keep out the humid rainforest air.

Twenty minutes later, while engrossed in my writing, I heard a snort.

Looking up, I saw a family of bearded pigs 25 metres in front of me, completely out in the open: two huge adults, a sub adult (or ‘teenager’ if you like), and eight stripey piglets.

These are impressive animals, twice the size of the average wild pig, and sprouting a wild thicket of hair from their snouts. There are few pictures of this species in the wild and this was a magical opportunity.

I was clearly downwind, for although the animals were close, they had no idea I was there, despite being in full view. The moment I reached for my bag they sensed something, and one of the adults raised its head. Its myopia was comical as it gazed my way. Seeing no movement (I was frozen like a rabbit in headlights) it went back to grazing.

I made another furtive move to open my bag, knowing it was pointless. There was no way I could get the camera out, open two plastic bags to retrieve my telephoto lens, and attach it to the camera without them noticing.

That second movement was enough to alert the largest of the pigs. It raised its snout and came towards me.

It was only then that I realised I might be in danger. An adult bearded pig weighs in at up to 150 kg and has tusks like the sharp end of a pickaxe. When I had bumped into bearded pigs in the forest they had always ran away shrieking, but this animal had piglets to defend.

With snout raised it approached to within about 10 metres, its porcine eyes straining. I turned to stone and tried desperately not to blink. I understood now why some animals freeze when they think they have been discovered: it works. The pig ambled back to its comrades and slowly they traversed the open saltlick while I sat frozen and cursing.

Wildlife photographers live for these moments. I hadn’t been ready, and I had lost a fantastic shot: a family of bearded pigs in plain sight. I sat there immobile until the pigs disappeared behind a tree. Once they were out of sight I wildly scrabbled for the camera and unwieldy telephoto lens.

I should have approached the saltlick prepared; I should have set everything up before I started writing notes…

The agony of hindsight. Instead I sat cursing my luck. Of course I had been lucky to see the pigs, and for anyone but an unprepared photographer this would have been a fantastic sighting. It was my carelessness that was at fault.

I sat for half an hour hoping the pigs might come back. They didn’t. I carefully stalked them, but they had gone.

Que serow, serow – whatever will be, will be

My plan that morning was to head to a spectacular waterfall above the saltlick area. At least I could salvage something from the day. Normally I wouldn’t walk with a long telephoto lens on the camera. It isn’t good for the camera, for a start, but it also makes progress difficult. However, this morning I left the lens on and the camera attached to the tripod as I trekked, still berating myself, towards the waterfall.

At one point, stumbling through a meadow beside the river, I trod in a hidden elephant footprint and went sprawling. The camera fell forward and the long lens dunked perfectly into another water-filled elephant footprint, like a sponge finger into a cup of tea. At this point I really did begin to feel victimised by the universe, and I continued to the waterfall wondering what was the point of anything.

By the time I reached the falls – a spectacular sight in itself – the light was poor and I knew I was not going to be taking any award-winning landscape shots either. I parked the camera and tripod and walked to the edge of the open crater beneath the falls.

Suddenly, from the corner of my eye, I saw movement.

A serow came out of the forest edge and trundled down the open crater. Once again I was in full view and I had to freeze like a surprised owl. The serow leapt the river in one neat jump and came towards me. Fortunately, there was a huge rock between my position and the falls. The moment the serow disappeared behind it I scurried to grab the camera. In moments I was in position and the second the animal emerged I was focused on it.

Amazingly it stopped and raised its head. I could see the smoky mist of the falls in the background, some pink impatiens flowers in the grass, and this majestic animal looking almost heraldic with its yellow mane.

I fired off thirteen frames in quick succession. The swirling air currents in the crater must have taken my scent to the serow, for suddenly it bolted, leaping the river again and blundering up the slope, back the way it had come. 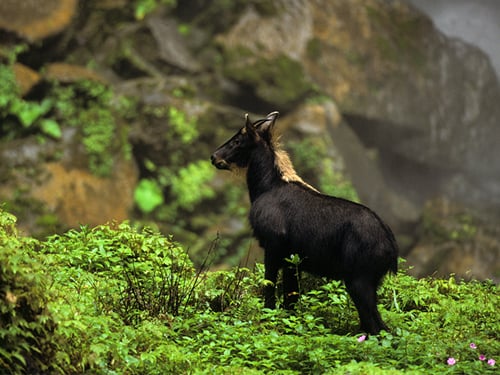 The little tears of frustration that had tried to squeeze out earlier transformed themselves into tears of joy. I had done what wildlife photographers were supposed to do – made the most of a lucky moment and got the shot.