Back from the brink and beyond – can we resurrect a lost species?

Deep in the rainforests of Queensland, there once lived a species of frog whose females swallowed their eggs whole after fertilisation, using the stomach as an incubation chamber.

When the eggs hatched, the mother’s stomach swelled up so much that her lungs collapsed and she started breathing through her skin. She then gave birth through ‘propulsive vomiting’, spewing froglets out onto the forest floor.

This gastric brooding frog was discovered in 1973 but just six years later – before its bizarre behaviour could be understood further – the species disappeared from the wild, probably due to the dreaded chytrid fungus disease.

But Professor Michael Archer, a palaeontologist from the University of New South Wales, wants to bring this species back from the dead. His Lazarus Project is one of many around the world looking at bringing extinct species back to life, an idea called de-extinction.

The idea evokes scenes from Jurassic Park, but could it really work?

Once a species goes extinct, all that is usually left behind is a pile of bones or fossils. But what if a species was lost only recently? In such a case, there is a chance that a scientist somewhere may still have a sample specimen, preserved in a way that makes it suitable for future research.

This is what happened with the gastric brooding frog: Professor Mike Tyler from the University of Adelaide was studying the species before it disappeared, so when Archer started thinking about bringing the frog back, he called Tyler who browsed through his lab’s deep freezer and came out with a jar of gastric brooding frog specimens, preserved in ethanol.

All living cells have a nucleus, which holds the genetic material (the DNA). Archer and his research group used a cloning technique to bring the preserved nucleus back to life by using fresh eggs from the great barred frog (a distant relative of the gastric brooding frog).

After repeated trials over five years, Archer finally saw it. Crouched over a microscope, he watched as a modified egg developed into early stage embryos. Although none survived beyond a few days, all of them contained genetic material from the gastric brooding frog.

Prof. Michael Archer discusses his work with the gastric brooding frog and the thylacine. Video courtesy of TED Conferences

“We are watching Lazarus arise from the dead…step by miraculous step,” he said at the TEDx DeExtinction event in Washington DC last year.

This was Archer’s first public speech about his work, and he also talked about bringing back the thylacine (Tasmanian tiger). Other researchers at the event spoke about a variety of extinct creatures, from the woolly mammoth to the passenger pigeon and the Pyrenean ibex.

The verdict was that it was now possible to bring back at least some of the species that we have lost. De-extinction has now moved beyond the realms of science fiction.

Are we playing God?

All this raises ethical questions though. Now that we have a tentative recipe, do we want a Tyrannosaurus rex running amok in our backyards?

You may be relieved (or perhaps disappointed) to learn that Jurassic Park is not likely to become a reality: it turns out that mosquitoes trapped in amber are not the best agents to carry genetic material. More importantly, dinosaurs have been gone for too long – DNA cannot stay unspoiled for so long.

But why do we need to bother at all? Isn’t it better to leave things as they are, rather than play God by bringing back something that disappeared decades or centuries ago?

Archer argues that by exterminating species, we have already played God. As he said at the TEDx event, “If it is clear that we exterminated this species, I think we not only have a moral obligation to see what we can do about it, but I think we’ve got a moral imperative to do something, if we can.”

The same argument may also apply to endangered species, which could benefit from the cloning and genetic engineering techniques being pioneered for de-extinction.

For example, the Mauritius kestrel was down to seven individuals when conservation efforts began to turn things around. Numbers have gradually risen to a few hundred, but since they all stem from just seven ancestors, they do not have much genetic variation and so have little ability to adapt to environmental change or fight new diseases.

De-extinction technologies could have a role to play here, by allowing us to increase the gene pool diversity.

Are we curing the symptoms not the cause?

Another concern is that the idea may backfire. Animals and plants went extinct (or are endangered now) for a reason, and more often than not humans are largely responsible.

Using genetic engineering to bring back an extinct species (or increase numbers of an endangered one) does not address the underlying cause of the extinction or decline, so what do we do once we have resurrected a species? Keep it in a zoo? Reintroduce it into its natural habitat? 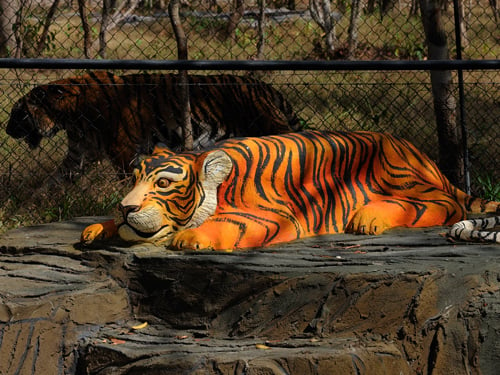 Could this be the future? A concrete tiger and its wild shadow. Credit: Jeremy Holden.

And – with the notion that smart laboratory science can save animals from going extinct – could we inadvertently reduce the impetus for addressing these underlying causes? In other words, will conservation campaigns work without the “biodiversity loss is forever” tagline?

These are questions that came up a lot at the de-extinction meeting, and conservation biologists advocated for keeping the ecosystem in mind (as much as the species themselves) when working to protect our natural world.

Cloning itself is highly contentious, with serious questions raised about the technology, its applications, and what we plan to do with it.

But regardless of all the possible risks and ethical questions, one thing that de-extinction ideas can give us is hope and possibility.

In the words of Helen Keller (an American author, speaker and campaigner who lost her hearing and eyesight at a young age), “Optimism is the faith that leads to achievement; nothing can be done without hope.”

Main photo taken by Graham Renshaw and extracted from his 1938 article on the thylacine, in Fauna & Flora International’s journal.