An eye on the ground

As a child in England, wandering through the countryside, bird watching, turning over stones in search of creepy crawlies, or examining a flower seen for the first time, I could be certain that all I needed to give a name to this new discovery was the right field guide. If I didn’t own the book myself I could probably find it in the school library.

A careful search could identify that this particular caterpillar, for instance, was the larva of a cinnabar moth, that it feeds on ragwort and that its aposematic colouration (bright yellow with black bars) signifies it is distasteful if not actually poisonous. Not only was an accurate identification at hand, but also some ecological information.

Now, as a photographer working in some of the more unexplored rainforest areas, it is not always so easy to put a name to a face.

The need to know what I have photographed entails more than curiosity. Following Fauna & Flora International’s (FFI) precept of ‘sound science’ I want to make sure my images bear the right scientific nametag so that they can be of maximum use.

I can be fairly confident in identifying birds and mammals as the world is pretty much covered now by a host of excellent field guides. The identity of some of the stranger things, however, can take some serious sleuthing to uncover.

The diversity of the world’s tropical rainforests is so great that even rainforest specialists usually have their own very narrow field of interest. To put a name to the strange leaf-mimicking insect I have just found in Borneo, for example, might first entail a search for a human name. Who is the world expert on Bornean orthopterans? 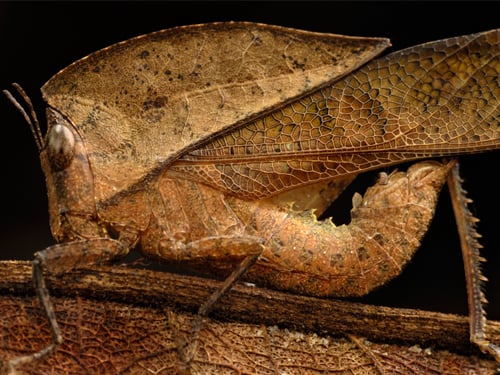 Armed with that knowledge, a friendly email usually elicits an enthusiastic reply: many specialists spend too much time in the university lab and are more than happy to get news from the field. Over the years I have accrued a wild array of specialist contacts to help put the correct tags on my photographs.

Sometimes it happens that I don’t have an expert to turn to and I resort to Google. The Google search can be as intricate and hazardous as a field trip to the jungle, but also evoke that same sense of exploration, too.

What in the world is that?

On a recent field trip to the Cardamom Mountains in Cambodia with forest specialist and mycologist (fungus expert) Dr. Joel Jurgens, I discovered something strange. Lying in the leaf litter was what looked like the disgorged eye of a large mammal – a spherical lump of greyish jelly containing a pale, blind globe. 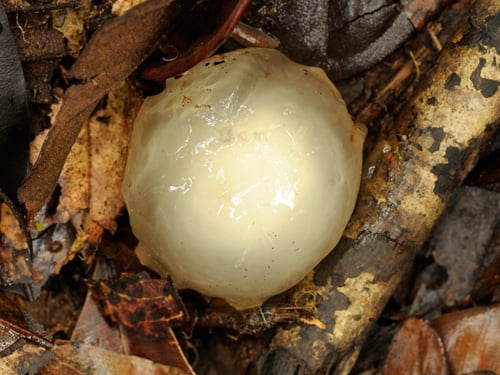 The buffalo eye fungus stares up from the forest floor. Credit: Jeremy Holden/FFI.

It could easily have been a skinned fruit, but I suspected it was an unusual fungus and I called Joel over to take a look. One of our Khmer rangers glanced down and said, “It’s a mushroom and you can eat it. We call it p’nairk grabai – buffalo’s eye.”

I looked to Joel for clarification but he shook his head. “I have spent 16 years and worked from pole to pole – and most places in between – looking at fungus, and I have never seen anything like this,” he said.

Searching around for more, we were lucky enough to find one that had emerged from its jelly cocoon. It was, as we had both suspected, a type of puffball. The jelly covering probably served as a protection against snails and beetles that might otherwise have damaged the fruiting body before it was fully ripe. 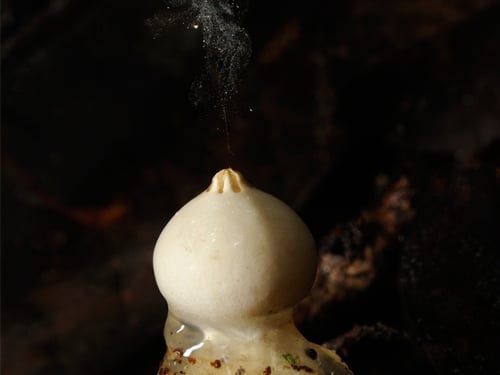 When a drop of water hits Calostoma a smoky puff of spores is shot into the air. Credit: Jeremy Holden/FFI.

I knew that many of these puffballs spread their spores in smoky puffs when the spherical fruit body is disturbed – often by a drop of falling water. I tried this and it worked. So we knew we had a puffball, but what was its name?

Searching for the right words

Back in town, the first thing both of us did was a Google search. ‘Jelly Puffball’ seemed a good place to start. Google images came up with a variety of stuff, some of which wouldn’t have passed a safe search filter, but no buffalo’s eye fungus. I tried that name next. Nothing.

If Google fails I go to Flickr. With millions of photographers across the world taking billions of pictures there is a good chance that someone else will have already posted an image on Flickr. They might be as clueless as me as to what it is, but I have managed to clear up many species mysteries this way.

I can’t remember what combination of words eventually produced an image from a North American wood that bore some resemblance to our fungus – Calostoma. Meanwhile, Joel had scored with ‘gelatinous puffball’ and also got Calostoma. Googling Calostoma produced an array of images of similar species, but nothing to quite match our buffalo’s eye.

But Calostoma was good enough for me. Often in the tropics a genus or family name is as far as one can go. It is not unusual to find something that hasn’t even been named yet, or even seen by another scientist, and doesn’t appear on the mighty Internet or in any field guide. This is another reason why trying to identify what we find is important – it could be something rare, new, or in one case, something that was formerly thought to no longer exist. 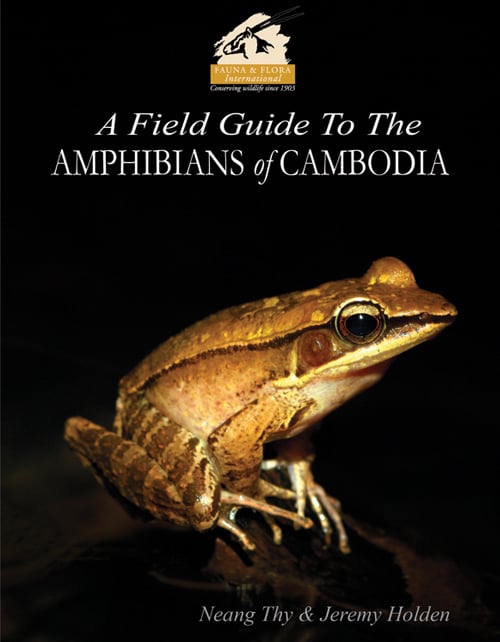 In many of the exotic places that FFI works there are no field guides. In Cambodia, our researchers discovered so many new species of amphibians we decided to produce our own. Credit: Jeremy Holden/FFI

Rather than being simply an act of pedantry, learning as much as we can about the places in which we work helps us to better understand and protect them. A diminutive frog may prove to be a new species, an unidentified orchid a rare endemic.

In this case ignorance is not bliss – knowing these things could be the key to building a programme to protect them.