During the Equity Capital Markets fundraising dinner for FFI in Sydney last year I successfully bid by telephone for a trip for two to Rwanda to see the mountain gorillas. I took the opportunity to also visit the Ol Pejeta Conservancy in Kenya to see the northern white rhinos, and to the Masai Mara, also in Kenya, to see the wildebeest migration.

Arriving in Rwanda was an eye opener. Seventeen years after the genocide, Rwanda was rebuilding itself! Most Rwandans we met spoke openly about the genocide, which we found a bit disconcerting at first but we realised this was an important part of their healing process. The airport was modern and the drive to the city revealed a beautiful, clean and green landscape. The President has banned plastic bags and had instituted a monthly clean-up day, in which everyone in the country participates. The result is a very clean country, and a people seemingly united and proud in their achievement. 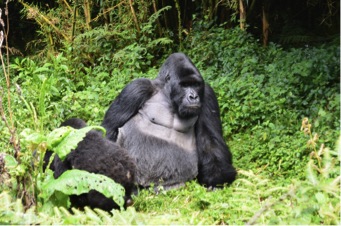 The next morning we drove to the Volcanoes National Park to meet our tour group and guide. The permits are strictly limited with only eight groups of eight visitors allowed to see the gorillas each day. Our guide was Patience, who has been guiding visitors to see the gorillas for 18 years. He has seen many of the gorillas from birth, so they recognise him and are not threatened by his presence.

We climbed for 2 1/2 hours through thick tropical vegetation to 2500 metres, when some trackers joined us to tell us a gorilla family were nearby. The family was headed by Ageyshi, meaning Special, a silverback they nicknamed Casanova due to his proclivity for females. We came into a clearing to see 2-3 females and their babies. Ageyshi, all 400 pounds of him, then strutted in. He stopped when he saw our party and then ran to within a metre of us. Needing to assert his domination of the territory, he failed to observe the seven metre distance rule previously drummed into us! He snorted and turned his back on us as if to say “got the message?” Following them for over an hour, we saw almost all of them. Eating, wrestling, kissing and, when they were happy, beating their chests. It was so special to see them in their own environment.

The next day we flew to Nanyuki in central Kenya, right on the Equator and at 6,800 feet!  We were met by our guide Francis, a gentle and intelligent Masai man who told us about his two wives and four children back in the Mara.

Francis took us to Ol Pejeta Conservancy, a private game reserve of 90,000 acres. Ol Pejeta has a colourful history. It was owned by Adnan Khashoggi, the notorious arms dealer, who ran cattle and entertained visitors in his guesthouse. Two bedrooms had beds that were 12’ x 12’ and each had a platform that lowered the female entertainment down to the beds! Khashoggi lost the ranch to Tiny Rowland of Lonhro in a poker game. Lonhro continued ranching on the property, until it ran in financial difficulty and put it up for sale. FFI saw the opportunity to rescue the ranch as it had some of the richest wildlife populations in Africa, including a large population of black rhinos. FFI raised the money to buy the ranch with a donation from an American billionaire.

We drove into the gates of Ol Pejeta and within minutes saw three black rhino, quite a treat! Over the next few days we saw an enormous number of animals, including the big five (buffalo, lion, cheetah, leopard, elephant) and four of the ugly five (warthog, wildebeest, hyena and vulture).

On our last day in Ol Pejeta we visited the Morani Centre, where we finally met the four northern white rhinos:  Nye, Fatu, Sudan and Suni and their keeper, Mohammed. Mohammed featured in Last Chance to See, a film produced by the BBC in which Stephen Fry recorded the translocation of the rhinos from the freezing Czech zoo to tropical Kenya.

Nye has mated with Fatu, and Mohammed was eagerly waiting for the results of a DNA test to see if a pregnancy has resulted. While we watched Nye was trying for Fatu’s mother Suni. Unimpressed with his inconstancy or perhaps protecting her mother, whose cycle has not yet returned to normal, Fatu warned him off.

The enclosure is a massive affair, with inner and outer fences, watch towers and armed guards constantly patrolling to prevent poachers getting to the rhinos. Ol Pejeta takes the preservation of these endangered species very seriously, and the cost of setting up and running this is enormous.

Our two weeks in Rwanda and Kenya were an absolutely wonderful experience. We both loved seeing the gorillas, rhinos and the rest of the animals in their natural habitat, meeting some fascinating locals and learning about their culture, and taking in the beauty of the African landscape. We will be back to Africa as soon as we can!