In this age where wasting energy now ranks as a moral sin, using helicopters or fixed-wing planes to survey might seem reprehensible. But sometimes an aerial perspective is essential for us to know what is going on, where forest crime is happening and where we need to target.

As a photographer, I make it my business to get on as many of these flights as possible, because as well as allowing essential monitoring, overflights offer a valuable opportunity to photograph our project sites in a unique way. In tropical forest it can be very difficult to get any representative photographs of the habitat. Forest pictures are notoriously difficult to make, and good clear viewpoints impossible to find. The dramatic effects of deforestation and land clearance are also much more easily depicted in aerial photographs.

Photography is usually only the byproduct of an overflight. The primary purposes for this activity vary from project to project. Searching out illegal activities, locating areas for field surveys, locating suitable habitat where megafauna might occur, or assessing the effectiveness of project work – these are some of the reasons why overflights are so essential. 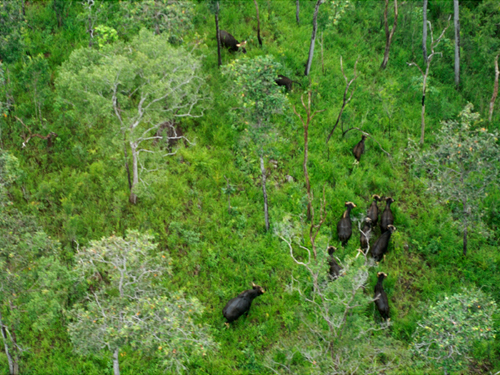 In 2008 in Cambodia we used helicopters, funded by Australia’s Federal police, to locate stills processing safrole oil from M’reah Proh trees. The oil comes from the roots of a tree found in the Cardamom Mountains and contains a phenol used in the production of the drug ecstasy. To distil this oil, the producers created huge stills in the rain forest. The environmental impact of these sites was immense: not only were the M’reah Proh trees cut, but tens of neighbouring trees were also felled to fuel the stills. The poisonous run off from this process then went straight into the nearby watercourses, causing widespread pollution. The remoteness of these still sites, and the sheer number of them, meant that overflights were the most effective way to find them – the tell-tale smoke from the stills was easy to spot from the air. We could then radio the waypoints to a ground team that quickly mobilised and raided the site. 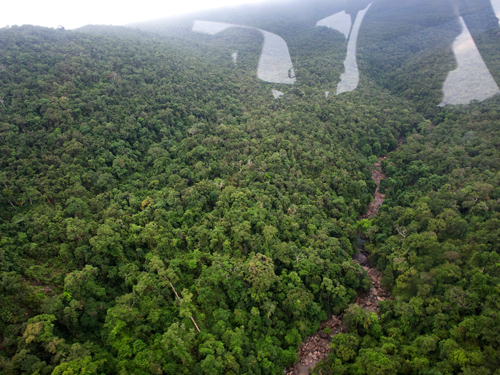 In Sumatra’s Kerinci Seblat National Park, where FFI has both tiger monitoring and protection projects, there is certainly no budget for overflights. But as with the Cardamom Mountains the need is there. Habitat encroachment is widespread and in locations that are remote and difficult to access. Furthermore, the park is huge and it can take days to circumnavigate and get access to some areas. One option is to use some of the higher points to view the surrounding forest. Gunung Kerinci, the mighty volcano at the park’s heart is also the highest point in Sumatra. The cone soars over 3,800 metres, way beyond the tree line. This means the cone is exposed and offers wonderful panoramas of large areas of the national park.

Over Christmas I decided to make the climb to the summit. There were a number of reasons for this. The view, if the weather allows, gives an opportunity to assess the deforestation that is occurring around the volcano. It also provides an excellent viewpoint on to Danau Sakti and the Gunung Tujuh massif where we were about to start a new camera-trapping programme to monitor mammal populations in the high altitude montane forests. I also needed to kill some time while my Indonesian counterpart Nata recovered from a bout of typhoid. And besides, it was Christmas and I needed to do something memorable.

I began the climb at midnight, hoping that I could reach the tree line by dawn, that it wouldn’t rain, or that I wouldn’t run into any tigers along the path. Miraculously I emerged from the final moss forest, dry and unmolested by large cats, just as the sun was spilling over the mountains to the east. The sky above was occluded by high cloud, but the valley was free of cloud: I could see the forest and the termite-nibbles of the encroaching farms clearly. The farmland had crept up the slopes, and one of the smaller adjacent volcanic cones, complete with its own mirror lake, Danau Belibis, was now completely severed from the remaining forest – an island that would now start on the inevitable path of ecosystem decay. 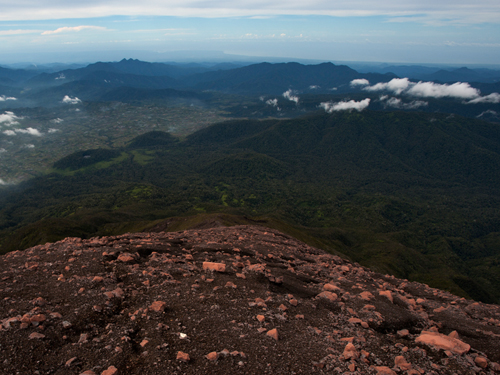 More encouraging was the view across the valley to the Gunung Tujuh massif, whose slopes were still heavily forested. From this vantage point the lake sits brimming in the huge crater, a precarious weight of water above the surrounding villages. I could understand why there is a long-held fear that one day the mountain wall will crack and the lake will empty itself onto the hapless villagers. I could also imagine how huge this cone must have once been. But trying to imagine the blast that turned it into a cracked eggshell was beyond me. 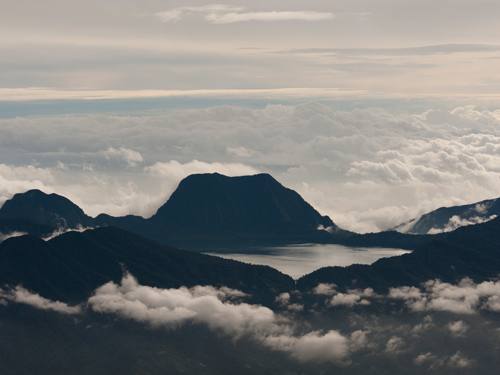 After taking a couple of hundred photographs, climbing briefly to the summit, getting thoroughly sunburned and half-choked by the sulphur dioxide spewing from the crater, I started back down. I was reduced to a limping, creeping progress by the time I left the forest at 7.30 that evening. It had been a memorable Christmas. Rather than receive socks, I had worn a pair out, and had developed a blister the size of a florin on my big toe. But it was worth it. My Christmas present had been the clear weather, the chance to get an aerial perspective, and some useful photographs. After 36 hours without sleep and 24 without food I could perhaps also virtuously claim to be one of the few Englishmen that had actually lost weight on Christmas day.