A race against the odds 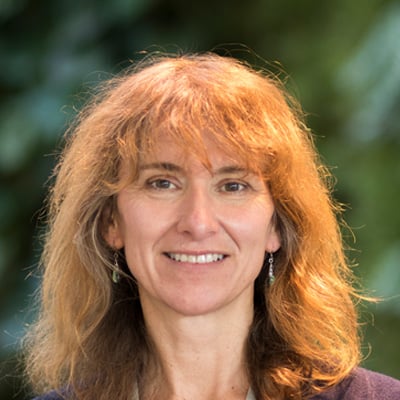 This greeting rarely receives a warm reception in any country. In Antigua in 1995, my words elicited both shudders of revulsion and hoots of laughter. “Snakes, what snakes? There are no snakes in Antigua. The mongoose ate them all.”

They had a point. Mongooses were imported to the West Indies from India more than a hundred years ago to control an explosion of rats on the sugarcane plantations. These rats were also foreign invaders, carried from across the world as stowaways on sailing ships.

I once saw the original order for “one mongoose and seven others” in the copperplate handwriting of a beleaguered plantation owner in the 1890s. He must have been wrestling for hours with the problem of whether the correct plural form is mongooses or mongeese, before hitting upon this neat solution.

For the mongooses (or mongeese), the Caribbean was paradise. They had little impact on the rodent plague, because mongooses hunt during the day, whereas rats are active by night. Instead, the mongooses turned their eyes and ears to much easier prey. They multiplied rapidly on a rich diet of native reptiles and ground-nesting birds.

The docile island snakes stood little chance against Riki-Tiki-Tavi. The Antiguan racers had evolved over millions of years without any mammal predators and had no means of protecting themselves. Before the mongooses arrived, these snakes were abundant. Samuel Smith, an Antiguan labourer born in the 1870s, wrote, “I am one of the few people still around today that ever saw snakes in Antigua. Plenty snakes was here for sure.” But by 1936, the Antiguan racer was declared extinct; its passing marked with only a few lines in a little-known scientific journal. 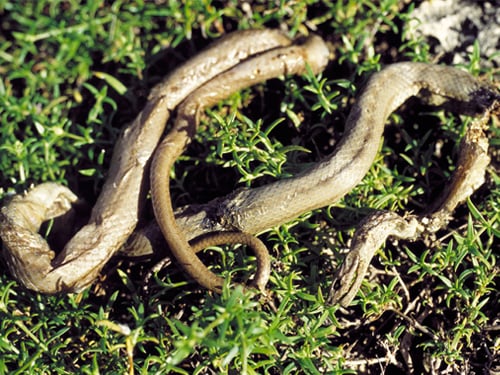 Miraculously, a handful of Antiguan racers survived on Great Bird Island, an eight-hectare offshore island that had remained mongoose-free. A young Antiguan forester, Kevel Lindsay, spotted one of the snakes on a visit to Great Bird, and instead of reaching for his machete, was concerned for their welfare and sought advice from Fauna & Flora International. 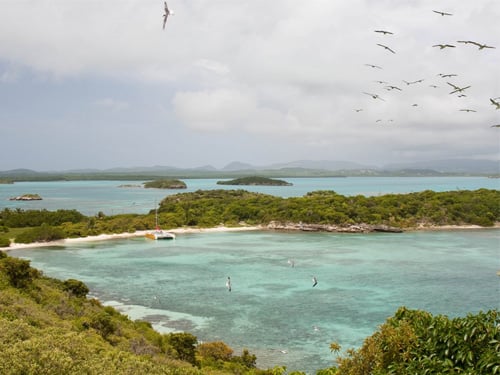 So in 1995, I was asked to find out how many racers remained, how they lived, and whether they needed any sort of assistance. Great Bird, a 20-minute ride in a fishing boat from the Antiguan mainland, was to become my desert island home for three months as I tried to find some answers to these questions.

Within hours of landing on the enchantingly pretty island, I was holding my first Antiguan racer. Silky smooth and silvery-grey, with diamond-shaped markings, the colour of milky coffee, she draped herself elegantly across my hands. 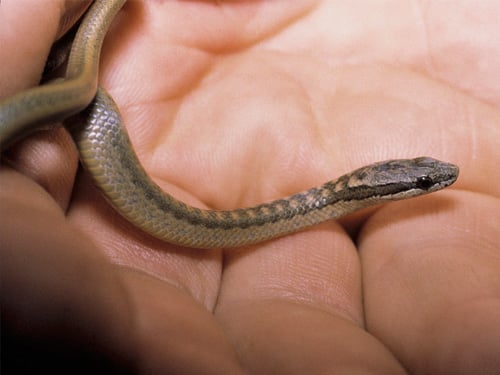 There was something odd. Snakes, like most wild animals, typically struggle and even bite in fear when they are caught. This one was completely relaxed, casually looking around with large, round golden eyes, as though nothing had happened. I wondered whether I would maintain such composure if I were grabbed and hoisted into the air by an ape 400 times my body weight.

“So, snake, are you worth all this fuss?” I remember saying these exact words out loud. Silly really, as she could neither hear me nor reply. Fresh from the breathtaking thrills of working with king cobras, crocodiles and giant lizards in Asia, the Antiguan racer was neither the most beautiful nor the most exciting reptile I had met. But there was something about her calm, confident demeanour that said the racer was something special.

Two months later, sun-burned and scarred from crawling around the thorny, rocky islet for ten hours a day, I was even more in love with the Antiguan racers and had learned some unexpected things about them. I discovered that the males looked very different to females, tending to be a rich chocolate brown with creamy diamond markings. I learned they entrap lizards by hiding in ambush, cunningly disguising their bodies under a blanket of leaves. I watched females threaten one another, with arched necks and inflated throats, before silently calling a truce and going their separate ways. 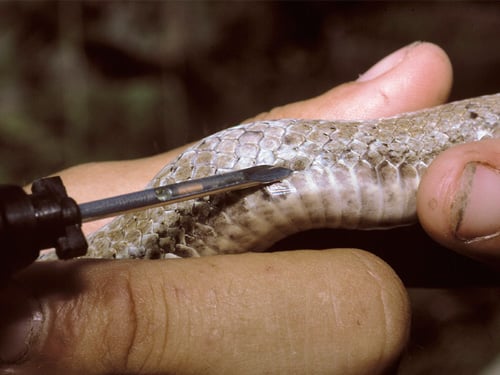 More than anything else, I revelled in the fact that these snakes seemed so unbothered by my close presence, even when I implanted microchips and radio transmitters and followed them around all day. Whereas ‘normal’ snakes can be so traumatized by being caught that they immediately flee and hide for days, I would release a racer and watch it take a leisurely drink from a rain puddle before ambling off in search of good spot to ambush a meal.

What a treat for a zoologist; getting to know a group of animals intimately without stressing them or disrupting their normal routines. 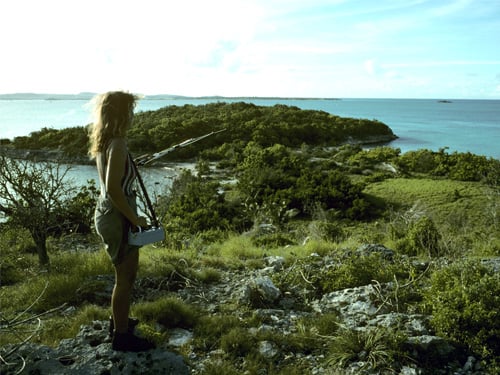 But all was not well in paradise. Even though there were no mongooses on Great Bird, my research revealed that only 50 racers remained on the islet, making this the rarest known snake in the world.

Moreover, more than half of them had been seriously mutilated by rat bites. Some of the unfortunate males had even been castrated by having their tails gnawed through.

Demise of the rats

It had not taken me long to discover that Great Bird Island was overrun with thousands of black rats: the same Asiatic species that had plagued Antigua’s plantations. My first couple of nights were memorably spent sitting bolt upright inside my tent, kicking off the rats whose dark shadows I could see and hear trying to gnaw their way through the thin canvas. By the third night, as exhaustion took over and I fell asleep, the rats broke in and ran amok through my food supplies. Silly me for thinking these would be safer inside my tent.

I could live with the rats stripping off all the labels on my canned food until I had no clue what I would be eating for dinner. I could begrudgingly admire them for drinking the shampoo and eating the soap. I could even tolerate them brazenly galloping over my sleeping bag and tugging my hair in the night. But attacking the poor racers was too much. I wondered how the rest of the world would react to news that the snakes were being hunted by rodents. Shouldn’t that be the other way round?

Fortunately, my colleague Mark Day took this warning seriously, and together with Kevel, his Forestry colleagues on Antigua and Dr Alan Buckle, a rat control expert from the Syngenta company, we hatched a plan to get rid of the rats. 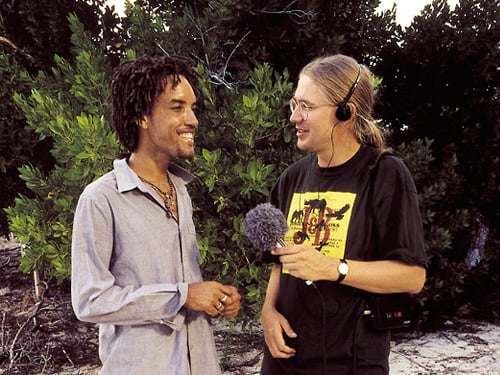 First, we cut narrow, parallel pathways across the island, exactly 10 metres apart. Next, we placed rodenticide at 10 metre intervals along the trails, and replenished it daily. Alan warned us that rats are wary of new foods, and become especially suspicious when they see other rats dying, so we chose a slow-acting brodifacoum-based rodenticide that would lull them into a false sense of security.

By the time the first rats died, the whole colony had accepted the poison bait. Within two weeks of starting this operation, not a single rat remained. Unfortunately for the rats, there was no other option to ensure the survival of the incredibly rare Antiguan Racer snake. 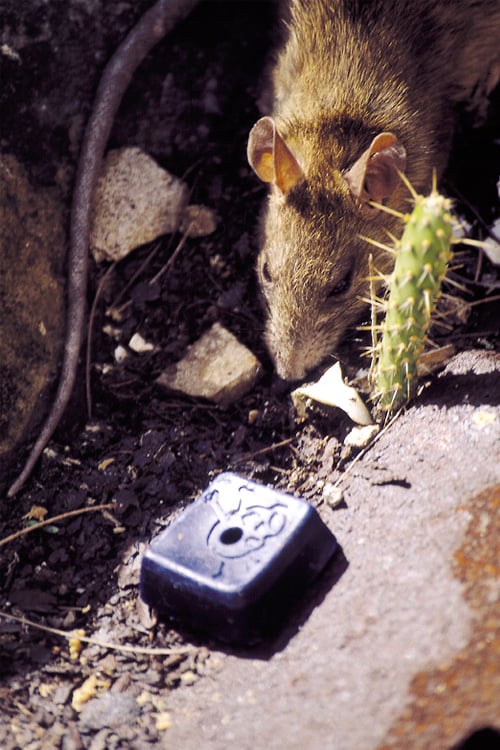 Killing small furry animals is never a pleasure, and no one could forget the stench of thousands of decomposing corpses, which hung over Great Bird Island for several days afterwards. Yet it felt absolutely right to undo a threat that people – my own fellow countrymen from England – had inflicted on Antigua’s wildlife. Within two years, the racer population had more than doubled to over one hundred. We were on the right track!

Not surprisingly, removing the rats also benefitted other wildlife on the island, and we witnessed a phenomenal increase in the numbers of birds and marine turtles that nest here. Great Bird Island is now living up to its name once more, its air filled with the cries and whirring wings of terns, noddies, tropicbirds, pelicans, boobies, gulls, pigeons, doves and whistling ducks. Their eggs and chicks are now safe from predatory rats.

Taking back the islands

Since that first operation in 1995, we have gone on to clear rats and mongooses from more than a dozen small islands around Antigua using much the same method. This has allowed the Antiguan racers to repopulate a further three islands and their total population reached nearly 900 by the end of 2011! They are healthier, living longer and breeding faster than ever before.

Antiguan racers are still registered as Critically Endangered and are still very rare by any measure, but having been given a chance, they are slithering away from the brink of extinction as fast as they possibly can.

While tackling the rats has been the key to getting the racer back on its feet, so to speak, another major challenge was winning over the support of a sceptical, snake-fearing public. Most Antiguans had never seen a snake and their knowledge of these reptiles went little further than the notorious serpent in the Bible.

Here, I take my hat off to the members of the Environmental Awareness Group on Antigua, who have tirelessly bombarded the local media with articles about the racers, circulated thousands of racer postcards, posters, badges and other paraphernalia, and took class after class of excited schoolchildren to meet the snakes, and see for themselves how gentle and amazing they are. 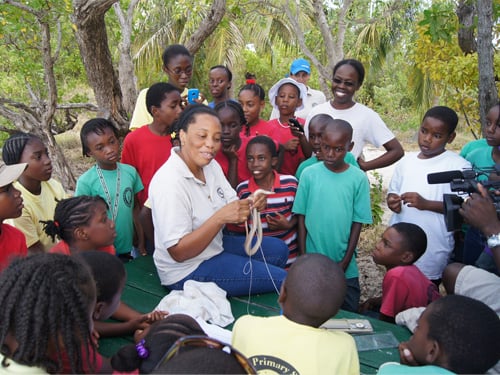 As those first children have now grown up and had kids of their own, the Antiguan racer has become widely known and something of a celebrity. It is Antigua’s very own “friendly snake” – harmless, rare and unlike any other. Local guides now take tourists out to see the racers, while local schoolteachers and students study the racers for their science projects.

On my last trip to Antigua, I took a ride with a taxi driver I hadn’t met before. I asked him what there was to see.

“I don’t like snakes,” he said, “but Antiguan racers are nice. Don’t worry, they don’t bite. They are the rarest snake in the world, right here in Antigua. You should go and see them.”

Learn more about the Saint Lucia racer, which was recently named ‘the world’s rarest snake’.