In March 2013, Ol Pejeta Conservancy (Fauna & Flora International’s partner in Kenya) reported the sad loss of a 22 year-old female black rhinoceros, who was slaughtered by poachers for her horns.

Arriving at the scene, Ol Pejeta rangers found a male calf – just three weeks old – calling for its mother and clinging to her body. Distressed but thankfully unharmed, the calf was flown to the Lewa Wildlife Conservancy the same day, where it is being cared for along with another young rhino.

In a tale that demonstrates both the brutality and the benevolence of humankind, Ol Pejeta now reports that this calf’s fortunes have turned around thanks to the efforts of staff and the generosity of one donor who has stepped forward to support the care of the calf, who has been named Hope. 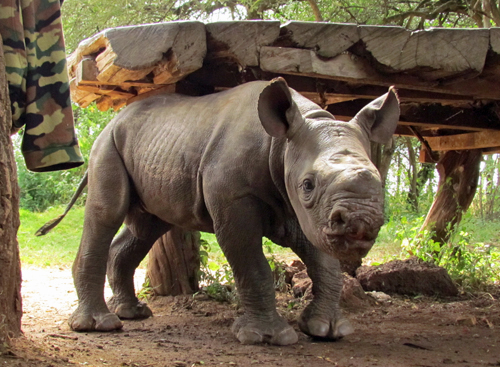 Although the first few days were difficult for the young calf, who kept calling for his mother, he has now settled in nicely on Lewa and is making friends with his caregivers.

Sadly, the hefty price paid for rhino horn means that incidents like this one are becoming more and more frequent, with conservationists warning that Africa’s rhinos are facing the worst poaching crisis in decades.

According to TRAFFIC, the recent upsurge in rhino poaching is closely linked to an increased demand for rhino horn in Asia – particularly Vietnam where it carries prestige as a “luxury item, post-partying cleanser and purported cancer cure.”

To make matters worse, international crime syndicates are cashing in on the illegal killing of rhinos and giving poachers access to sophisticated equipment.

In response to the incident, Ol Pejeta Conservancy has redoubled its efforts to protect its resident rhinos. “Though this is the first incident in over a year, we are nonetheless working on increasing our security measures by working with government agencies and international partners to deploy aerial drones to help protect our wildlife,” said Richard Vigne, Ol Pejeta’s CEO.

Listed as Critically Endangered by the IUCN, the global black rhino population has declined by an estimated 98% since 1960, with only around 5,055 remaining today.

Though the situation remains grave, efforts by conservation organisations such as Ol Pejeta (which is the largest black rhino sanctuary in East Africa) do provide a little hope for the future of Africa’s rhinos.

To find out more about this story, read the original report by Ol Pejeta Conservancy (WARNING: story contains upsetting images of poached rhino which are not suitable for sensitive readers).