Yesterday afternoon after finishing a crocodile training session with the boys from Australia Zoo at Phnom Tamao Wildlife Rescue Centre, I was schooled in the world of social networking. While Briano and Toby were demonstrating the way crocodiles are captured and handled at Australia Zoo for my Cambodian colleagues, Bruce was filming, taking pictures and uploading images onto the internet with his iPhone.

Suffice to say, I am now in awe of how the internet can be used to spread information and how many people out there are interested in what we do on a daily basis as conservationists working in remote parts of the world. 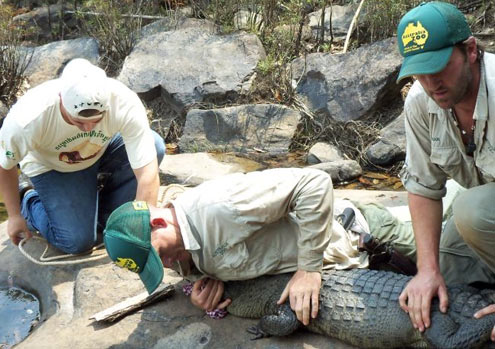 So here I am, lying in bed under a mosquito net in the middle of the Cardamom Mountains in Southwest Cambodia, writing my first blog; about a very important crocodile rescue mission!

Let me begin with a little background. The Siamese crocodile was once found throughout Southeast Asia, but over the past 100 years they’ve been hunted to near extinction for their soft skins. In 1992, they were declared “extinct in the wild” by the IUCN. 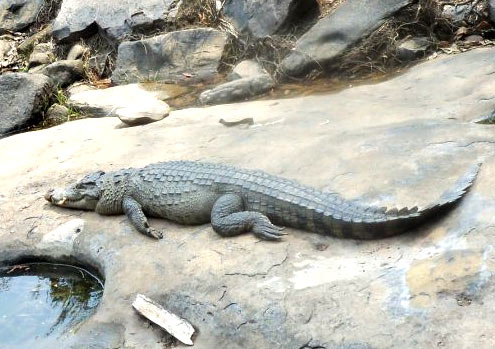 It was during these expeditions that the Siamese crocodile was rediscovered. Shortly afterwards the Cambodian Crocodile Conservation Project was jointly formed by FFI and the Forestry Administration conducting surveys throughout the country and implementing conservation at three critical breeding sites. It is believed only 250 remain in the wild.

After years we have achieved some successes: local villages are actively engaged, sanctuaries have been created, awareness has been raised, and we have been able to stabilize these populations.

However, a new threat has emerged. After years of impoverishment, Cambodia is growing economically and in order to sustain this growth, the government has determined it must enhance its energy sector through the development of hydro electricity.

As a result of this, the government has been conducting studies on rivers throughout the country and has been offering economic incentives for foreign investors to build hydro dams. In total, some 14 sites are now being considered for development.

One such site is a river called Stung Atay which flows through Pursat and Koh Kong Provinces in Southwest Cambodia. Construction began in 2008-09 and will consist of two dams, one generation station and hundreds of kilometers of power line.

Over 4000 hectares of rainforest will be flooded.

There is a 750m section of river called Anlong L’Ang just 150m downstream from the second dam which is home to 15 Siamese crocodiles; currently these animals are caught between construction sites and will perish if they remain.

Over the past two years, my team and I have been considering how to deal with this issue and save these animals. The logistics of managing such a rescue seemed overwhelming; the actual site is extremely remote, the section of river is up to 6m deep in places and the nearest river to safely move them to is more than 20km away.

It was during this planning stage that I was introduced to Australia Zoo and their Wildlife Rescue Unit. I knew the work of the late Steve Irwin, but I wasn’t aware that his team was still working hard to rescue crocodiles around the world. Briano Coulter – a protégé of Steve and probably one of the best crocodile hunters in the world – and his team now carrying on his work. 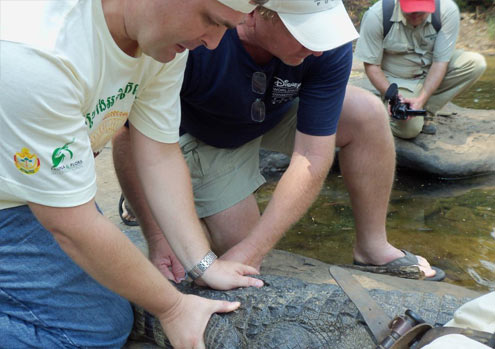 After discussing the situation and having Briano visit us in Cambodia, he was able to get the necessary equipment together and assemble his team (Toby and Bruce) to come work with my team Han, Leng, Piseth and the crocodile keepers at the Phnom Tamao Wildlife Rescue Centre.

After some training on crocodile capture methods we travelled for 10 hours later up to the village of O’Som, literally in the middle of the Cardamom Mountains. This village is only 15km away from the hydro dam construction site and trapped crocodiles we are trying to rescue.

Over the next two weeks we will be working together, building three traps and setting up crocodile nets at the rescue site. I’m hoping this will be a great learning experience for my Cambodian colleagues as well as for these salt of the earth Queensland boys where we’re exchanging not only professional knowledge, but also culture!

This brings me back to social networking and spreading the message of what we’re doing to save Siamese crocodiles. I plan to start blogging regularly, posting photos, utilizing Twitter (although I’m sure this is going to be the biggest challenge for me), so fans of FFI and crocodiles lovers around the world are in the know.

I’m definitely not Steve Irwin, but our interest and message with crocodiles and conservation are the same!