A fascinating find on the Scottish coastline

An unusual sighting on a beach in Loch Eishort on the Scottish island of Skye has caused a ripple of excitement among marine biologists in the area.

Amphioxus – otherwise known as a lancelet – has a nerve chord down its back and is believed to be one of the first animals to have evolved something resembling a backbone. Two of these strange creatures were discovered near Ord, Loch Eishort in Scotland by Eileen Armstrong and biologist James Merryweather, both from the South Skye Seas Initiative.

The lancelets were spotted at low-tide flipping about on the exposed maerl gravel. One stood on end and burrowed into the maerl, but the other remained still long enough to take photos before it was returned safely to the sea. 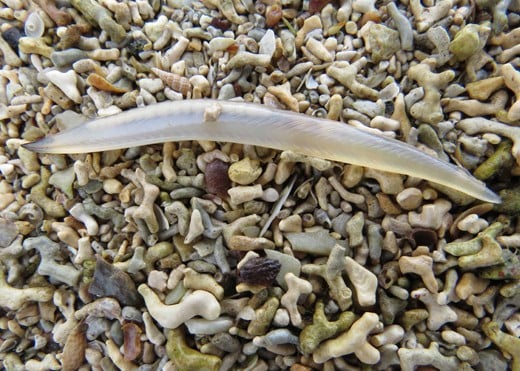 One of the lancelets (Branchiostoma lanceolatum) remained still long enough to take photos before it was returned safely to the sea. Credit: James Merryweather.

In the UK, lancelet adults grow up to 6 cm in length and live predominantly in offshore gravel beds, including maerl.

This amazing animal has a fascinating evolutionary history, resembling Cambrian fossils found in the ~500 million year old Burgess Shale of Canada. It is therefore no wonder that biology students study the lancelet as an example of a primitive chordate (an animal possessing a backbone).

There are limited records of the lancelet in Scotland, although this could be because it is easily overlooked and not always recognised. For example, at first glance it could be mistaken for a stranded lesser sand eel which are commonly seen during very low tides. The lancelet’s distribution and population is largely under-studied but it is thought that the species is quite rare.

Pink and curly, maerl looks rather like coral but is in fact a red seaweed with a hard, chalky structure. The beautiful white ‘coral’ beaches are actually made up of dead maerl fragments. Maerl grows in brittle and spikey beds that provide an important habitat for smaller plants and animals – particularly juveniles which use the branches to hide from predators. These beds are biodiverse habitats which are sadly endangered due to human activities such as dredging, harvesting as a lime fertiliser and pollution. 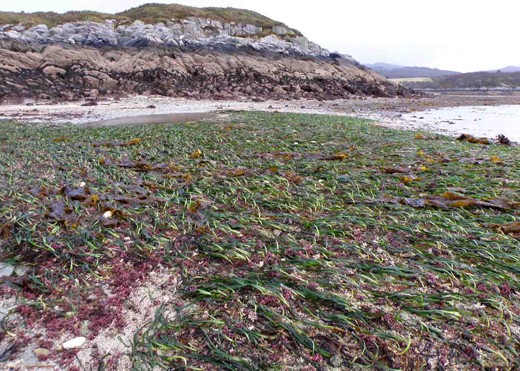 Being a slow grower, maerl beds take a long time to become established and when disturbed (by dredging, for example) they can take centuries to recover if at all. Maerl is also very sensitive to sedimentation, which stifles the algae and blocks out light, preventing photosynthesis.

South Skye and the coast of Lochalsh from Broadford to Plockton have some of the best and most biodiverse maerl beds in the region. In some places, the shallower areas occupied by maerl form a foundation for sea grass which is also rare and in need of protection.

Since June 2014, FFI has been working closely with coastal communities along Scotland’s coastline who are involved in protecting and managing their local seas. Monitoring the species and habitats which occur locally is an integral part of the work these communities do, as it helps make the case for locally-managed marine protected areas to safeguard vulnerable species and habitats such as maerl and seagrass beds, and the enigmatic and fascinating lancelet.