During the winter months, to avoid cold feet, I wear slippers to slop around our house in. They are neither new nor stylish but they are comfortable, and ably perform the task of keeping my feet warm. I thought of these on the last day of the 12th Student Conference on Conservation Science (SCCS) which closed on March 24th.  It was held, as ever, in the University of Cambridge’s Zoology Department and it was full to bursting with enthusiastic young conservation students from around the world and a smattering of crusty old conservationists and conservacrats.

At the coffee-break on the first morning, many of the participants – British and visitors from overseas alike –stand around in the large laboratory next to the lecture theatre looking at their shoes or at the fire notices. For many of the international guests this is their first time outside their home countries and it’s undeniably daunting to find oneself in a (cold) foreign country in a heaving multi-ethnic and multi-cultural mêlée.  However, by the time of the afternoon tea-break on the third and final day, after the party on the second night and general milling around together, the lab is a noisy hubbub of hundreds of conversations in dozens of languages, and the traditional cow bell has to be rung very loudly in order to get everyone’s attention to walk back into the lecture theatre for the poster and talk awards. 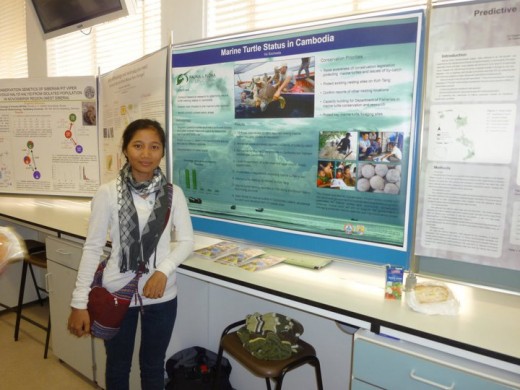 FFI was pleased to welcome Ms Socheata Ke from Cambodia to the SCCS. She is one of the graduates from the MSc course in conservation which FFI helped establish in 2005 at the Royal University of Phnom Penh. She has just started working with us on our marine sub-programme and it was a pleasure having her in our office the following week.

Of the very nearly 200 students attending this year, there were a remarkable 63 nationalities represented, with Oman and Estonia having their first-ever SCCS participants. All the visitors seem to have a story to tell of how they got to the SCCS.  I recall one year there was a young man from central Africa who had walked and bussed for three days in order to reach the airport to fly out of his country. Another one, Larry Liza, now an acclaimed environmental poet  in Kenya, ignored the pain of the arm he broke a few days before leaving Nairobi and told the Cambridge nurse that he would have his pain killing injections only when no talks were being given to avoid missing any opportunity to learn. There are also tales of how people managed financially; thanks to its sponsors the SCCS is able to give travel grants but only to a small proportion of those who want and need them. Instead people find work to earn them the fares and the costs of the conference, albeit subsidized by the generous sponsors. Others do a lot of legwork to find a private donor, while others do sponsored walks, runs or musical instrument playing to raise the funds. And of course their stories often reflect the gratitude they feel because with 600 students applying but fewer than 200 places there is a degree of luck too.

As in other years the bulk of the programme is filled with short student talks (consistently of outstanding high quality as the judges emphasized in the final session), but there are also well-polished and practical workshops on fund raising and the writing of papers which are hugely appreciated by the nearly 100% of the participants who attend them. No skiving off to go shopping around here!  Great and worthy people from the world of conservation come to give plenary addresses. There were also well over 100 posters on an enormous range of conservation topics, and I was not surprised to learn that the two poster judges had to spend 7 hours each reading and assessing them, filling out feedback sheets, and deciding which ones should get the awards. All the speakers also get written assessments and the best of the bunch also get prizes.

An aspect of this meeting which is especially charming is the low-budget, few frills approach. The Zoology Department staff and students volunteer to help with all the nuts and bolts of organizing the whole event. The first evening meal is pizza while standing up at the Who’s Who exhibition of the Cambridge Conservation Forum members. It would of course be possible to use larger rooms in a more swanky venue, but it is the squash around the food and drink in the laboratory, and on the hard seats in the lecture theatre, which actually make one feel that this is something really special of which to be part.

I’ve been really lucky in that I have only missed one of the twelve SCCSs and they have become a highlight of my year. The programme has remained pretty much unchanged over the years and although there are certainly things that could be added or moved around, the general conclusion is that “if it ain’t broke, don’t fix it”.  Instead it is rather like my old slippers; familiar, totally ‘fit for purpose’ and gives enormous pleasure.