A chilling tale of man and nature

In Sumatra recently I heard a strange story. It was presented to me by a tour guide as a true account of events that occurred a few miles away on the slopes of Indonesia’s tallest active volcano. Almost immediately I recognised a mythical quality to the tale, and could even relate it to similar folk tales from other parts of the world.

I have sprinkled the story slightly with the magical dust of fiction to give it a more polished form, but it was basically this…

A farmer had stolen land from the national park to make farmland for himself. The forest he cleared was on the slopes of a huge volcano. Because the volcanic soil there was rich and dark it made excellent farmland, almost as productive and dynamic as the rainforest that is felled to clear the land. 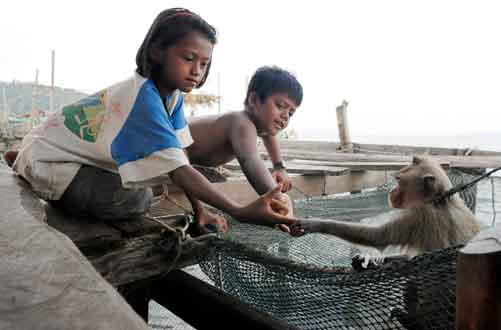 The forest was beautiful and diverse: many species of orchids hung from the trees, there were birds found nowhere else, scarlet toadstools grew on the forest floor, and there were many species of animals. Tigers passed through, tapirs foraged the night-time forest, and monkeys crashed through the canopy.

When the farmer cut the trees and cleared the ground he burned away the thick vegetation until only the rich dark earth remained, blacker now from the ash of fig trees and the leaves of orchids. The trees and the plants had to submit; the insects were burned or crawled away; the birds fled, and the tiger and tapir stopped passing through. From the canopy the monkeys watched the smoke rise. 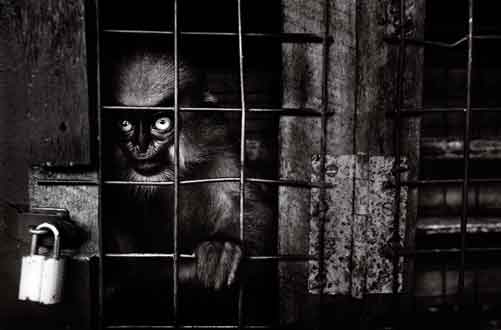 A year passed and the farmland was full of crops: potatoes in neat runnels, corn and chilli peppers, and a small tamarillo tree. Armed with a noisy spraying machine, the farmer rained down poisons to keep the insects away and any errant plants from returning. With no insects, the birds stopped coming. The ground was given over only to the farmer’s crops: it was as if the forest had never existed there.

But from the canopy nearby the monkeys could see the corn ripening on the stalks, and so – hungry, with their fig trees gone – they came to eat the crop. Although the farmer had taken everything from the forest he was angry at having to give anything back and he decided to teach the greedy monkeys a lesson. Monkeys are like men, they are greedy and easy to trap, so the farmer made a trap and baited it with some of his precious corn.

The next day when the farmer returned to check his trap, he found a monkey caught in the small wooden cage. In its fear and confusion the little monkey had not eaten any of the corn. Being a young monkey it was easy for the farmer to subdue and take out of the trap.

Looking at the frightened monkey, who was grimacing in fear, the farmer felt nothing but anger, affronted that this little thief should steal from him – a hardworking farmer. He called his friend, a nearby farmer, over to look at the little villain. “Let’s teach this thief a lesson,” he said to his friend.

There is no account of what the friend did, but one hopes he turned away in shame as the farmer began to torture the little monkey. There is no need to recount what he did, suffice to say the little creature was finally released, dazed and broken, to crawl back into the forest and die – a lesson for all the other greedy monkeys. 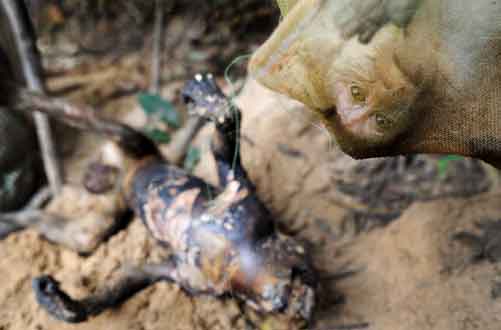 The farmer wanted to send a message to all the other naughty monkeys... Credit: Jeremy Holden/FFI

Sometime later the farmer started to notice things happening to his body. His hands became painful and his fingers curled up as if they had been broken. Sores developed on his stomach as if he had been burned with a lighted cigarette. There were other complaints, too, and with dread the farmer realised that they were the same injuries he had inflicted on the little monkey.

The village doctor was baffled by the farmer’s symptoms, and none of the medicines he prescribed had the slightest effect. The farmer grew sicker and frailer and could no longer tend his farm. Without the rain of poisonous insecticides the small creatures returned, and with them the birds. The first jungle pioneers crept back, and monkeys came down to eat the sour tamarillos ripening on the tree the farmer had planted.

Within one year of capturing the monkey the farmer died too. Only one man in the village – the farmer’s friend who had seen what he did to the monkey – knew why the farmer had died. Perhaps thinking of the farmer, perhaps of his own redemption, he suggested to the family that they bury the farmer in his farmland at the foot of volcano. “He had loved that land so much,” the friend explained.

True or not (and I felt no desire to verify it) the message of the story seems seemed clear, profound and wise, and one that humans have told since the beginning of time.

The West African pygmies have a similar tale of what befalls a boy who captures a bird because he is enamoured of its song, while the Native Americans proclaimed, “what we do to the web, we do to ourselves.”

The message of this particular myth has perhaps never been so ignored, and yet been so important, as it is today.