A bitter pill to swallow

The latest trend in traditional medicine appears to be ivory from the casques of the helmeted hornbill. This may well result in a serious threat to the survival of yet another species in Borneo. It is not the first (following the rhino, pangolin, flying fox…) that has either become extinct or seen populations severely decimated.

The thought occurred to me recently that maybe conservationists can take back control. Should we perhaps start our own counter-rumours, extolling the incredible healing powers of species that are very common and can easily reproduce?

The sudden hunting of helmeted hornbills caused me to speculate that somebody will have claimed that a person was cured of a serious, life threatening disease by drinking a concoction of helmeted hornbill casque ivory. In exasperation, I remarked that a rumour spread encouraging the consumption of something gross and unpalatable, like a common species’ faeces, would also result in a ‘miraculous cure’.

Reflecting on this I wondered if there has been any research on the psychology of medicine in Borneo or Southeast Asia.

From living in Borneo, I can tell you it is very common for people to ask others about medicines, both traditional and chemical, that – based on personal experience – cured a certain illness. Linked to this is the common expression that a certain (chemical) medicine is ‘cocok’ (appropriate) for that person. This hints at the belief (and possible fact) that there is a relation between a person (genetic make-up, lifestyle, condition etc.), the disease that person is suffering from and the type of medicine required to cure the condition.

I suspect that this way of identifying potential medicines or cures has a strong link to sudden ‘wonder cures’, both plants and (more often and persistent) animal species. When people have family members with serious life-threatening diseases, any information on possible cures is understandably followed, irrespective of supposed scientific evidence on the (lack of) effectiveness of this medicine.

Unfortunately many of these cures and supposed recreational enhancers happen to be animals (mammals) – and it seems the rarer the species, the more powerful the result is thought to be! 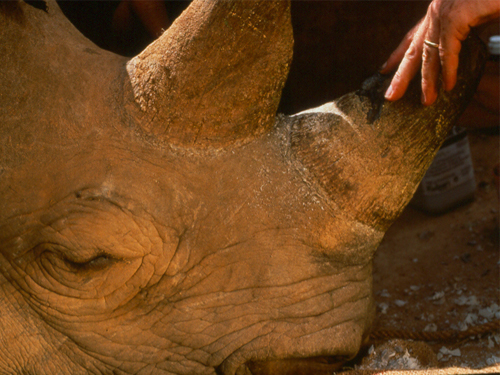 Rhino horn is believed to offer a cure for headaches, fevers and other illnesses. Credit: Rob Brett/FFI.

This gives rise to several questions: how do the rumours about these wonder cures start? Do they originate from a person who got cured, or are they started by traders to create business? Is it mainly the scarcer species that are believed to have medicinal powers? If so, is there any relation between the fact that it is rare and difficult to come by, and the supposed healing powers (because a big effort is required to obtain the medicine)? Does something similar apply to ‘gross’ medicine? I.e. if something is disgusting (and therefore hard to swallow, requiring a ‘sacrifice’ from the patient), would this increase the belief that it must be good and potent?

What does this have to do with saving species? There have been several attempts by conservation organisations to denounce (through scientific evidence) claims that rhino horn is the best aphrodisiac on Earth. But it seems that success has been limited, given the recent surge in rhino killings across Africa.

It seems to me that a better understanding of the psychology of medicine in Southeast Asia should be a first step for conservation organisations trying to prevent further species extinctions due to supposed medicinal function.

Information will be needed from anthropological studies on the history of medicines and curing in the region. Data on the difference or similarity between groups in society will be relevant as well, to increase understanding: for example, do people with limited access (physical or financial) rely more on traditional medicine, including or excluding wonder cures (which may be beyond their means)? Or is it the more affluent middle class that are the main consumers (as indicated by the surge in rhino poaching that is being linked to increased purchasing power of the Chinese middleclass)?

This increased understanding should inform strategies and activities of conservation organisations to address the problem of species extinction due to traditional medicine trade.

I think that the use of scientific evidence to discard certain medications is not the most effective approach. What is the alternative? Is it, like I’ve been personally tempted to do, spreading rumours about placebo wonder cures? This brings up its own set of ethical issues. What is worse: spreading unfounded rumours to save species for future generations, or inaction when faced by scientifically unfounded rumours of wonder cures that drive species to extinction?

A similar dilemma is faced by doctors in the USA regarding the prescription of placebos that have proven effective for many minor illness and psychological disorders. The ethical question is whether or not the doctor should be allowed to pretend to provide a medicine that is in fact a placebo.

What is right or wrong?