10,000 turtle hatchlings released back into the wild

More than 10,000 olive ridley turtle and 30 green turtle hatchlings have been released at La Flor Natural Reserve beach in south-west Nicaragua, thanks to the collaborative efforts of the Ministry of the Environment and Natural Resources (MARENA) and Nicaraguan Army.

These turtles are at serious risk from poachers who illegally harvest turtle eggs. Hatcheries allow conservationists to keep turtle eggs safe from poachers, and once the turtles have hatched they can be released on the beach. A release on this scale is great news for olive ridley turtles which are listed as Vulnerable on the IUCN Red List of Threatened Species. 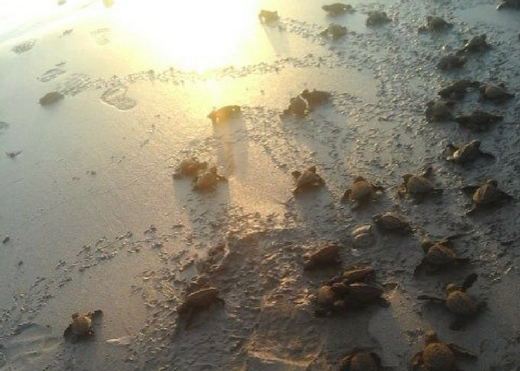 Olive ridley turtles are famed for their arribada (mass nesting behaviour) which takes place between July and January. Before the start of each season, Fauna & Flora International (FFI) holds a training workshop on ‘Arribada beach patrols’ for community patrollers, park rangers and the army. FFI also helps improve monitoring by providing new equipment to protect nesting turtles at night.

FFI works in partnership with MARENA, local NGOs and communities in Nicaragua to help safeguard key nesting sites for olive ridley, leatherback and hawksbill turtles on Nicaragua’s Pacific coast. Since 2002, FFI has conserved marine turtles in Nicaragua and has trained over 80 community members in turtle protection and hatchery management, achieving a rise in hatching success on key nesting beaches.