Saiga on the steppes

Kazakhstan, a vast country in Central Asia, boasts a stunning array of landscapes that support a rich diversity of wildlife including the iconic saiga antelope.

Vast steppe grasslands extend across much of the country from the Volga Delta in the west and Siberian plains in north to the Altai Mountains in the east. Moving southwards, the vista transitions into a desert landscape. Kazakhstan also features an ancient meteorite crater 14 km across.

The sad remains of the Aral Sea – once the fourth-largest lake in the world – can be found in the south-west of the country: a stark reminder of the immense devastation that can be brought about by poorly planned human activities.

Kazakhstan’s natural environment and biodiversity are suffering from the effects of human pressures – both current and historical.

Despite this, the country is still home to an astonishing variety of species, including over 6,000 vascular plants, 178 mammals and 489 bird species.

With the country undergoing much needed economic development, good stewardship of its rich natural heritage is now more important than ever.

Kazakhstan is located in Central Asia. It is bordered by Russia, China, Kyrgyzstan, Uzbekistan, Turkmenistan and the Caspian Sea.

of the country is made up of steppe grassland and deserts.

of Kazakhstan’s 5,000 mushroom species are found nowhere else on Earth.

Our work to protect Kazakhstan’s biodiversity

Fauna & Flora International (FFI) has been active in Kazakhstan for more than ten years, during which we have worked on livelihoods and transboundary projects and targeted species conservation.

Since 2005, our work has focused on protecting the saiga antelope  on the Ustyurt Plateau – a unique species notable for its carrot-shaped horns and oversized nose. Saiga once roamed the plains of south-eastern Europe and Central Asia in their millions, but sadly numbers have declined by around 95% over the last 20 years as a result of poaching for their distinctive horns, disruptions to migration patterns and a number of near-catastrophic mass die-off events.

Thanks to a grant through the Species Fund, we are currently supporting our local NGO partner Association for the Conservation for Biodiversity Kazakhstan (ACBK) to monitor saiga in Kazakhstan, where most of the remaining population is found, to understand saiga movements and also to inform the work of a new ranger team that has been established on the Ustyurt Plateau.

We are also working with ACBK to support the Kazakh government via a grant from the US Fish and Wildlife Service, to address the illegal trade in saiga horn, which is making it much harder for numbers to recover after the die-offs and pushing the entire species dangerously close to extinction. This work includes research into illegal trade networks and routes, as well as supporting the development of sniffer dogs trained to detect saiga horn, which are being placed at key border crossing points.

Learn more about our work in Kazakhstan

Key species we work with in Kazakhstan 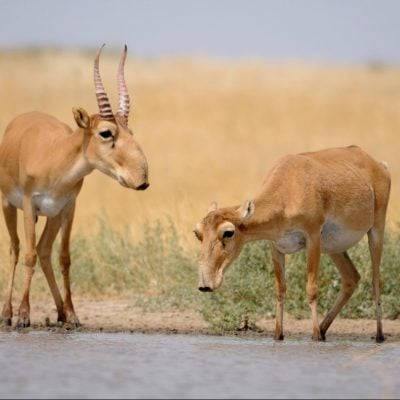 Although at first glance they may not seem as impressive as craggy mountains, grasslands are anything but boring - and without them we would miss out on some of nature’s most remarkable spectacles.