The diversity of life on Earth is astounding. Over the course of several billion years, myriad life forms have evolved to occupy every last niche of our planet, including even the most inhospitable areas such as blisteringly hot deep-ocean vents, relentlessly dry deserts and the freezer-like temperatures of Antarctica. A single rainforest tree can host as many as 2,000 species of insect, bird, reptile, amphibian, mammal, fungus, moss and other plants. Tantalisingly, the 1.2 million species already identified are merely the tip of the iceberg. The vast majority of the world’s biodiversity – including over five million varieties of insect and more than two million marine creatures – has yet to be described.

mountain gorillas are left in the wild. Though numbers are still worryingly low, conservation efforts are helping to turn their fortunes around.

tree species are in danger of extinction, along with almost 8,000 species of fish, amphibian, reptile, mammal and bird.

Sadly, this jaw-dropping super-abundance of life is under massive pressure from a rapidly expanding and all-consuming human population whose indiscriminate harvesting and plundering of the planet’s natural resources has reached unsustainable levels. As fossil records tell us, species extinction is not a recent phenomenon; however, thanks to human activities such as habitat destruction and conversion, and commercial exploitation of wildlife, the current rate is one thousand times higher than the natural extinction rate.

Almost 8,000 species of fish, amphibian, reptile, mammal and bird are officially categorised as globally threatened, and over 9,600 tree species are in danger of extinction. Alarming numbers of species – including some of the most charismatic and best-loved animals on the planet – are joining the critical list. The recently discovered Myanmar snub-nosed monkey was declared critically endangered almost as soon as it had been given a scientific name.

And those are just the species we know about. Given the vast number of life forms that remain unidentified, it’s a race against time to find out exactly what biological riches are out there, and to protect them, before they are lost forever.

Why does it matter?

There is a powerful argument to be made that all creatures have the right to exist, and that we have a moral obligation as humans to ensure that our actions do not cause their demise. When a species goes extinct we can never bring it back, and that loss, however apparently insignificant, impoverishes us all.

But there is also a more pragmatic reason to protect biodiversity. The availability of so-called ecosystem goods and services – clean water and breathable air, climate regulation, flood protection, timber, pharmaceutical ingredients, pollination and recreational spaces, to name just a few – relies on the health and stability of natural ecosystems such as tropical forests and grasslands. Since ecosystems are the sum of their parts, their health in turn depends wholly on the diversity of species that keep the system running. The extinction of a species, therefore – or even key populations of a species – could tip the balance, causing the collapse of entire ecosystems and the services they provide.

The good news is that there are passionate and committed people around the world working tirelessly to protect species known to be at risk of extinction. Technological advances, innovative research and collaborations offer hope and allow precious funds to go further than ever before. Efforts to protect charismatic flagship species and ecologically critical keystone species help raise additional funds to protect habitats that benefit many other species. We have the power, especially when we work together, to turn around the fortunes of species that are fighting for survival, and there is no shortage of inspiring stories about conservation initiatives that have brought species back from the brink – many of them from Fauna & Flora International (FFI).

The loss of a species is a tragedy in itself, but with every extinction we also risk unravelling the ecosystems upon which all life depends. We have a plan to stop all this, but we urgently need your help.

Our work with the world’s most at-risk species

FFI is justifiably renowned for its success in safeguarding some of the most spectacular and iconic wildlife on the planet – from mountain gorillas and rhinos in Africa to Sumatran tigers in Asia and the Arabian oryx in the Middle East. But we also have a strong track record in championing the neglected and unloved species that might otherwise fall between the cracks. Visayan warty pigs, Siamese crocodiles, Ziyuan fir trees and the recently described Hon Chong ghost snail are not exactly household names, yet that does not deter FFI from focusing attention on these relatively unfamiliar species, all of which are critically endangered.

Preventing a species from sliding into oblivion is a complex business, and there is no one-size-fits-all solution. It may entail raising awareness of its plight and importance, protecting or restoring its habitat, captive breeding, improvements in legislation and law enforcement, removal of invasive alien predators, or even changing former hunters into committed conservationists. More often than not, it requires a multifaceted approach, and it invariably involves working in partnership, particularly with the communities in whose hands the fate of all species ultimately lies.

FFI’s last-ditch heroics on behalf of a harmless and gravely imperilled Caribbean serpent are a prime example.

The Antiguan racer was declared extinct in 1936, a victim of the Asian mongooses introduced to the region by plantation owners. At the time of its rediscovery in 1995 on a tiny, rat-infested offshore islet, it was probably the world’s rarest snake, with a total population numbering just 50 individuals. 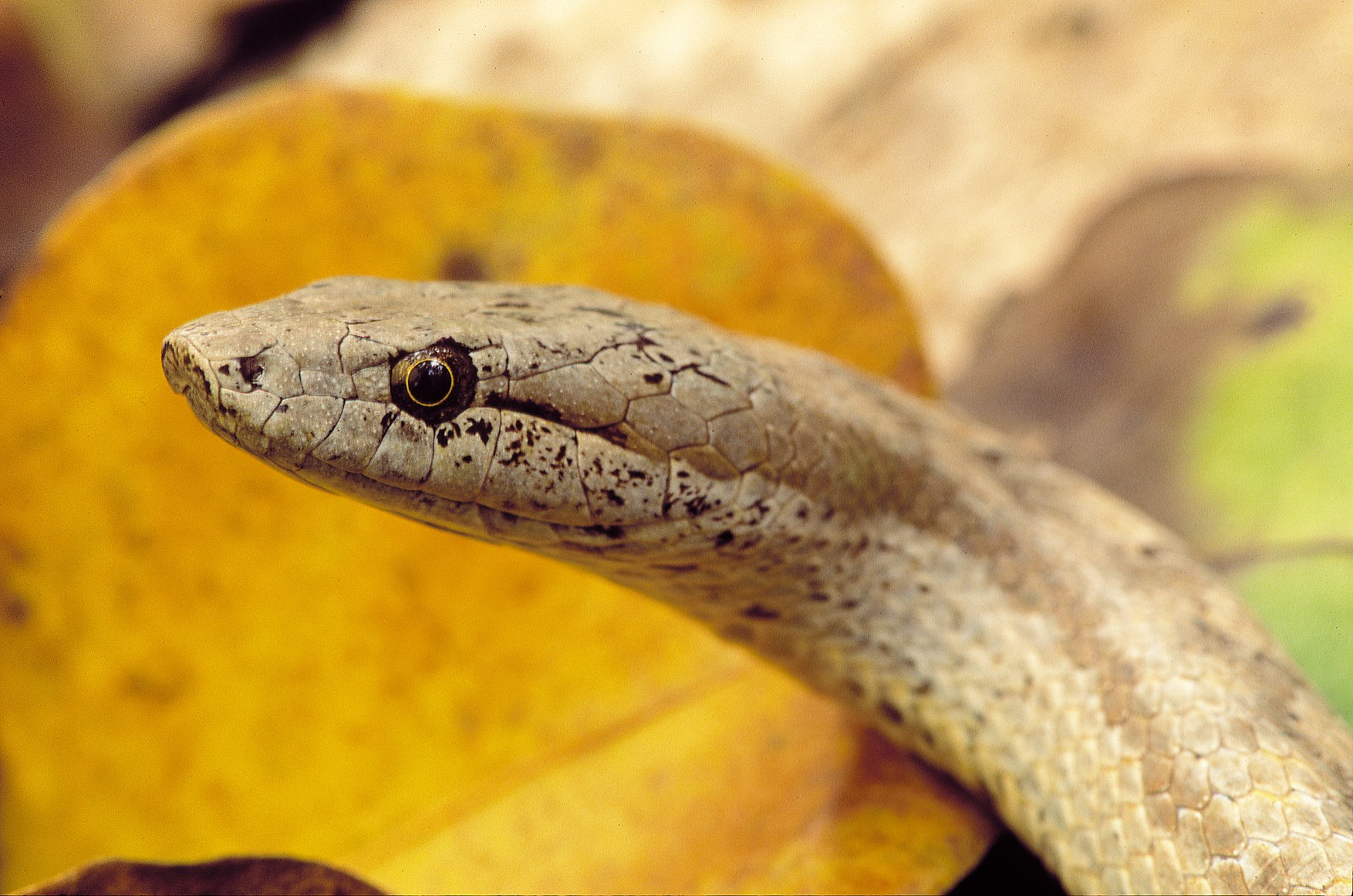 Some conservationists advised against intervention on the basis that the snake was too rare and too unpopular. Undaunted, FFI and its partners launched a recovery programme that included eradication of invasive alien predators, a nationwide public education campaign and reintroduction to rat-free islands. Barely two decades later Antiguan racer numbers exceeded 1,000, a twentyfold increase in the overall population. The snake has become a source of national pride and a standard-bearer for Antigua’s biodiversity as a whole. We have since embarked on a similar rescue act for its Caribbean cousin, the critically endangered Saint Lucia racer.

“I am so glad we have proved the doubters wrong, and helped turn around the fortunes of this unique and lovely animal.”

In 2016, FFI established a new Species Fund specifically devoted to improving the survival prospects of species at severe risk of extinction, by restoring key populations to viable levels over the next two decades. The fund has already supported a number of FFI projects including work in Nicaragua to stabilise and rebuild a critical sub-population of hawksbill turtles.

The Species Fund also allows us to intervene swiftly when sudden crises threaten the future of species that are already in grave danger, or when there is a time-limited opportunity to improve the outlook for such species. This emergency funding has allowed us, for example, to act quickly to support the saiga antelope during a devastating mass die-off in Kazakhstan and to tackle an upswing in poaching of elephants in Mozambique’s Chuilexi Conservancy.

Learn more about our approach to saving threatened species

What you can do

The most effective way for you to help save Sumatran tigers, mountain gorillas and other critically endangered species is to support FFI’s vital work. As a charity, we depend on donations and the support of our members to fund our projects. Find out how you can help us.

From tigers to turtles and from baobabs to bees, we are working hard to protect some of our planet’s most spectacular species. Read on to learn more…